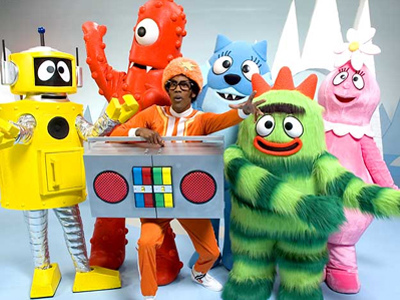 Photo by PixelManiatiK
hi amy,
i’m a stay at home dad, and despite my best efforts, i spend about 113% of every day in a state of general confusion as i chase around after my 2 boys (one is turning 3, one is 9 months). i’m sure you get tons of crazy and/or stupid questions as a result of your blogging, but i thought i’d add one more and see if you can help me out anyway.
can you recommend some kiddie tv shows for a 3 year old boy? we’re snooty no-tv-be-having people and i’m completely out of touch with what kids watch these days. connor (the 3 year old) is a HUGE blues clues fan, but i think it’s time to um.. expand his horizons.. a bit. (does kiddie tv expand horizons or is it really more of a zombie-robot-babysitter thing? i’m good with either…)
thanks!
-dave
Attention to all parents out there who immediately get het up and judge-y whenever the topic of children and TV comes up: You probably want to leave now.
Yes, I let my three-year-old watch TV. Sometimes multiple times a day. Sometimes I totally use the TV as a babysitter — while I get work done, take a shower, prepare dinner or (GASP) just want to sit on the couch and stare blankly and blissfully at the wall for 22 minutes. We’ve probably sampled most of the popular preschooler television programs out there. Like your son, Blue’s Clues remains our longest-running favorite, the first show that Noah ever watched and still adores. He probably learned most of his preschool concepts before starting preschool thanks to that show. But like you, OH MY GOD, I have seen every episode multiple times and the thrill of “MAILTIIIIIIME!!!” really starts losing its appeal after the millionth trillionth time.
Below, I have compiled a list of some of the shows we’ve loved and hated, with both my assessment and a review from Noah, Preschooler TV Connoisseur.
Thomas & Friends
Noah: Thomas! Thomas Thomas THOMAS! Look, a windmill! Look, a train! Look at me completely lose my mind every time this show comes on OMG!
Amy: Much like the Steve vs. Joe debate, I have strong opinions about the different narrators (Ringo vs. Carlin vs. Baldwin vs. Other Guys I Don’t Know). I also cannot really stand this show in general, but it gets big points for each segment being 10 minutes long, meaning I can trick my child into thinking he’s getting to “watch a show” and still get out the door for preschool on time. (Similar to our Scholastic DVD Collection — worth every penny for these short, perfect bribe/reward-sized storybook segments.)
Summary: A strange show from another age, but teaches kids about facial expressions, manners, responsibility, OMGTRAIIIIINS.
Pinky Dinky Doo
Noah: Over it! Except for my Pinky doll, who is still kind of my lovey, but I will deny it and hide her under my bed if you walk in my room and catch me talking to her.
Amy: Noah’s obsession with this show burned fast and bright, but one day he simply did not want to watch it ever again. I deleted the pass from our TiVo but kept his favorite episode about the Cheese Monster just in case, because I know the instant I delete it he will suddenly be all about the Cheese Monster again.
Summary: A good show with a strong, smart female lead that isn’t pushed as a “girl” show, UGH. Teaches kids big vocab words, narrative elements of storytelling, using your imagination.
Wonderpets
Noah: Also over it.
Amy: The animal parents on this show need to be reported, good God. Your baby bird has just been rescued from certain destruction when you left it in its nest ON TOP OF A VOLCANO and then you come back all, “Oh! I was so worried! I looked everywhere for you! Except…you know…OUR NEST.”
Summary: Animal negligence aside, this is a very well-animated show that is actually pretty cute. Lots of music, focus on teamwork, animals and their habitats. Noah will still watch it, but doesn’t request it or anything.

The Upside Down Show
Noah: Mommy, why are you making me watch this show?
Amy: QUIET, Mommy is watching her stories.
Summary: Well, I love this show. The hosts are hilarious physical comics and the show emphasizes a lot of modeling, imitation and pretend play. Plus, it’s silly. Adorably silly.
Dora the Explorer
Noah: (small voice) I’m scared of the Map.
Amy: (loud voice) I HATE THIS SHOW.
Summary: I’m glad the Map freaks Noah out (he doesn’t like when it flies off the screen at you), because this show bugs me. But again, strong female lead that appeals to girls AND boys, teaches kids about sequencing, Spanish vocab, unrealistic images regarding your standard backpack capacity.

Go Diego, Go!
Noah: Eh.
Amy: Eh.
Summary: A Dora spin-off. Like Dora, but with a boy! And a jaguar instead of a monkey! And a Rescue Pack instead of a Backpack. And Rosie Perez instead of the Map. Yeah, that helps.

Ni Hao, Kai Lan
Noah: Seriously?
Amy: The Dora Machine must be stopped.
Summary: Another Dora clone. Only with Mandarin Chinese instead of Spanish. Animation is very Hello Kitty Hearts Sparkle Rainbow Power. Could very well be adorable and well-done, but Noah wandered out of the room during the opening credits the first time it was on and we’ve never tried again.
Calliou
Noah: Wait, what’s this show…
Amy: Noah! Quick! Look over there! It’s a train or something (frantically turns TV off)
Summary: MAN, does that kid whine. Like a salad fork in the brain, this show.
Backyardigans
Noah: Big fan. Really big fan.
Amy: The animation ain’t Pixar, but I am SERIOUSLY impressed by all the effort that goes into these episodes. It’s like a Broadway musical every day!
Summary: The music is the best part of this show, hands down. I guess there’s lessons to be learned about imagination and playing nicely, but really, it’s about the music.
Jack’s Big Music Show
Noah: Puppets are awesome.
Amy: JON STEWART! JOOOOON STEWART!
Summary: A super-fun music/variety show, featuring music and bands for kids that you actually won’t mind. Brought to you by some of the writers/puppeteers of Sesame Street. And also one time Jon Stewart guest-starred. The end.

Sesame Street
Noah: Eh.
Amy: WHAT IS WRONG WITH YOU, CHILD?
Summary: Oh, Sesame Street. So many memories, so many overhauls and reformatting decisions and attempts to compete with the newer shows have honestly left it as a shell of what we remember. Noah is completely bored by it, but he LOVES watching the old-school clips of my favorite songs and animated shorts on YouTube.

Yo Gabba Gabba!
Noah: Best. Show. Ever. Besides Blue’s Clues, I mean.
Amy: I may have bought some music from this show on iTunes. I may listen to it in the car when I don’t actually have any children in the car.
Summary: This show originally seemed kind of off-putting and frenetic to me, but it is currently our reigning champion show of shows, with a devotion that is eclipsing Blue’s Clues. Lots of hipster icons, celebrity guests, 80s video game animation, indie rock bands…and at the heart, a really earnest show that teaches social skills and self-help concepts. As a parent of a kid who admittedly struggles in these areas, it’s been a HUGE help as we try to get him to interact with other kids, talk to them, take turns, try new foods, brush his teeth, etc. Thank you, Gabbaland.
Okay, I could probably list a dozen more, but I think it’s time to stop and hand this column in, so I shall leave it up to the commenters to mention all the many good, bad, middling shows that I’ve left out. But I will say this: whatever you do, if you ever see something called “Lazytown” in your TV guide or on sale at the store or on the library’s DVD shelf — RUN, do not walk, RUN AWAY FROM THAT SHOW. It will haunt your nightmares, it will haunt your dreams, it will have you singing that stupid freaking cake song for days and days and days. You have been warned.