Should We All Lighten Up About Barbie? 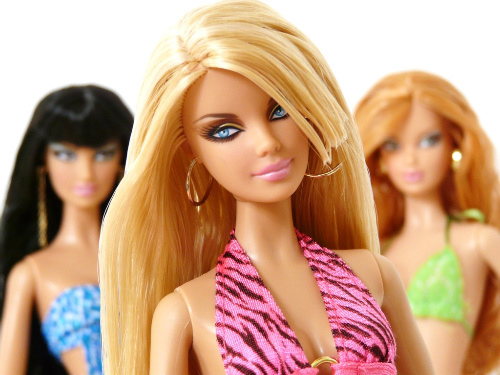 Recently in Babble, there was a Smackdown on the topic of Barbie: Yay or Nay? Both writers ended up on the same side, which made the Smackdown decidedly… un-smackdowny. No one was smacked down, in other words. There was no smacking. Down. Jeanne Sager and Mike Adamick both gave Barbie, in the end, a reluctant yay. Actually, more like an naaaa-okay.

Like most of us modern feminist liberal parents, Jeanne Sager never expected to buy her daughter a Barbie. And she didn’t. But then her daughter received one as a gift—and fell in love. ” I didn’t even know she knew who Barbie was,” Sager writes. But she did, and she knew it was something to covet.

So her daughter showed a moderate level of interest in Barbie, undressing her and dressing her over and over. Eventually she moved on to other toys. And in the end, what happened to her daughter? Nothing. “It’s a doll,” observes Sager. Just a doll that doesn’t have any more hold over her daughter’s psyche than her other toys. “She seems no more attuned to her own body after playing with a Barbie, no more obsessed with hair, clothes, make-up or weight.”
Mike Adamick’s daughter also received a Barbie for Christmas, much to his consternation. He worried that Barbie was a less than exemplary role model for a girl’s evolving notion of herself. He knew of a young girl who wanted to diet, to be more like her Barbie. “Some young girls see Barbie, want her body and then destroy their own. After all, isn’t Barbie a model for the perfect female?”

But then he, too, found that Barbie didn’t have much of an impact on his kid. Eventually, he realized there’s a lot more that influences a girl (or a boy) than just a single toy. “It dawned on me,” observed Adamick, “that I, her father, probably have a lot more sway over how she will one day view herself and her body than some stupid doll.” So it turned out that Barbie wasn’t the evil soul-killing machine out to destroy their daughters’ fragile self-identities—she was just a doll. A doll with exceedingly weird proportions, sure. But at least she wasn’t a Bratz. Those are insane.

I’m interested to hear what you guys think about Barbies. I don’t have a daughter, but I was a girl—a girl besotted with the world of Barbie. I had the Barbie Dream Boat and the Barbie Airplane and the Barbie Corvette. I had an entire tiny Barbie wardrobe filled with numerous Barbie outfits. I can still remember picking out those tiny get-ups in the toy store, with their eensy shoes. I just salivated a little. Over tiny plastic shoes.

I don’t ever remember feeling that I had to look like Barbie. I didn’t gaze into Barbie’s face and dream of someday being that beautiful. Barbie didn’t really do it for me, looks-wise. I was more into the Barbie accoutrements than the doll itself. First of all, she had feet that left her permanently on tippy-toe, the better to fit her high heels onto. Her hair was way too big for my tastes. And she didn’t even have nipples. Barbie was a blank slate, waiting to be clothed and sent off on an adventure. Barbie often interacted with the Hulk and the Green Lantern or visited my doll house, where she walked amongst all the stubby doll house figures like some benign, mute super model. Barbie was part of a much larger imaginary world, for me.

I have plenty of friends who were forbidden Barbie, and if you were to look at us all together, I don’t think you would pick out the Barbie owner among us. I don’t wear heels. I am unlikely to dress as a flight attendant. My hair is not bleached blonde. I have never suffered an eating disorder. I don’t think Barbie inflicted any lasting damage.
But Barbie today is different from the Barbie I grew up with. I couldn’t help but notice, on a recent visit to Target, that the Barbie wardrobe had taken a definite turn for the, well, trashy. I might feel less comfortable purchasing a Barbie for my daughter if it meant that she would parade around my house in fishnet stockings, a yellow mini, and a silver tube top. I don’t know what the current Barbie accessories are, so if they’ve moved away from vehicles and toward, say, princess castles, I would be less than happy. This is where I defer to the current parents of daughters. What’s your stance on Barbie? What have your experiences been? Is Barbie dangerous, or benign?