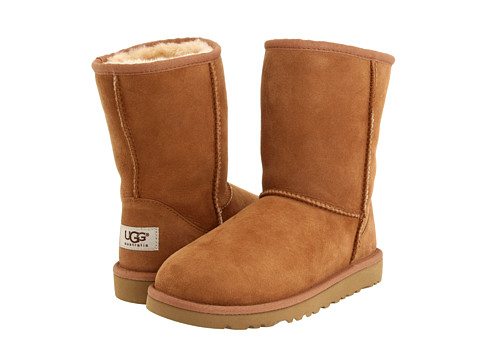 Ugg Envy: When Your Child Wants a Name Brand and It’s Just Not in the Budget

My 8-year-old daughter recently came home, pointed to her boots and said, “Two of my friends told me these aren’t real Uggs. I want real Uggs.”

Oh man. My daughter’s knock off Uggs are from The Children’s Place. I don’t remember what I paid last fall but it was probably 20 or 25 dollars.

And then my 6-year-old chimed in. “Yeah, I want real Uggs too.” (Luckily, my 2-year-old twins were mum on the issue.)

Spending between $200 and $300 for two pairs of boots is not in our family budget. But I understand the longing. I remember as a child wanting a Ralph Lauren Polo sweater so badly I thought I would just die if I didn’t get it. I didn’t get one. I also didn’t die.  But the longing was so real, I can still feel it decades later.

Kristin Kutscher, a Manhattan mom, says her daughter wears Ugg knock offs. “I wouldn’t buy my daughter real Uggs because I can’t afford them – plain and simple.  And I have no qualms about telling her they are too expensive. If I can afford something, and she wants it, then I can try to buy it for her.”

Colorado mom Daphne Biener’s 12-year-old daughter longed for a pair of Nike Free Runners which can run as high as $100. “We did consider it until I saw the insane price tag,” Biener says. They found a look-alike pair for $40 and her daughter was fine with it because they were very similar in style to the Nike’s.

But sometimes it’s not about shoes or a certain clothing brand. Karen from Brooklyn says for her 8-year-old daughter, it’s all about American Girl dolls and they don’t come cheap. For example, Saige (the so-called girl of the year) is $110. “My daughter is obsessed with American Girl (she has one), and obsessed with which friends have which dolls, and she knows exactly how many her friends have, and which accessories. It’s insane,” says Karen.

So what do you do when your child is begging for an expensive item that you simply can’t afford?

Experts says that it’s important to not just say no but explain to your child that the money needs to be spent on food and other needs for your family. Your child will be disappointed and it’s important to listen to their emotions. They should feel heard and loved which is ultimately far more important than any object.

Sometimes a compromise can be reached. If there is some “must have item,” give your child some options.  They can wait for a sale, request it for a birthday or save up their own money.   Some parents will chip in what they were willing to spend and the child has to make up the difference. Once a kid realizes they have to invest their own money, the item can become a whole less desirable.

And another possibility is that sometimes a coveted item can be found second hand through families with older kids or online, which also teaches eco-responsibility.

My children’s desire for Ugg boots seems to be on the back burner for now since it’s spring.  But come autumn, I will likely be dealing with this again. My inclination is to let my daughters have them if they can figure out a way to buy them for themselves and I’ll chip in a small amount.

But enough about my kids. Who is going to buy me that Polo sweater?