Twitter Facebook Pin It Email Article
Prev Warning: Smoke Alarms May Not Wake Your Children! Next Thinking Of Boston 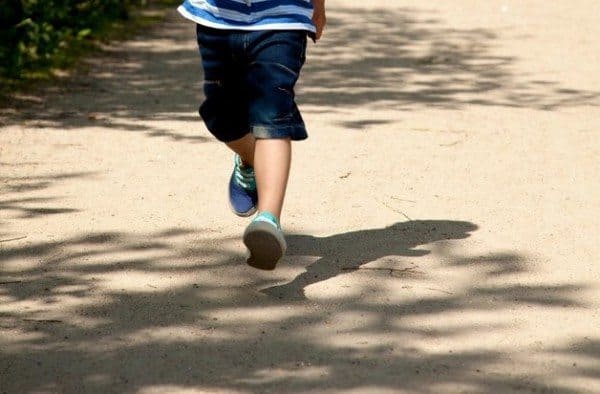 When Your Toddler Won’t Stop Running Away From You

Thank you so much for all of your columns. You have been a huge part of my parenting experience, and your sage advice and humor have been so helpful. Now I’ve stumbled onto a problem that I need your help with, and it’s something that has been gnawing in the back of my mind for a while now.

I have a 2.5 year old and a newborn, both boys. The transition to two kids has gone surprisingly well. My oldest seems to adore the baby, and my husband and I have been splitting up responsibilities between the two boys while I’m on maternity leave (my husband stays at home and will have both boys solo in a month). Here’s the problem–my two year old LOVES to run. Loves it. As in, he’ll run older children and my husband ragged at playgrounds and then beg for more games of “get you.” BUT he lacks the common sense to not run into traffic..or off a cliff…or (insert some other horrific scenario here).

In the past, my husband has always been able to catch him before something awful happened…but that won’t be always be doable when he is also responsible for watching the baby. We’ve tried everything you could imagine to get our son to heed our screams of “STOP”!” We’ve discussed “being really careful around cars, because they can really hurt you.” We make a big deal out of holding hands to cross the street. We praise him on the very rare occasion that he does listen to us. Nothing really seems to sink in. It’s still a game to him, and we are totally losing. We want to take him to playgrounds, parks, etc. without constantly worrying about him bolting. Once I go back to work, I don’t see a solution to this problem that doesn’t involve him being a.) constantly on a leash or b.) barricaded at home. Any thoughts?

Ahmahgah, this question gave me a raging bout of toddler-PTSD with a side of hives. Noah went through this phase right after Ezra was born, when he had just turned three. It was…awful and stressful and I can still hear the horrible, angry loud voices his father and I used with him after one particularly bad and dangerous incident in a parking lot, just a few weeks after his brother’s birth.

That parking lot, ironically enough, was attached to our local big-box baby store, where we were attempting to buy a double stroller. We didn’t buy a double stroller before Ezra was born because I didn’t think we needed one — Noah was too big for a stroller and never rode in one! Double strollers are big and bulky and I planned to use slings and carriers for the baby anyway! That way my hands would be free to hold Noah’s and corral him as needed! HA HA THE PERFECT KNOW-IT-ALL-Y PLAN.

We did not buy a double stroller that particular day either. Because NOAH WOULDN’T STOP RUNNING AWAY FROM US and we bailed on the shopping trip in angry, sleep-deprived frustration.

But yeah, we caved and bought a double stroller.

(The Phil & Ted’s, which was face-punchingly expensive. But AT THE TIME [2008], it was the only option that would accommodate both a newborn AND a child Noah’s size. I believe there are other, cheaper models available “these days,” but I’m useless on a more up-to-date recommendation. We reused the Phil & Ted’s stroller a bit for Ezra and Ike, but of course EZRA never did the running-away thing so I actually WAS able to keep Ike in a carrier most of the time and trust Ezra to stay with us and follow Noah’s lead. But I maintain that it was simple peer pressure, not maturity or common sense, that kept Ezra by my side.)

(Though Ezra’s the only one I’ve full-on lost in a store so far, and had to alert the store’s CODE PURPLE or whatever on the employees’ walkie-talkies.)

(I found him trying on sunglasses two minutes later.)

Because here’s the thing: You can teach. You can lecture. You can explain and explain and explain. You can (and will) yell and scold and grab their little shoulders in your shaking hands while you beg through tears that they NEVER DO THAT AGAIN, SO DANGEROUS. You may even decide that a dangerous situation like running into the street justifies a swat on the butt (let’s be clear, not condoning it). None of that will necessarily solve anything or keep them safe, because they just DON’T GET IT YET.

At this age, toddlers have no fear and even less sense. They’ve discovered that they are independent from you and find this independence to be thrilling and tempting and yes, a little scary. So they want to test that independence. What happens when I go this far? What happens if I run over this way? Can she find me? Can she see me? It’s like a game of peekaboo TO THE EXXXTREME.

So the idea is to find places that let them explore that independence in a safe way, like at playgrounds (obviously with closed gates). Obviously these places have limits too — don’t go into the woods, don’t sit in the mud, etc. — but for the MOST part you can loosen your helicopter goggles a bit and not freak out if he isn’t in your direct line of sight for a couple minutes. When Noah was most prone to running, we found that indoor playgrounds and toddler-friendly museums were our best bet. Even if he completely vanished, there was a DOOR and STAFF and WRISTBANDS and UV STAMPS and such. We always, always found him.

And honestly, it was a good experience for US, too. To get used to his independence and the realization that we couldn’t shadow him 24 hours a day now that we had another child. And that maybe we shouldn’t even feel so compelled to do that anyway. Let him go a little more free-range, within reason. And hope that the times when we did let him roam more free would help curb the temptation to break away from us in more dangerous situations.

That said, we went pretty hardcore when it came to curbing the running in places/situations where it simply WASN’T safe or acceptable. I didn’t trust him to stay on one of those sibling caboose/scooter stroller attachments and figured a toddler leash would just result in him sitting down or going “boneless” in protest. So I put his giant self into a stroller with a full harness. He hated it; I wasn’t a fan either. But it got the job done and the point across. He’d ask to get out and walk and I’d agree and re-explain the rules for the millionth time: No running away. Stay where I can see you. Keep one hand on the stroller, etc.

If he obeyed, he got to stay out of the stroller. If he didn’t, he went back in. (Although no, I have no advice for how to deal with all the judgmental glares and looks from other adults as you forcibly wrestle an oversized, protesting toddler back into a stroller. Just prepare to be humbled and regret every time you ever judged another parent out in public. Bonus points if you’ve ever thought, “That child is too old to be in a stroller.” HAHAHAHAHA.)

The thing is, this IS just a phase. It WILL pass. The common sense thing about traffic and cliffs and strangers DOES eventually click for them and they realize that their own fool self-preservation kind of depends on staying with you. The best way through it is through.

Put him back in a stroller for awhile and keep doing everything else that you’re already doing. Preserve your grown-up sanity by dividing up the errands so one of you goes shopping WITHOUT your Thelma-and-Louise-ing toddler, and only take him along when it’s absolutely essential. (We were also fans of the “one parent and kids stays in the car while the other goes to the store for the damn batteries/diapers/whatever thing we just remembered we’re completely out of.”) Take him places where he is free to run and bolt to his heart’s content, and practice letting him do exactly that and with being okay that he might be hiding in a tunnel or behind a tree. Work on reminding your brain that a kid on a playground is PROBABLY going to stay on the playground, rather than letting it immediately jump to the worst-case scenario that he ran back to the parking lot or into a non-existent ravine or a reality TV producer in the 15 seconds you spent wiping spit-up off your infant. Take the baby out solo in a sling and laugh at how “easy” you had it and didn’t even KNOW how “easy” you had it.

And don’t feel guilty if you decide to pass on some awesome activity (street fair! circus! etc.!) because you can’t keep him in a stroller and don’t feel like chasing him the whole time. We made that mistake because we were totally overcompensating for…I don’t know…ruining Noah’s young life by giving him a sibling. In hindsight, WHATEVER. We should have stayed home and done those awesome activities after he outgrew the running phase, since we all would have had more fun and yelled/chased/bailed less.