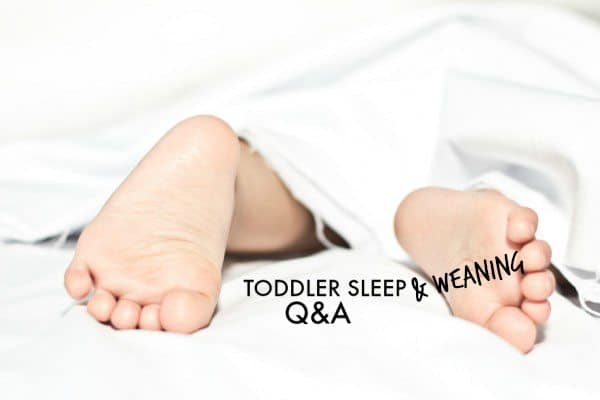 The Milk is Gone, the Comfort Sucking Remains

I’ve been reading your blog since your pre-Noah hilarious-microwave-cookbook-commentary days. I think someone linked to it in their AOL instant messenger status. I am on old person!

Anyway, I’ve been through the archives and you’ve given sound advice on gently weaning toddlers but not exactly on what I’m dealing with. My 25 month old has never been an easy sleeper and I’ve been nursing him to sleep since forever. At this point he usually nurses three times a day – when he wakes up, at nap time, and at bedtime. While it’s been frustrating at times to be his go-to sleep aid and endure the judgement of my extended family, I’ve mostly enjoyed our “snuggles,” as he calls nursing. I gaze into his eyes/totally zone out on podcasts and audio books. It usually takes about 10-30 minutes of nursing to get him down and in the mornings he will nurse for 45 minutes if I let him. I doubt he’s getting much milk anymore as I can hardly express anything – it’s just comfort.

The issue is my nipples are suddenly not wanting to be touched and the sensation of nursing is like chewing aluminum foil – I don’t want to do it. (Not pregnant BTW.) This has been happening on and off for a few months but now this aversion seems to be here to stay and I’m most sensitive at bedtime. I’m perfectly willing to spend the time cuddling my child, my body is just suddenly recoiling from his latch and I get a rage-y feeling which is not how I want to feel as I’m putting my child to bed. So I deal with it for as long as I can and then unlatch him and the screaming begins. He won’t just lie down with me or sit on my lap and even if he was almost asleep, he just can’t seem to relax without the boob in his mouth. He’s in a big floor bed due to climbing and he won’t stay in bed and screams at the door – not just fussing but totally ramped up five alarm cries. (FYI Ferber did not work for this child. We never made it past a few minutes between checks because he would cry to gag/puke levels and just never settled on his own. Also I’m a total softie.)

I need strategies for helping him fall asleep without nursing. I want to be consistent so he knows what to expect. My husband has stepped in a few times at bedtime and he will eventually be rocked to sleep but only after 2+ hours of crying, screaming for mama and trying to push daddy out of his room saying no no no. It’s traumatic for everyone. Do I go cold turkey and let dad take over at bedtime? Do I set a 5 minute nursing limit and hope over time he learns to accept it? Right now we nurse in his bed. Should I re-introduce the rocking chair if that will help him relax? Is it bad to take him downstairs to calm him down with some books and quiet toys before trying to put him down again?

When he wakes in the middle of the night (3 times a week?), sometimes he falls asleep on his own and if not my husband can usually get him back to sleep by just sitting with him in bed for a few minutes.

I’m hoping weaning him will improve his sleep overall. A really good night of sleep for him is 9 hours (8pm-5am or 6am if I’m lucky) and then a 2 to 3 hour nap at noon.

I am so tired and apparently so are my boobs.

My advice is to start backwards: Wean him off the non-sleeping session first. Typically (AHAHAHAAAA) the morning feeding is the “easiest” to eliminate, since you can get him up and out of bed and quickly distracted with breakfast, toys, whatever. It’s tough to say goodbye to the morning cuddles (not to mention the extra time dozing/staring into space), but if you’re serious about losing the nursing-as-comfort-slash-sleep-crutch, this is the session to start with. Starting with the bedtime session is TOUGH, as you’ve seen, and 2+ hours of crying and screaming every night is definitely NOT the conclusion we want to an otherwise happy, successful breastfeeding relationship.

I know, I know. It’s worse for your nipples at night. Although maybe if you haven’t started the day as a human pacifier for 45 minutes, the sensitivity won’t be as severe? If you can’t skip the morning session cold turkey, absolutely unlatch him as soon as it’s clear he no longer drinking. “Milk is all gone, time for breakfast/playtime/Elmo!” If he cries, treat it the way you’d treat any toddler tantrum: Ignore and continue to do whatever you need to do to get the day started. Once he stops crying or lets you distract him with food or getting dressed, heap tons of praise and positive attention on him.

Once you’ve successfully eliminated the morning session, work on the naptime one. You can tell him that “snuggles” are not for daytime anymore, and but “cuddles” are okay….cuddles meaning your shirt stays on, he gets a lovey and maybe a location swap to a rocking chair for a set amount of time before he needs to lie down for a nap. This absolutely might bork up his nap, yes. His “nap” might become more of a “quiet time in your room” thing for awhile. Breaking sleep crutches is NOT FUN (which is why I spend an inordinate amount of time trying to help people from letting them develop in the first place), but that’s another reason to work backwards from the bedtime session. It’s one thing to deal with a tantrum in the morning or a missed nap; it’s another to screw up the Main Event of bedtime/sleeping through the night before you absolutely have to.

Do whatever you can during the day to find other comfort items/actions to replace the boob-in-mouth. Loveys, a fun little tent/fort he can curl up in with books and a blanket, etc. And yes, when you ARE ready to eliminate the bedtime feeding, enlist your husband and some strict time limits once he stops swallowing. I’m usually firmly in the “don’t offer/don’t refuse” camp of weaning, but like Ferber, I’m sensing that might not work with your kid, especially since you’re on an (understandably!) tight timeline to eliminate physical misery.

Which: Speaking of that. Have you tried reintroducing any of the nipple comforting/soothing products from the early days of breastfeeding? Smearing some lanolin on before he nurses, or wearing a nipple shield? Sticking some Soothie gel pads in your bra, in the hours leading up to bedtime?  It doesn’t sound like you’re dealing with cracking or physical damage or anything — it’s most likely a hormonal response to having very little milk left and your production is like, “nope, we’re out” no matter how long he’s stimulating/sucking.

(THAT SAID: I wouldn’t rule out something like thrush, by the way. Probably unlikely but what you’re describing DOES sound a little similar — kind of an internal burning that absolutely triggers a toe-curling rage-stroke at the thought of having to latch again. Check his mouth for white spots, and get some Gentian Violet from a Whole Foods/health store/Amazon if you think it’s a possibility.)

I actually feel like you should try a nipple shield (or goopy greasy lanolin) ANYWAY just to make nursing feel “different” to him. See if either option maybe lessens his interest in hanging around there long after the milk is gone. He might protest but at least then you’re not outright refusing him, and maybe…just maybe…he’ll let you institute a strict five-minute time limit with a little less sturm und drang, or decide to skip it entirely.