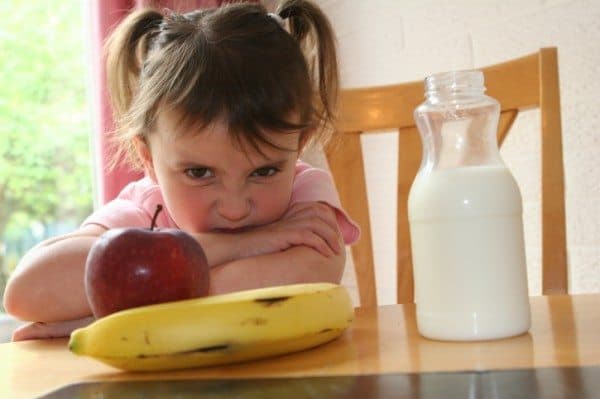 Love your blog. Love your advice column. You know, all that jazz. For real.

I hope this an easy question for you. What do you think about these fruit pouches that are so popular these days?

I have a 13-month-old who won’t eat fruit. She did eat 1/2 slice of apple the other day. That was a huge win. She loves cooked vegetables and eats lots of them, but she spits out fruit. She even sorts out the blueberries in her yogurt and spits them out. Anyway, she does love fruit pouches. But I worry that I’m taking a step back in self-feeding, or catering to her wants instead of getting her to eat real fruit (I continue to offer real fruit and strike out every time.) Or I don’t know, a million other potential bad things.

I got a sili squeeze and have made some of my own stuff for that. But sending a ready-made pouch to daycare is so much easier and faster. I know you are pretty well-versed in baby food so I am seeking your thoughts on the pouches. Thanks!

Some Kids Love Fruit. Some Don’t.

So I have a child who will not eat fruit either. Well, he’ll eat bananas and applesauce (though he’s not super jazzed about the latter), but that’s it. No apples, pears, peaches, berries of any kind, nothing. He’s been this way since we moved past stage one baby food.

And he’s SIX AND A HALF YEARS OLD.

I’m not telling you this to scare you or lead up to some “DO THIS OR ALL IS LOST” advice, because believe me, I have tried everything. You know I take my children’s diets super-seriously and am all about the proper foods at the proper stages and family meals and not short-order cooking for picky eaters and alllllllllll that stuff.

My kid doesn’t like fruit. (Or more accurately, the texture of fruit.) Yours doesn’t either, at least not right now.

I’ve pumped fruit into Noah a million different creative ways, none of which were ever as easy as handing over a pureed fruit pouch. Because he still refuses to even TRY those. (One time, after successfully adding applesauce to his limited repertoire, I made a grievous mistake and offered him pear sauce instead. To this day he makes me show him the jar so he can verify that it is, in fact, plain old applesauce before he’ll taste it.) Noah always required homemade smoothies or juices (UGH). And that’s also how I had to also get vegetables into him, for many years, so at least you’ve got that going for you! I’d much prefer to have a kid who eats vegetables but no fruit than the other way around, you know? Fruits are great for Vitamin C and a few others, but they’re also a big source of sugar. In the past year Noah has made zero progress on the fruit front, but decided that he really enjoys cooked carrots and fresh raw peas. And oh, I am thrilled. And it only took six years and approximately 14,000 previous rejections.

Ezra loves fruit. All fruit. Including those shiny, handy fruit pouches. He’ll suck down a four-pack in 15 minutes if I let him (which I do not). We do occasionally buy them for him as treats or for trips/outings/etc., but not regularly. Mostly because 1) they’re expensive (especially the organic brands) and 2) HE EATS REAL FRUIT.

You’re continuing to offer her fresh fruit. Awesome. You’re also giving her fruit in a toddler-friendly, convenient format. That’s just fine too. I wouldn’t worry too much about regressing on self feeding — is she sucking from the pouches herself, per their design? It’s really not much different than a juice or milk box, if you think about it. If she isn’t doing that yet and wants them spooned to her, that’s not really a big deal in my book either. Self-feeding with hands and self-feeding with a spoon are two very different skills, and I’ve always continued to help my otherwise independent 12+ month eaters with spoon foods like yogurt, soup, ice cream, etc.

As for fears that you’re catering to her wants…oh, we ALL cater to our kids’ food whims in one way or another. ALL OF US. We’ve all looked at something boxed or bagged and thought, “Oh, that’s perfect to keep them quiet/happy/fed/bribed.” And then bought it because yeah, it was easier. If you were local I’d invite you to peek into my pantry and freezer and see my seekrit stash of individually-wrapped granola bars, toaster pastries, boxed mac-n-cheese, canned ravioli, frozen pizzas and fish sticks and chicken nuggets. I make excellent, super-nutritious homemade versions of ALL OF THOSE THINGS. And I believe in serving them the same meals my husband and I eat, which usually involves NONE OF THOSE THINGS. And yet? We have them. Sometimes I make them. Jason is working late and the kids are hungry and I’m tired and we’re out of some necessary ingredient for a homemade meal and fine. Lemme heat something up. Dinner’s in 10 minutes, kids.

And hey, at least she’s not clamoring for neon green Gogurt and Lunchables, right? SHE’LL BE FINE. Families of fruit haters unite!