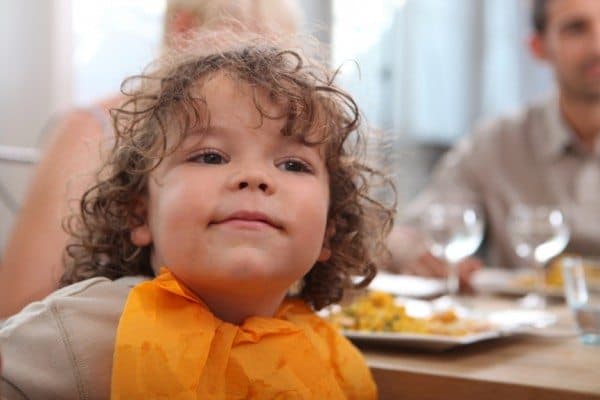 Hi Amy!! Have been following you forever and love your Smackdown advice. Please be merciful with my situation:

When I was home on maternity leave last winter with a colicky newborn I got into a bad habit with my toddler: *whispers* I started giving her most of her meals in front of the TV *hangs head in shame.*

At the time it didn’t seem like that big of a deal because it was the polar vortex winter of doom and I spent a lot of time pacing with and nursing a screaming infant. But now the screaming infant is a pleasant 10-month-old who eats nicely in a high chair and my toddler (now just turned three) just can NOT sit still and eat at the table.

I work part-time and she attends a home daycare while I am at work and is able to sit and eat properly there, even trying new foods, etc. Daycare lady reports no problems. But at home she will not sit in her seat, runs around the kitchen, and is generally disagreeable. Usually she asks to be excused and bring her plate to the couch to watch something. By that time I’m usually frazzled enough to be all: fine! She kind of zones out in front of the TV and will peacefully eat whatever’s on her plate. For what it’s worth, she’s a picky eater and kind of small/thin for her height but nothing outside the realm of normal.

I knowww what needs to be done, I just need advice and support about the terrible few weeks (months?) it will take to get there. I even bought Ellyn Satter’s book and I totally understand/agree with/want to emulate her advice. I am worried that I will repeat the same mistakes with my younger daughter and we will never have the lovely family dinners of my dreams. Is that unrealistic with two young kids anyways? My husband shares my concerns but works kind of late so it’s usually me and the girls for most meals. He will be totally on board with any plan of action.

So basically this isn’t a question about my toddler, it’s more about me. What are the actual words that need to come out of my mouth? I am prepared to have her skip some meals (dinnertime is the worst and she does much better at breakfast and lunch). Can she never eat in front of the TV again? Should I cut TV out all together? Help! I need some tough love.

PS I am a children’s librarian. Not even kidding. Oh, the irony!!

PPS This might sound defensive, but also wanted to note that we don’t watch crazy amounts of TV at our house — we do a good amount of reading, crafts, playing, running errands, normal stuff. TV is kind of now tied to dinner, which makes it … worse? I don’t know.

So before we get to the Most Righteous and Proper Smackdown-ing, let me be clear that I am only sympathizing with you here, not judging. We’ve ALL done stuff like this. We’ve ALL introduced (and then ignored) a less-than-ideal habit, usually out of exhaustion or desperation. And I’d bet that 99.9999999% of those bad habits we cave to are either food or sleep related.

I’m the biggest Satter Method tub thumper you’ll probably ever meet, but that doesn’t mean I’ve never made mistakes or fallen face-first into the very behaviors she warns about in the very first chapter.

When we first decided to go Full Satter, we were basically in your shoes. I had a picky, stubborn 3 and a half year old and a pleasant, agreeable baby. Our particular bad habit was short-order cooking for the 3 year old and caving to his super-limited list of acceptable food items — night after night of boxed macaroni and cheese or PB&Js, usually. I considered it a dietary success if I was able to hide some of the baby’s pureed vegetables in his pasta sauce or a smoothie.

And like you, I kneeeeeewwwwww. I knew this wasn’t ideal, or even really “okay.” He was living on salty cheesy carbs and little else. And he kept getting pickier and pickier, more likely to freak out at the sight of something unfamiliar on his plate, and I could already see the baby’s good eating habits starting to head down a similar path. Why was his brother getting THAT while he was expected to eat THIS?

I read Ellyn Satter’s book, read a few pertinent sections out loud to my husband, and we agreed to ditch the short order cooking and embrace the “division of responsibility” instead. (It is our job to put food in front of him. It is his job to eat it.) We went pretty much cold turkey. He got the same food we ate, presented in an accessible format and portion size. If my husband worked late and I did make a “kids’ meal” separate from ours, it was still comprised of “off-list” foods. (Challenging things like…chicken nuggets! Meatballs! Frozen peas! I was the MEANEST!)

He refused to eat dinner for a few days, yes. Just straight up would not eat a bite.

Then we turned our attention back to our meal and his brother.

Note that nine times out of 10, he was already up from his seat and pitching a fit. We did not institute the “fine, don’t eat, but stay here at the table with us” rule until much later. Baby steps! Telling him to clear his own plate and reinforcing the idea that his meal was over once he left the table was a really effective place to start, and helped curb a lot of the control-based battle-of-wills temper tantrums. He felt like he “won,” but he really didn’t, because WAIT NOW I’M JUST HUNGRY. AND EVERYBODY IS IGNORING ME. CRAP. NOW WHAT.

So if your daughter gets up and wants to eat in front of the TV, tell her no, we eat at the table. If she gets up, her dinner is over. She can take her plate into the kitchen and then play quietly, but the TV. Stays. Off. Full stop. Maybe have some music playing quietly instead, and use that as a secondary excuse — we are all enjoying this music and we won’t be able to listen with the TV on. (And yes, I would insist on zero meals in front of the TV, at least for a very long time, or until you’re confident the “expectation” of eating there has been broken. I wouldn’t cut out TV completely, just reframe it as an activity completely separate from food, meals and snacks included.)

If she decides that no, she’s not sitting at the table, not eating, no no NO, take a deep breath and remind yourself that it ISN’T YOUR JOB TO MAKE HER EAT. No more caving, no more frazzled “FINE!” Let her make the choice to not eat. Do your damnedest to not give a crap about that choice. You did your job. She will not starve. There’s nothing to be frazzled over because you a freaking Zen Master of Calling Dinnertime Bluffs. If she continues to throw a tantrum over the TV, respond however you typically respond to tantrums (simply ignore, time out, go to her room, etc.). Consistency is key here, across the board.

My son caved by night four or five. He was really hungry and finally aware that we were not going to back down and give him something else. He ate an entire plate of fish sticks and carrots. Hardly a nutritional masterpiece but at the time it was HUGE.

Fast forward to now. I have three children who all sit (mostly) politely at the table and (mostly) eat the same family meal.  (Our 3 year old recently went through a big “I don’t like this I’m getting up I’m driving you crazy” phase — we got through it basically following the advice I just gave you, paying particularly close attention to the NOT GIVING A CRAP Zen Master mode and ignoring him completely once he bailed on the meal.)

Family meals are absolutely a realistic goal, and one that I really believe is worth fighting for. Dinnertime is pretty much the one time of the day when all five us can really be together, and focus on each other — rather than the TV or our phones or homework or housework or breaking up sibling squabbles. I genuinely look forward to dinnertime now, instead of dreading it because of the merciless whims of a picky or defiant child.

Last night I made salmon with a barley/fennel/brussels sprouts risotto. (Two of them had seconds on the salmon, one had thirds.) The night before was Thai chicken meatballs in a slightly spicy curry sauce and rice noodles. (My formerly most-picky eater asked for more noodles, but was completely fine with me dumping more curry sauce on them first.) This morning I made chicken tikka masala in my slow cooker. Tomorrow night I’ll probably make them a frozen pizza or something so my husband and I can have a later, romantic dinner together. And that’s cool, because they know the next night it’ll be back to dinner as usual.

So chin up! Stay strong! It’s not going to be fun at first, no, but oh my God, IT WORKS. AND IT’S SO WORTH IT.