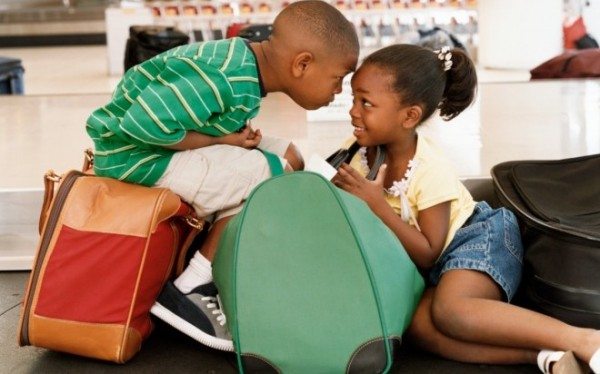 The Time TV Saved Us From An International Incident

Once upon a time, we packed up a 15-month-old and a four-year-old and flew to Jamaica. We survived taxis and three airports and transfers and dubious turkey club sandwiches. By the time we finally arrived in paradise, everybody was hanging on by a tired and very bored thread. Then we rounded a corner and faced the longest customs line known to man. Or, to us anyway. We don’t jetset much, these days. Or ever.

We were not alone in our particular circle of hell — directly ahead and behind us were several families with small children, who were all just as bleary-eyed and antsy and very much unimpressed with their parents’ offerings of baggies of cereal and luggage-crushed Goldfish crackers as ours were. No, they didn’t WANT to stand patiently. Or look at that same sad little book or toy car anymore. Or listen to your tired explanations about time zones or jet lag. They were promised s BEACH. And a POOL. Things that were FUN and did not involve STANDING STILL while you snapped at them for the millionth time to stay put, just stay next to us, and get your face off that filthy floor, oh my GOD.

It took our particular four-year-old all of four minutes to figure out how to unhook the ropes from the queue stanchions and to start designing his very own exit-optional maze out of them. A few feet ahead of us, I saw a father juuuuuust barely prevent a domino effect of knocked-over poles as his tired-to-the-point-hyper kid crashed into one.

I had the baby in a backpack carrier. Every bone and muscle in my body was protesting as I kicked our bags and carseat forward inch by inch and that’s when I noticed my husband — my wonderful, sainted husband — was completely engrossed in something on his phone screen. And I — also being wonderful and sainted — opened my mouth in preparation of LOSING MY EVERLOVING MIND in his general direction, like, a little HELP HERE, with the child-wrangling and entertaining?

Luckily I only managed to emit a few seconds of a high-pitched screech before he handed the phone to our son, whose entire face lit up in the warm glowing warming glow of…an episode of Nick Jr.’s Olivia, accessed directly from our TV at home through the power of…I don’t know. Witchcraft, possibly.

During the next 22 minutes, Noah stood there transfixed, obediently shuffling up a few steps whenever we prompted him, and kindly holding the screen out far enough for his newfound crowd of BFFs who had gathered around him. Like the Pied Piper — or zombies, maybe — every other child in the vicinity had somehow figured out that That Kid There Has Cartoons and inched their way over to see.

A couple other parents blearily asked us questions, like “What is that?” and “How’d you do that?” But most of them just said stuff like, “That’s smart.” We made it to the front of the customs line without incident, and were graciously welcomed into the country…and our hour’s drive to the resort. (Where there was also no TV, but that’s another story.)

Ever since I became a mother, I’ve heard the warning and chiding about “using TV as a babysitter” and relying too heavily on TV and electronic gadgets to keep children entertained. Yes, yes. Too much television is bad for kids. They should all play outside and get fresh air and never spend a single minute standing still via the power of the Video Stare. Blah blah. Sometimes TV does make a pretty damn good babysitter. And sometimes it’s even better than that. Sometimes it’s a parent’s very own personal international peacekeeper.