Twitter Facebook Pin It Email Article
Prev You Have a New Baby! Now How Do You Keep Your Sanity?! Next Dear Cal: Advice To My Teenage Daughter (Part 3) 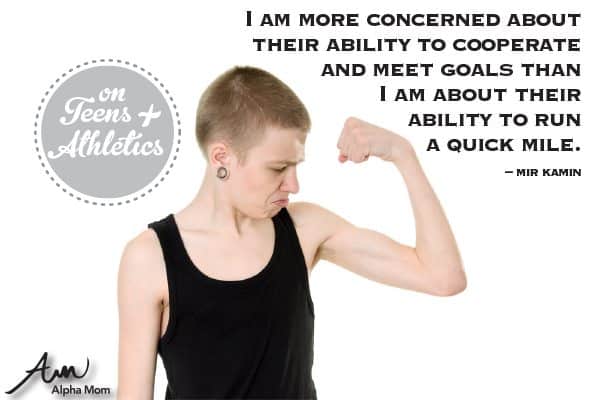 I was not a “sporty” kid. I wanted to be—I grew up in a time when a mandatory part of being “cool” was membership on a sports team—but… I’m uncoordinated and slow. Plus, I had really bad asthma, and just doing the Presidential Physical Fitness Test in gym left me sucking on my inhaler like a John Hughes movie outcast. So I played some Little League when I was still in elementary school (and here we understand “played some Little League” to mean “stood in right field picking flowers for a while and then went out for ice cream after”) and then happily gave up on sports.

Surely my children would be different. Why, their father was involved in a variety of sports, growing up, and team sports bring all sorts of benefits to the table for growing children. There’s the physical workout, sure, but also learning to cooperate, being part of something where the whole is more important than the parts, working with a coach… I would help them find the activities where they could shine. I wasn’t looking to raise Olympians, you understand, but merely to help them cultivate a healthy lifestyle with a side of physical and personal growth that they would enjoy.

We started with soccer; no, to be more accurate, we started with Amoeba Ball™. Amoeba Ball™ is what happens when you try to teach very little kids to play soccer—they just coagulate as a giant mass and move around the field together. My daughter played for two years before asking if she “had to” for another season, so I said of course not, let’s find you something else. She dabbled in dance and both kids took swimming lessons. I put my son into soccer and my daughter started Tae Kwon Do and declared it the most fun she’d ever had. He carried on the family Amoeba Ball™ tradition while she worked her way through belts and chanted “Sir yes sir!”

Then we moved. I don’t think the move was the problem, just to be clear, but the rhythm we’d hit prior to the move somehow didn’t work in our new environment. The new Tae Kwon Do studio was great, but my daughter’s interest waned. The closer she got to her black belt, the more sparring was part of her training, and she’d never liked the “fighting parts.” She began asking to quit. And soccer wasn’t working out so well for my son, either; we had a few rough years before his official autism spectrum diagnosis, and (go figure!) during that time, he was prone to epic meltdowns any time he experienced unexpected physical sensations… like, say, a soccer ball hitting him. Yeah.

My son quit soccer. My daughter quit Tae Kwon Do. I delivered an impassioned lecture to the two of them about the importance of team sports (in which I probably sounded exactly like Charlie Brown’s teacher, to their ears), and we all agreed they would try swimming for a while. I signed them up at our local Y and both of them took to it like fish. The problem was, my boy fish mostly swam around in little circles, ignoring the coach, and my girl fish did as she was told but rode home in tears after every practice, convinced she was terrible at everything and the world was a horrendous place. (I quickly learned that low blood sugar can result in Extreme Crankybutt Syndrome, and learned to stuff some food into her the minute she got out of the water, which helped a little.) They stuck out the season at my insistence, then quit.

I was left with two tweens who seemed to be following in their mother’s not-so-physically-fit footsteps, plus I agonized over all the life skills team sports are supposed to help impart that they might be missing. As the kids moved into the teen years, I realized two important things, and know they’re still getting what they need.

Exercise is important, and it comes in many forms

My son is a constantly-in-motion kind of kid by nature. We learned through years of occupational therapy that he will always do better on days when he’s had the opportunity to exercise, but we’ve also learned that his coordination (both social and physical) can make typical team sports difficult and frustrating for him. So for him, a simple “go outside and burn off some energy” is likely to get him moving around. He loves to swim (just not on a team) and bike, and on rainy days he’s still got his exercise ball (“go bounce”) and pull-up bar (“go do some chin-ups”) inside to allow for some much-needed movement. He’s also done a few seasons of Challenge League baseball (a team for kids with special needs), though he feels he’s outgrown it, now.

My daughter, on the other hand, takes after her couch-potato mama—given a choice, she’ll sit down with a book, every time. So it took some experimenting, but it turns out that she’s grown to enjoy taking the dog on long walks, because she can turn up her iPod and zone out while she’s doing it. Yoga helps her manage her anxiety. She’ll come out and swim with us, too, and then, of course, she has marching band, which is a killer workout. And that brings us to the second thing…

Teams are important, and they come in many forms, too

A good team experience is one where everyone works towards a common objective, coordination (and sometimes compromise) is necessary, and individual betterment is encouraged, but individual glory is less important than team effort. You can get all of that from sports, but I’d argue you can get that from any team activity. And as my kids turned down sport after sport, I realized that I was more concerned about their ability to cooperate and meet goals than I was about their ability to run a quick mile. Enter marching band, for my daughter (with the added benefit of exercise, too), but also enter… academic team, and reading bowl, and FFA. There are endless opportunities at her high school for a plethora of life lessons via extracurriculars. As for my son, well, he’d just as soon hang out on his own most of the time, but we finally found his flavor of team activity, too—Minecraft can be played both alone and in cooperation with others (if you have Minecraft fans on the spectrum, be sure to check out AutCraft), and in the last year he’s really started to come into his own as a Dungeon Master. Yeah, Dungeons & Dragons. Nerdy, we know, but also rife with opportunities to practice those cooperation skills that can be hard-won for kids like him.

Just because a kid isn’t cut out for team sports doesn’t mean they can’t reap both the physical and socio-emotional benefits of exercise and teamwork. You may just have to look a little harder for the right ways to do it. Viva la difference! (Or, in our family’s case, viva la nerdery. We’re okay with it.)