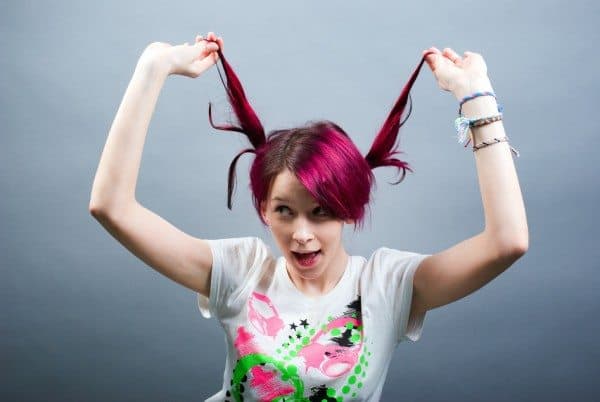 My Rules vs. My Teens’ Style

I have a vivid memory from when I was about 14. It was the 80s, and a lot of the teen-approved styling was… unfortunate… and one day I got ready for school in a plaid wool skirt, thermal underwear bottoms (instead of tights), and an inside-out oversized sweatshirt. My mother took one look at me and said that I looked homeless. I was insulted, of course. I looked awesome. And then she said those dreaded words, “You are not leaving the house dressed like that. What will people think?”

I suspected they would think that at 14 years of age, my mommy was no longer picking out my clothes. It was infuriating to me that my mother was implying that the way I looked was somehow a reflection on her. I wasn’t a toddler.

Whenever I think one of my kids is leaving the house looking… not quite the way I might’ve hoped, I try to remind myself that they’re teens now, and it’s good and right for them to make their own choices. Hopefully no one thinks I’m orchestrating their style at this point in their lives, and if they do, oh well. I try to pick my battles in this arena very carefully, lest my opinions squelch burgeoning selfhood. I don’t always succeed—there is the occasional “Really?” that emerges in my outside-the-head voice—but for the most part I think we’re in a good place.

Contrary to what many of us would like to believe, even otherwise capable teenagers are not always blessed with the ability to recognize when they’ve begun to reek of eau de hormones. Some parents may find it uncomfortable to talk about this stuff or worry that it will embarrass the kid. You know what is embarrassing for a kid? Having other kids think they smell. The advantage of autism (at least for us) in this arena is that we were all well-accustomed to “personal care skills building” long before the first zit arrived on the scene. Just as you once taught your little ones how to wash themselves in the tub, how to navigate taking a shower, I see teen hygiene is really more of a health issue than an appearance issue. As my kids hit middle school, we talked about the changes on the horizon, wearing deodorant, changes in your skin, etc. My experience has been that there’s a year (or two) wherein some gentle urging towards more frequent bathing (and its pals: deodorant, dandruff shampoo, and Stridex) may be necessary.

That said, when necessary, I don’t have a problem with saying, “You need to go take a shower. Right now.” If I can smell you from here, I’m going to make that choice for you. Sorry (I’m not sorry).

My daughter wanted to start shaving when she was in middle school. We started her with an electric razor and after a while I taught her how to use a real blade. I suspect this felt like a no-brainer because I, too, shave my legs and armpits and started around that age. Had she asked to shave much younger (I know that’s happening more and more) I’m not sure how I would’ve reacted. Had she opted not to shave at all, that would’ve been okay with me, too. [I think I sound very enlightened and Zen right there, so let me hasten to add I am having nightmares about teaching my son to shave, and he hasn’t even started yet. I am not always logical.]

I have a hard time getting worked up about hair choices, personally. The marvelous thing about hair is that it grows back, so it’s not as though a bad haircut is a lifetime sentence. That said, I do require a waiting period for any drastic changes. If you decide to cut all of your hair off, we’re not going to do that the second you decide it’s a good idea. Take a few days to be sure. And I’m not going to okay something that’s super-damaging to my kids’ hair—no bleaching it to white, for example—unless they’re prepared to shave their heads, after. (Yep, that’s the rule. My daughter decided she was not interested in that, after all.)

My son had long hair for years and years, something that was born of an aversion to haircuts and eventually became his “thing” for a while. People mistook him for a girl all the time and it never bothered him. One day he decided he was ready for a haircut and that was that. Now he prefers to keep it short, and I don’t think he cares about how it looks. My daughter has cut her hair quite short, twice, though she swears now she’ll never do it again (we’ll see). There have been a couple of forays into having bangs, when it’s been long. For a while she had one of those angled cuts (longer in the front) and for a short time when it first became popular, she had feathers in her hair. Lately she’s experimenting some with color; right now she’s rocking some ombre, but she says she’s thinking about doing purple tips again.

The house rules about hair are that it needs to be clean and combed and not in your face. Other than that? Dude, it’s your hair. I don’t care. Have fun with it now before you’re a grownup with the world putting expectations on you.

Again, my son doesn’t have much in the way of preferences about appearances. He’s happy with jeans and t-shirts that sport nerd jokes. My daughter definitely has her own ideas about style, and as I mentioned in my piece about thrifting, the trick becomes deciding what’s a rule and what’s a preference. The rules are things like not having your underwear exposed or wearing a shirt with profanity on it (neither of which my kids would want to do, anyway). Preferences are trickier, though. For example: This summer it was kind of a popular thing for girls to cut up t-shirts and tie them back together again in interesting ways to make sort of fancy tank or crop tops. (Maybe this has been a thing for longer than that, I have no idea.) I asked my daughter to check with me before cutting up any of her shirts, and she assured me she’d wear a fitted tank top under the new/old shirt which had a lot of (planned) holes, but beyond that, I just kind of shrugged. I wouldn’t have spent money on a shirt like that for her, but she took an old shirt she didn’t wear much anymore and made it over into something she liked better.

Remember when your kids were little and there was a point when your toddler wanted to wear shorts in the middle of winter or snow boots in August, and you had to weather (pun intended) a tantrum to get them into appropriate clothing? I now live in Georgia, with a teenager who lives in combat boots. She wears them year-round. I have heatstroke just looking at her in those things in the summer, but she’s not a toddler anymore. Her choice.

On the one hand, I think all of this is very easy for me to say because neither of my children tend to be all that “out there” with their style choices. On the other hand, maybe they’re not making outlandish choices because it wouldn’t be a point of rebellion…? Allow me my fantasy, that in some small way, I actually influenced my offspring.