Twitter Facebook Pin It Email Article
Prev Is pretend-shooting acceptable play for kids? Next When is it okay to leave your child alone at home?
Health & Safety

So about this time of year, every year, I start to look like a leper. Why? Because apparently I was put on this earth to be a mosquito buffet. I’m not kidding — every time I go outside, I put on bug spray (I’m on my third different kind so far), and yet I still get eaten alive. Right now I have 22 bites below my knees that I can count. (It’s been like this my whole life — I remember going to sleepaway camp as a kid and coming home with more than 100 bites.)

What makes it worse is that for some reason, mosquito bites turn into almost small hives on me. They swell up larger than on most people, and usually scab over within a day or two (whether or not I scratch them). Tasty, right?

I refuse to give up time outside — I like running, walking my dog twice a day, and I walk to and from work. I usually wear capris or knee-length skirts because, you know, it’s 90 degrees in DC. I’m not rolling around in grass, and I’m never just lounging around outside. So, two questions for you (and any wise readers):

1. What are your favorite mosquito-repellant techniques? Tell me your strongest bug repellant. Point me to your secret full-strength DEET supplier. I’m begging here.

2. Can I still wear skirts given my leper-like legs? Should I only try to wear long skirts and pants that cover up my bites? Is it worth trying to camouflage them with a foundation or something, or will that just look ridiculous?
Thanks for any help. In the meantime, I’ll be counting down the days until the first frost.

Oh, my, GOD, do I feel your pain. I, too, am apparently extra-tasty-delicious to mosquitoes, and I’m also more “allergic” to the bites than your average bear. (My world record welt was in high school, when I got bit right in the middle of my forearm during gym class, and I ended up with a red hive from WRIST TO ELBOW. I swear, I thought the school nurse was going to stab me in the heart with an EpiPen before I had the chance to explain that no, I just need some hydro-cortisone and Benadryl, really.)

(My child? By the way? COMPLETELY IMMUNE. He rarely, if ever, gets bitten in the first place, and when he does the bites fade from tiny red marks to nothing within a few hours and don’t appear to itch at all.)

Repelling mosquitoes requires a layered technique, I’ve found. You need to think about EVERYTHING you put on your body, from body soap on up, instead of just spraying some DEET on before you head out. Everything from lotions to perfumes can actually attract bugs…or help repel them, if you’re smart.

For the shower, look for natural soaps with peppermint, lemon or eucalyptus oil. (Handmade soaps are the best, if you can find them.) Cedarwood soaps are also a natural repellent, although I find the smell a bit manly and much. And of course, there’s citronella soap, which can usually be found at outdoorsy-type sporting goods stores. Regular use of these sorts of soaps will build up your defenses from the ground up, so to speak.

If you can’t find a nice-smelling soap that you like, or your skin is too dry for bar soap, find yourself an Avon Lady and order some body products from the Skin-So-Soft line. Remember this stuff? It started out as just another nice-smelling body oil spray and bath, until somebody discovered that actually, it’s actually good for everything under the sun, including repelling mosquitoes. Avon has since spun the line out to include a specific line of Bug Guard products (mostly sunscreens and bug sprays), but you can still get the original bath oils, washes and lotions. Swap out everything scented that you currently use with this stuff. No scented lotions. No non-Bug-Guard sunblock. Put the perfume in storage until fall. Layer yourself up.
AND NOW you’re ready for actual bug spray. Here’s my thing, though — I don’t want to smell like bug spray. Ever. I hate the roach-trap smell of it, and DEET creeps me out and I generally count the hours until I can jump in the shower and scrub the toxic crap off my skin. And I refuse to use it on my kid, weird-mosquito-immunity aside. So again, I try to stick to natural and botanical products — WITHIN REASON, of course, because I’m highly allergic to those bites, and I’m guessing my son isn’t also immune to West Nile. 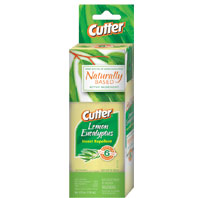 Like the soaps I mentioned, lemon and eucalyptus are your best friends here. Repel makes one, as does Cutter (this is what I currently use). These insect sprays, while generally nice-smelling, are a little oilier than what you may be used to, but I find they work. Just last night we barbecued and ate dinner outside (surrounded by citronella candles, of course) and I did not get a single bite. My mother-in-law, who is the most crunchy, toxicity-paranoid person I know, refused to use the Cutter spray. She didn’t trust the Cutter’s vague listing of “Other Ingredients” beyond the natural oils and claimed mosquitoes never bothered her. She was bitten several times.

Welcome to August in DC!

Another important thing to remember about ANY bug spray is that you need to reapply. Even the best stuff wears off after a few hours. (I think most of the packages claim six hours or so of protection but I’d say it’s more like four, especially if you’re sweating.) Reapply before you walk home from work, or before you walk the dog. Remember that mosquitoes prefer shade to sun, and swarm around puddles or other areas with standing water. Dawn and dusk are the most mosquito-heavy times of day (conveniently the same times many of us are walking our dogs or jogging). Wear light-colored, tightly-woven fabrics to further discourage the bugs from biting you.

As for treating/camouflaging existing bites…firstly, NO. Do not put makeup on them. I’ve seen women do this. It does not work. “But when I do it…” No. It does not work. We can all tell what you’re trying to do. I’ve found that my bites get less noticeable if I keep up with the self-tanning moisturizer (and yes, I know I’ve just contradicted myself there, since those lotions are scented but…you know, VANITY), but beyond that, I don’t cover them up.

Of course, not scratching and causing scabs is HUGE and a MUST and you need to work on that. Self-control! You can do it.

Carry around an and try to apply it as soon as possible after you get bit. Ahh, that’s the stuff. Apply a hydro-cortisone cream to all bites, old and new, every day to stop those annoying flare-ups you get two days later, right when you forget about the bite and scratch and…oh, damn, bleeding. If you tend to scab over, alternate the hydro-cortisone with a first-aid cream like Neosporin to aid the healing. The scabbing could be because you’re scratching at night, or your clothing or sheets are rubbing the welts, so consider a layer of Aveeno’s Anti-Itch lotion before bed. It has a little calamine lotion and might calm things down a bit more.