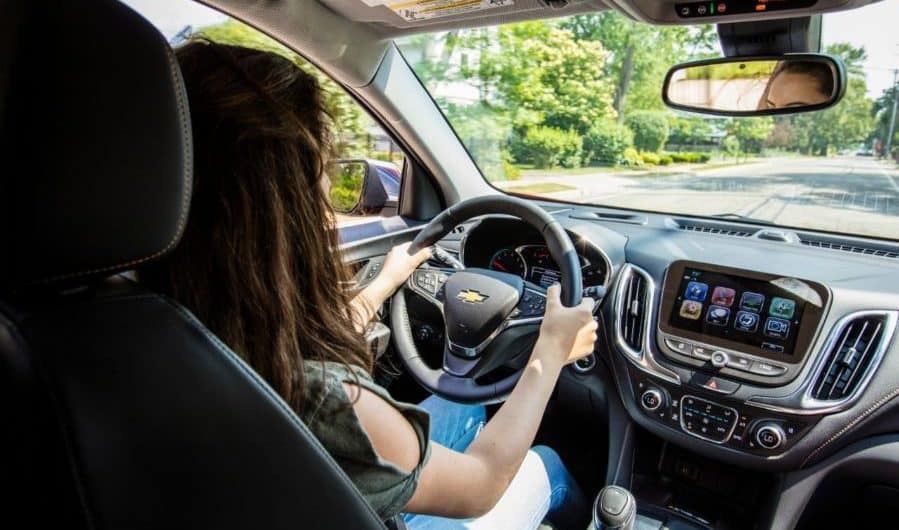 My first car was a Dodge Aspen, a giant plain-Jane sedan that could traverse snow and ice in the tundra of northern Indiana in the winter. When it arrived in my parents’ driveway, it had a simple AM radio and that’s it; to my teenage sensibilities, that was not going to cut it. I had 80s tunes to crank up.

The new stereo was my joy and my safety nemesis. I, like most teenagers, didn’t have the kind of driving training or experience yet that would keep me from attempting to change the radio station, or plug in a new cassette tape, or fiddling with my Bonne Bell lip balm while I was driving. No joke, a friend of mine hit a tree when trying to paint her toenails while driving.

As parents, we can’t make our kids’ decisions all good ones. But we can introduce technology that helps us keep an eye on our kids while they’re getting more experience on the road, and we’re talking about more than iPhone tracking. There are various parenting philosophies on safety monitoring and using gadgetry, so while these technologies may not be one-size-fits-all, they are worth checking out. Especially if you think your teen might be more distracted than others. Car manufacturers have their eyes on teenage driving, too, because they want to help make the roads safer for everyone.

As far back as 2006, Lexus and Volvo were offering a pre-collision system that detected objects in front of the car via a camera and radar combination to reduce the number of crashes on the road. Since then, most major manufacturers include as standard some kind of crash warning system on their vehicles. If a vehicle equipped with a pre-collision system senses sudden, hard braking, a signal will flash on the dash and a noise will alert the driver. In case the brakes are still not activated in time, the Emergency Braking system initiates. Even if the car is too close to avoid a collision with emergency braking, the system will reduce speed, which ultimately lessens overall damage; that can mean the difference between an injury and a fatality.

As an automotive journalist, I often have the opportunity to test drive these technologies; in this case, I have seen the Chevrolet and Nissan technology in action, and the Ford offering is on my must-see list next.

New car technology to keep your teen safer at the wheel. 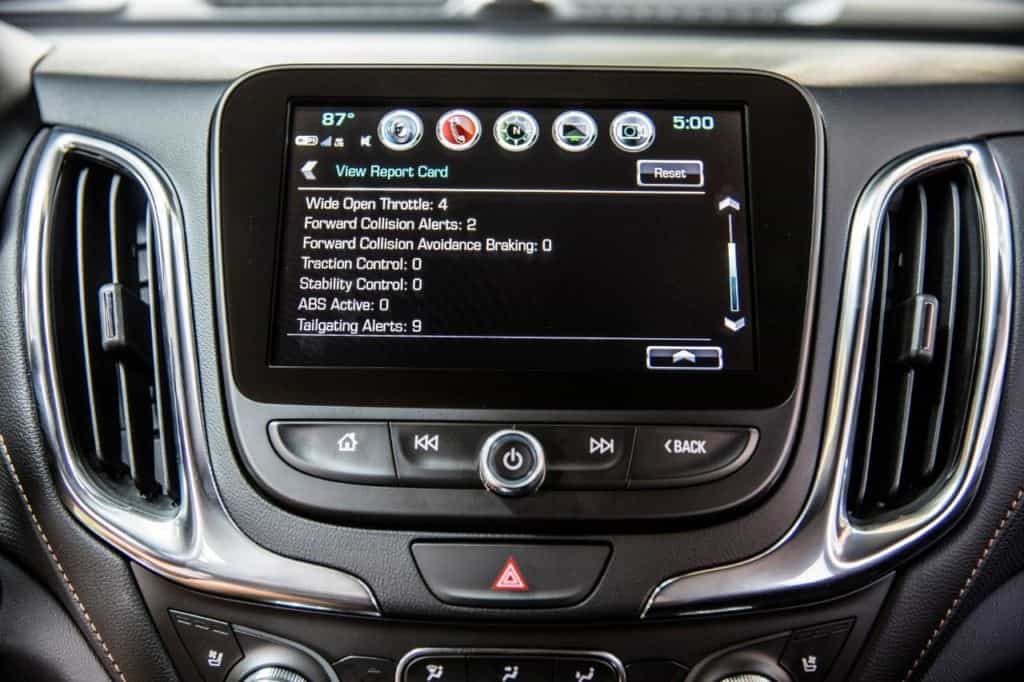 Chevrolet’s new built-in safety system called Teen Driver is like the Elf on the Shelf for young drivers in a car; except that it reports back to you and not Santa. With Teen Driver, parents can set speed alerts, volume limits for the radio, and receive an in-vehicle report card on the dashboard display. If my father had checked my speed and braking habits on a digital report, I may have been relieved of my keys, and quickly. On vehicles equipped with Teen Driver, the audio is disabled until all seatbelts are fastened, which would have given me more incentive to buckle mine back then.

The manufacturer also offers advanced safety technologies like Side Blind Zone Alert, Forward Collision Alert and Forward Automatic Braking. This feature debuted with the 2016 Malibu, and is now standard on all family-style vehicles from the manufacturer. OnStar Corporation is a subsidiary of General Motors (Chevrolet is in the GM family) that provides subscription-based communications, in-vehicle security, emergency services, hands-free calling, turn-by-turn navigation, and remote diagnostics systems, all of which could be useful tools for parents’ peace of mind. OnStar Basic, which includes remote door lock/unlock, remote vehicle start, and remote horn and lights, is free for five years with a new vehicle. For the safety features like automatic crash response and crisis assist, drivers may choose a monthly subscription for $19.99 or annual for $199.90.

Ford offers a motor vehicle security system that gives parents control of a car with a configurable key. If you have ever had a valet key that allows limited access to the car’s features, you’ll understand that the concept is similar. Ford’s MyKey was designed for parents who are sharing a car with their teen and want to encourage safer driving. Whomever sets the parameters for the key can set a vehicle speed limit, which the driver cannot override; the audio system can be set to a maximum volume of 45%; and the “do not disturb” feature may be enabled, if the vehicle is equipped with that function. The Do Not Disturb feature blocks incoming calls and holds text messages on a phone equipped with Ford SYNC. (Come to think of it, there are plenty of adults on the road who would benefit from that application, as well.)

When the “always on” is enabled, the MyKey driver will be unable to switch the set functions off. MyKey also prevents teenage drivers from turning off other safety systems such as blind-spot monitoring, forward collision warning, and lane keeping assistance on cars that have those features. The system kicks into gear depending on which key fob is used to start the ignition, and parents can program one key as a master and the other for their teen(s). This feature became available in 2010 standard on all models and does not add any additional cost to the car. 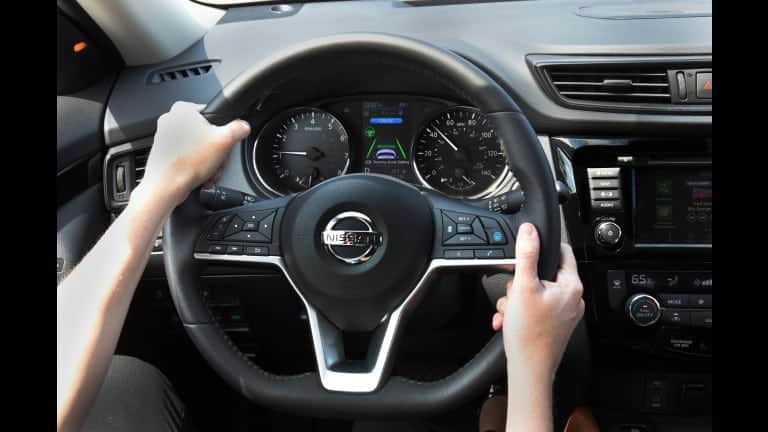 With distractions, late curfews, and late-night bedtimes, teens may not realize how tired they are on the road. Nissan released ProPilot Assist in 2017, which was designed to be a stress reducer and fatigue reliever, and could help teen drivers prevent accidents. Nissan calls ProPilot Assist “hands-on-wheel” technology”: imagine, for instance, your teen drives home from a summer job late at night. When they experience fatigue, their eyes may begin to close and their hands may drift from the wheel, causing the car to veer from the center line. With ProPilot Assist, the car senses that the driver is not engaged appropriately and emits visual and then audible warning alerts. If, at that time, the driver still does not place his or her hands on the wheel, the brakes will gently tap to get their attention. As a last resort, if all of the alerts have been ignored, the brakes will engage, the vehicle will slow down within its lane, and the hazard lights will be turned on as the car comes to a complete stop. This feature is available on the 2018 Nissan Rogue (one of Nissan’s most popular models) and the 2018 Nissan Leaf. Intelligent Driver Alertness is a standard smart function on Nissan’s 2018 Maxima that notes typical driving patterns and alerts the driver if it senses unusual activity at the wheel. The symbol they chose is an illuminated coffee cup with a message that reminds the driver to take a break to avoid driving while fatigued. This technology can help reduce the number of accidents caused under fatigue and stress.

Have you heard of any other safety features we should know about? Let us know in the comments!