Twitter Facebook Pin It Email Article
Prev Tell Me How To Feel About: THE LEASH Next Harassment vs. Helicoptering 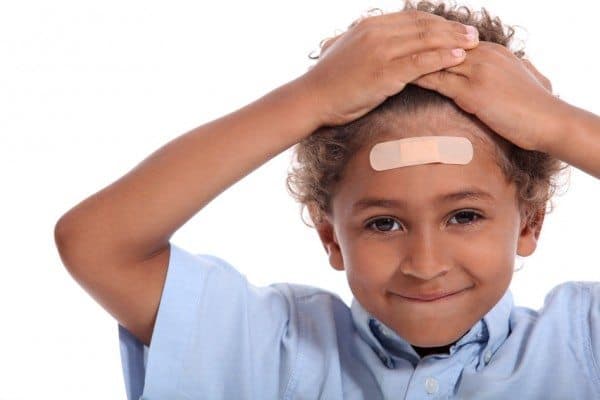 It’s a Miracle Any Of Them Live To Adulthood

Everyone has at least one story (and usually more than one) about The Time You Thought Your Kid Was Being A Brat And It Turned Out You Were Just A Jerk. If you have a child, you’ve missed an illness or injury at some point… and often it involved being annoyed with said child, too. These stories get passed around in commiseration because we’ve all been there and the guilt can be crushing. Knowing you’re not the only one makes it more bearable.

Here’s my favorite: my daughter, my darling firstborn, was… not a fan of sleeping. By four months—when most other babies were settling into a sleep routine—she could still go from unconscious to screaming in .0001 second if she realized you’d just placed her in the crib. She was not a self-soother, to put it mildly. By the time she was six months, we were desperate. I read Ferber and we began the process of “Ferberization” (returning to the room to assure her that she was okay, patting her but not picking her up, etc.) in a last-ditch effort to get her sleeping on her own. It seemed to be working, too, but then one night she just would not stop crying and screaming. My husband wanted to go pick her up, but I pointed out that Ferber said this was to be expected, and she was fine. Still, it was hard to listen to. Finally my husband couldn’t stand it anymore and went and picked her up… and she threw up all over him. And then about 100 more times that night.

There’s a certain mixed emotion when something like that happens with a pre-verbal child; on the one hand, it’s not like she could tell us she was sick (and she often cried/screamed just because she didn’t want to go to sleep). On the other hand, our job is to tend to our tiny, helpless children as best we can. So there’s a bit of “How could we have known?” mixed with “I’m supposed to know.”

But this is a phenomenon of parenting little kids, right? Well… no.

Both of my children have sensory issues which render their ability to identify and gauge pain a bit wonky. My son often doesn’t register pain at all, while my daughter is at the other extreme, responding to a tiny scratch as if her limb was just amputated with a rusty spoon. You would think that knowing this would render me better able to meet their needs, but you would be wrong. Because what am I supposed to do, constantly assume he’s sick but doesn’t know it and that she’s not overreacting this time and I should pay attention? (Yes, probably I should do that. Shhhh.)

You know where I’m going with this, right? Over a month ago, my daughter was fooling around with some friends at marching band practice. Okay, if you must know, they were pretending to be airplanes and zooming around the band room, picking up and dropping the plastic boxes they keep their shakos (hats) in. (Yes, she’s almost 18. No, I can’t explain.) Later that night, she mentioned that on one “zoom” she’d picked up a shako box and her wrist had twisted a little further than was comfortable, and she felt a little pop, but at the time she didn’t think anything of it… but now it kind of hurt. Okay. Ice! Advil! Pointless lecture about why being an airplane in the band room might be a bad idea if you’re accident-prone! And then I forgot about it. A week later, she’d been wearing a borrowed a brace from a friend and complaining that it still hurt, so I took her to the pediatrician. The pediatrician said it was probably just “some sort of soft tissue strain” and to wear the brace and call back for an orthopedist referral in two weeks if it still hurt. Two weeks later, it still hurt, so I called and got the referral… for an appointment two more weeks out.

In the meantime, my daughter has been unable to play her flute at all. She’s been managing with her piccolo, sort of. She’s confided that she feels like her music teachers are starting to feel like she’s just kind of milking it and not trying, and I’ll admit that I wasn’t sure they were wrong. As she is now committed to a music program for next year in college, the inability to practice has been causing her more and more anxiety, and yes, I wondered if it was a vicious cycle of “I can’t practice… I don’t want to practice because I haven’t practiced…” taking place.

This week we saw the orthopedist, finally. After a full set of X-rays and a thorough exam which left my kid in tears (guuuuuuuuilt) the doctor explained that tendon injuries can be quite severe, and failure to rest them can make them worse. “We need complete immobilization here for at least four weeks,” she said. “What color cast do you want?”

Not only had I spent five weeks wondering if my kid was exaggerating, now she’s in a cast up to her elbow and cannot hold a pencil or play either of her instruments, so she’s mad and frustrated on top of being injured. Awesome.

I did the most logical thing I could think of: I took to Facebook to share what a terrible mom I am in having let this injury languish for so long. Lo and behold, my friends did not fail to rally ’round to share their own stories of missed injuries and illnesses, making me feel much better about my own ineptitude. A small sampling of the stories shared:

“Apparently being able to wiggle fingers is not a sign that an arm isn’t broken. Who knew?!”

“My daughter hurt her hand in soccer practice, doing a drill, by kicking herself in the hand. Her dad and I didn’t see it happen but our reaction to the tears was to tell her to rub some dirt on it and get back to practice. Her coach happened to be a plastic surgeon. He took a quick look and suggested getting it looked at. Primary care doc didn’t think it was more than a bruise. Turned out to be a growth plate fracture.”

“Dude. When I broke a bone at age 12, my dad, insisting it was dislocated, TRIED TO ‘POP IT BACK INTO PLACE.'”

“My parents thought I was faking scoliosis and a lazy eye.”

“My kid about died from a ruptured appendix and I told him to ‘suck it up and don’t whine,’ because I thought he was constipated. Oops. Still living that one down to this day.”

“Kid had what I thought was a cold with a lingering cough not long ago and kept complaining her throat was sore. I kept telling her it was viral and needed to run its course. She works in a pharmacy, after all. Finally took her in and found she had strep throat, a double ear infection and pneumonia.”

And the one that won the whole thread, courtesy of the lovely Toni McGee Causey:

When my youngest was 19, he was sparring at my brother’s karate school, and then was horsing around in the parking lot, and accidentally stepped forward into a round-house kick to the face. Drove home. Next morning, he doesn’t even look bruised. No black eye. But he said his teeth felt loose. I ignored him because there was no bleeding, nothing broken. He looked fine and we all know that a hard hit can loosen teeth. I told him they’d tighten up in a day or so. The next day, he mentions they’re still really loose. Then he sort of pushed on them and his entire upper jaw moved.

I took him for an x-ray, and they ended up doing an MRI. The doctor calls me over to view the results. He said, “I stopped counting the breaks at 37.” His eye socket (above the teeth) was shattered. The doctor said, “He’s lucky he didn’t lose his eye by not coming in earlier. ” Because it could have fallen into his cheek. It took 3 metal plates to hold it all together.

Suddenly, I didn’t feel so bad. Also, the kid got a pretty purple cast and is confused about why I keep telling her “Well at least your eye didn’t fall out!”