Twitter Facebook Pin It Email Article
Prev Autumnal Flower Arrangement for Thanksgiving Next Baby Monitors: Which One is Right for You and Your Baby? 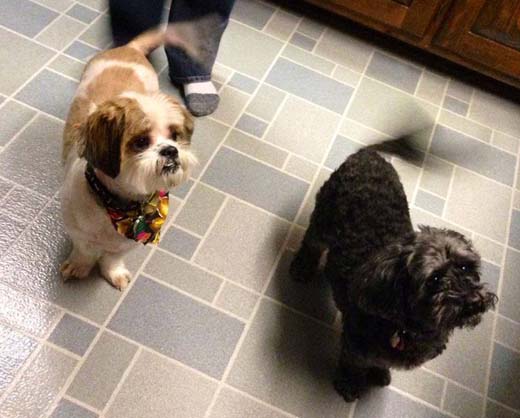 Unlike the situation Chris Jordan faced with her kids begging for a second dog, I am woman enough to admit that I am the one who led the charge of the “let’s get another dog” brigade. The kids were only too happy to fall into line behind me, stalking our favorite rescue sites and consulting Petfinder. My husband was the lone voice of reason: Aren’t our lives complicated enough, right now? Does it really make sense to bring another animal into the family at this point? He even took to referring to Licorice as The One True Dog to not-so-subtly make his point.

The kids (okay, and I) can be pretty relentless. We wore him down. It will be fine, I assured him. We won’t do it until we find just the right dog. This isn’t about finding any dog; this is not me having the canine equivalent of baby fever, after all. We have requirements that must be met, and we will be selective, and any dog we choose will be the right one for our family.

All of that was (is) true, and by the time Duncan came along, we’d looked at countless other dogs and even met a few of them. None were right. Duncan, though, seemed to meet the requirements: He’s a Shih Tzu mix (we have allergies, and Licorice is a Shih Tzu mix and has been a fantastic dog both in coat and personality); just the right size; not too young but not too old; friendly but reserved with new folks (just like Licorice was when we met her); his temperament seemed similar to Licorice’s and she tolerated him well; and he was well-attached to his current family, whose circumstances meant he was no longer getting the people-time he needed. He needed a family like ours. And we needed him, too. The kids and I made hopeful eyes at my husband. “I think he’s our new baby,” I said. He relented.

Don’t get me wrong; Duncan is a great little boy, and I think everything is going to be fine. And really, I felt like I’d thought this all through and there shouldn’t be any surprises. But just like you forget that labor is kind of the most painful thing ever and newborns cry a lot, I forgot that a new dog is like a new baby in a lot of ways. And I forgot that being re-homed is, quite simply, traumatic. Is Duncan going to fit into our family and be happy here with all of us? Yes, I think he will. But it’s going to take some time for everyone to adjust.

In the meantime, he arrived late last night because… well, if I had to hazard a guess, I think his family—committed though they were to doing what was right for him—was having a hard time saying goodbye. His mom was in tears when she dropped him off, and basically handed me his leash and his things and left. And while we knew he has some allergies and skin issues (not uncommon with this breed), either from stress or something else, he was clearly very itchy and uncomfortable. The late drop-off meant a vet visit would have to wait, and it left us just a couple of hours to get him settled before bed. As any sociable dog would’ve done in such a situation, he was playful and interested in us for about an hour… after which, it became clear, he was ready for his mom to come and get him and take him home.

We’d discussed putting his crate in my son’s room; part of the impetus for a second dog—and a younger male, at that—was to steer him more towards favoring our youngest, as Licorice seems to view him as a somewhat troublesome puppy rather than a playmate. I forgive myself for forgetting the realities of new-dog integration, a bit, but I wanted to smack my own forehead when my son quickly became overwhelmed and declared that 1) he was going to go to bed and 2) he did not want Duncan in his room. I think my kiddo is pretty good at going with the flow, autism and all, but this many changes (all stress is still stress!) added up to overload, for him.

Well, that was fine. We congratulated him on knowing his limits and bid my son goodnight. The rest of us would help Duncan finish getting comfortable and then we’d figure out the nighttime arrangements for now; we could just wait and see on transitioning him to my son’s room over the next few months. He and Licorice seemed to be tolerating each other well, and Licorice appears to be part gazelle while Duncan is either unable or unwilling to jump on furniture, so we agreed he could spend the night in my daughter’s room, where Licorice normally sleeps. Licorice would leap up onto the (fairly tall) bed, and Duncan’s bed could be placed on the floor. Problem solved.

Except… ten minutes after my older teen hunkered down with the dogs for the night, she came downstairs crying. Duncan had pawed at the bed, wanting to get up there (she thought), and so my daughter tried to lift him up to join her and Licorice. I don’t know what happened (it was dark in there, and probably Duncan was still out of sorts and a little scared) but he nipped her. It wasn’t bad (just a warning, I think, but Licorice has never so much as growled at us), but it hurt and freaked her out, and she wanted Duncan out of her room.

Cue the mommy guilt. I helped my daughter apply some Arnica to her hand while my husband brought Duncan downstairs and put him in the crate in my office… where he started to bark, as I talked with my daughter about how Duncan was just scared and hadn’t meant to hurt her. (“I know, but I was just trying to help!”) Upstairs, Licorice began to whine in response to Duncan’s barking. My husband wisely refrained from saying “I told you this was a terrible idea,” but I think he was biting his tongue pretty hard. New plan! It was time for us to go to bed, so we brought the soft-sided crate Duncan’s family had supplied into our room and put his bed inside of it. I coaxed him in and zipped the flap. We turned out the lights and climbed into bed.

First we listened to him thrash around inside the nylon enclosure, either trying to escape or get comfortable (maybe both). He finally settled, and my husband and I both exhaled. Silence. Then…

“Oh, good,” muttered my husband. “This one’s all moist, too.” (When Licorice gets into some heavy self-grooming, we’ve taken to exhorting her to stop being so moist.)

I slept fitfully, waking multiple times to scratching, slurping, and the shoosh-shoosh of nylon rubbing on nylon as the dog repositioned. I gave up around five, and when I unzipped the flap, Duncan happily trotted out, followed me outside to relieve himself, and accepted a few pieces of kibble from my hand. Then we played a little bit on the floor of my office, and when I sat down at the computer to work, he curled up for a nap. I don’t think he slept all that well, either.

In a year, none of us will remember what life was like before Duncan came along, I’m sure. For now, I’m going to keep the coffee going, reassure all sentient creatures in the house that I love them very, very much, and remind myself that all babies (furry or no) are hard work and a big adjustment, but ultimately worth it.