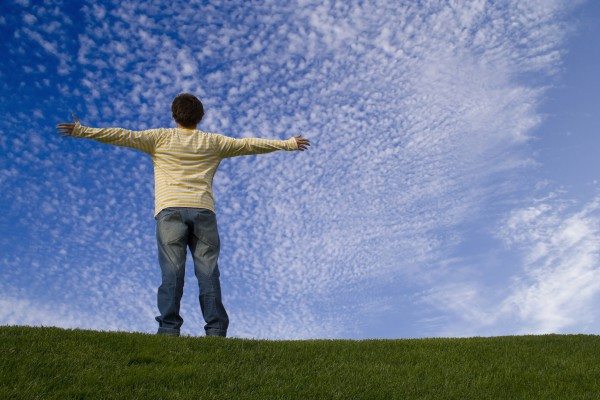 It creeps up slowly this desire to be independent and separate from you. One day they are hanging off your leg and you wish they’d just go away and play somewhere. Then the next day they are running out the front door shouting over their shoulder that they’ll see you later. And you wish they’d come and talk to you for awhile, but they have places to be, people to see, things to do. Most of the time it doesn’t include you. As it should be.

My kindergartener comes home from school most days and gives me a run down of every last detail that happened–who got a dreaded red star, who had a birthday, who threw up on the rug– there is nothing too minute to share. He still likes to sit with me on the couch. He likes to climb into my bed in the morning and whisper/yell in my ear. He likes when I blow raspberries on his on his stomach when his pajama shirt pulls up over his belly. Even so, he now has a life that is separate from mine.

My high schoolers are not so much into the sharing. And they really are not into me blowing raspberries on their stomach. Who would have thought?

We play this game, you and I, where you walk away from me. I spread my arms wide. You stop and turn after making it half way across the room and giggle to see me waiting there. You run to me, well do your zombie walk as fast as you possibly can, sometimes losing your balance. You never take your eyes off of mine. Your arms are spread wide and when you reach me you wrap your arms around me and nuzzle my neck with your face. I breathe deeply inhaling your scent. I never want to forget this moment, the way you are right now.

Yesterday we were playing on the floor together. You got up off my lap and began walking away. I watched from behind as you toddled away from me, your arms held up for balance, your hands in little fists. You were giggling. I waited for you to pivot around and look for me. You paused at the threshold. I put my arms out in anticipation.

And then… you kept walking. You walked right out of the room, never bothering to look back at me. I wanted to call for you. I wanted you to come running back to my arms.

I knew this was only the first time I would be watching you walking away from me, stepping out on your own. And while I know this is what being a parent is all about, letting go over and over again, until you think your heart is walked right out of your body. Maybe this is why it happens in such small steps, so that when you pack your bags and go off to college, confident that you know more than I do, I won’t be as sad to see you go. Maybe it is so your heart becomes hardened by these tiny fissures and doesn’t just shatter.

Nevertheless, as you walked away from me, and out of the room, I wanted to call out, “Wait. Come back. I’m not ready.”

At the time I wrote those words I thought it would get easier to accept my children walking away from me and becoming independent. I thought that each little step they took would make the next one not seem like as big of a deal. I have found the opposite to be true. Maybe it is because I have children who are only a couple of years away from being legal adults and short of physically moving out of my house there isn’t much left to asserting their independence.

My oldest son is now at the age where most of his friends are driving. He soon will be driving also. Now it isn’t so much him walking out of the room without turning back to look at me as it is him running out the front door, slamming it behind him, a quick “goodbye” shouted over his shoulder. Then getting into a car driven by one of his friends.

Instead I say goodbye to the already closed door.