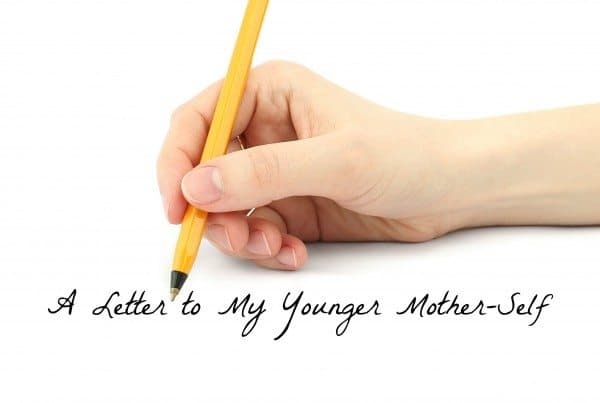 On The Eve of My Oldest Son Turning 18

A Letter to My Younger Self

I want to tell you that you have done it! You will raise a human being to adulthood. Both of you will come out of it alive and unscathed.  Well, except for your boobs.  Gravity and years of nursing will not be kind.  Flash everyone now while you have the chance.

The years will fly by,  I know right now you can’t believe that. But I am telling you as I sit on the other side of parenting, eighteen years in, that they will. Each year picks up speed. Life has a momentum that you cannot imagine today, in the early years when a day lasts an eternity.

Right now you have babies. They take up all of your time. You are waiting for the day when things will ease up, when you won’t be so exhausted all the time. I want to tell you it will happen. One day no one will wake up in the middle of the night, all the children will go to bed and sleep the entire night through. But you know what? Once you hit 40 you will be plagued with insomnia. Consider this preparation for going through life tired.

You don’t know yet how many children you are going to have. If I told you as you sat in that darkened nursery rocking your firstborn you would be frightened. There will be times when you wonder why you have so many children– when you feel like you are not giving any one of them the attention they deserve. But I am going to tell you now that you can’t imagine your life without each of them. Each one of them makes your life better. And louder. Best of all, you will never have to play a board game.

You are going to worry about a lot of things. The toys they play with. The way you discipline. The amount of TV they watch. The food they eat. That something you do will scar them for life and harm their delicate psyche. Stop worrying. I wish I could tell you that the past 18 years have been smooth sailing. I can not. But I do know that worrying won’t change a single one. The things you are the most worried about never come to pass. The things that will come up are those you never see coming. There will be heartaches. There will be boo-boos that a simple kiss cannot fix.

You are going to turn your fat baby’s car seat forward facing when he is four months old. You know what? It’s not safe. A decade later kids are rear-facing in their car seats until they are in middle school. I’m not even exaggerating! The good news is at least they can buckle themselves in by then. You don’t even know that is something you should worry about. See, so stop worrying. Also, plastic, lead in toys, high fructose corn syrup, crib bumpers, sunscreen, strings inside hoodies, window blinds … eighteen years from now you will marvel that any of your babies survived infancy. But they do and whether or not you made pureed peas from scratch or bought them in a jar doesn’t even factor into it.

You will learn that there are no awards given out at the end of your parenting journey for being a martyr.  I know, what a rip off!  At least we could get a wall plaque, right? Or a consolation boob job. 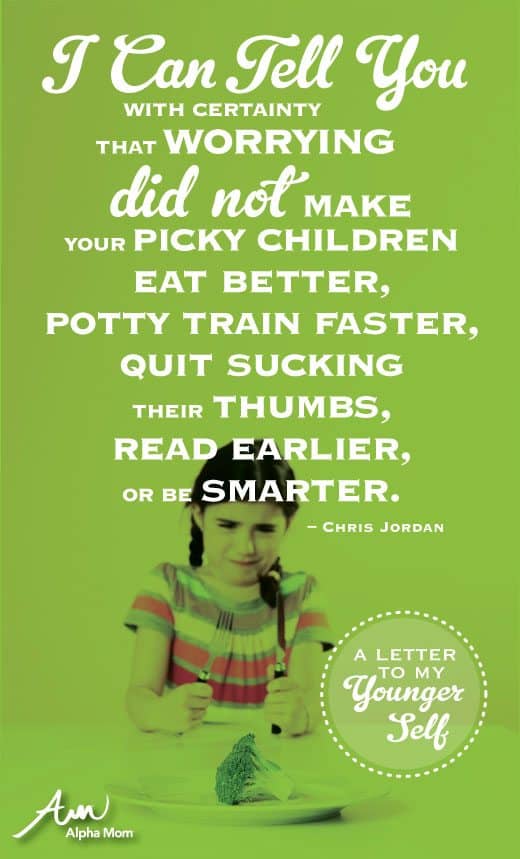 I can tell you with certainty that worrying did not make your picky children eat better, potty train faster, quit sucking their thumbs, read earlier, or be smarter. The same personalities you see in them as babies will carry through their childhoods. The colicky baby became the colicky toddler, became the colicky teenager, and probably will become the colicky adult. But hopefully he will live his colicky adult life in someone else’s house.  Everyone one of your kids can read, bathe themselves, is potty trained, can ride a bike, feed themselves, drink from a glass without spilling… and you cannot tell who learned to do these things at age three or who learned them at five.  None of them will ever master the art of loading the dishwasher or getting the dirty clothes into the hamper.  Be assured this is a defect in the Y chromosome and not at all your fault.

There will be days you will feel like the worst failure, but the good news is you still haven’t bought a Lunchable. It is the small victories that get you through.

In 18 years that baby you are holding will be a man. A man close in age to where you are right now. That protectiveness you feel is still there, but you have been forced to slowly let him go. Especially when he wouldn’t consent to be locked in the house forever.  This might be the hardest part, watching him step out into his own life and make mistakes, guiding him without nagging, balancing his need to be autonomous with your need to cling to his legs and beg him to not leave home. You will want to shout at him as he walks out the door, “I have kept you alive and well for 18 years, don’t mess this up for me now!”

In 18 years you will wish you could go back and live it all again. Try to remember that on the toughest days. Be as kind to yourself as you are to every one else.