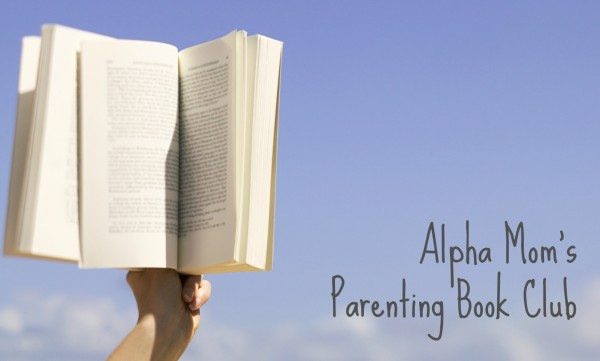 Alpha Mom Parenting Book Club: Kids Are Worth It! Giving Your Child the Gift of Inner Discipline

The way to get your kids to behave is to give them the gift of self-discipline. But exactly how do you do that? That is what author Barbara Coloroso outlines in her book, Kids Are Worth It!: Giving Your Child The Gift Of Inner Discipline

Kids Are Worth It! Overview

This is a really great book. I have read quite a lot of parenting books and I am not sure that any have resonated with me as much as this book did and in the way that it did. This book held a mirror to the way that I was parenting, the consequences of how I was parenting, and I did not like what I saw. Kids Are Worth It! author, Barbara Coloroso, asks the question, “Is my goal in parenting to influence and empower my children or to control them and make them mind?” 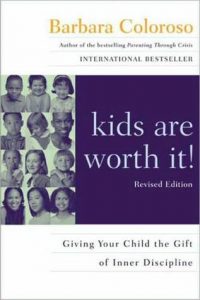 Coloroso divides parenting styles into three main types. 1) Brick-Wall: “Do it my way, or else!” 2) Jellyfish: those parents who are inconsistent and rarely enforce house rules, and 3) Backbone: firm, flexible and respectful parenting.

At first I read this and thought, ‘Of course I am a Backbone Parent! I’m not overly strict and I’m not a pushover!’ I gave myself a pat on the back for being so awesome! Sadly, the more I read through the book and read her examples of situations with children and how each type of parent would react, I saw myself for what I really am. It was such a shocking realization that I had to put the down for a few days and come back to it. During those days I really heard the words coming out of my mouth for the first time and thought about my parenting style and what I wanted for my relationship with my children.

I have often said that I am slow to anger, however, once I get there watch out! In dealing with the outside world this is a pretty good trait, but at home it isn’t. I realized that it isn’t so much that I am easy-going, as I had led myself to believe, as I do not like conflict. So I will ignore, pacify, ignore some more until I explode over something that all by itself is very minor. So a typical Jellyfish A Parent, which the author says is often a result of being raised in a Brick-Wall Family. Though I don’t identify with all (most?) of the descriptions of the Jellyfish Parent, I think it probably sums up my overall attitude. And whoa boy, that is hard to admit that you think you are doing one thing, but then realize you are parenting in a completely opposite way. Also hard to admit, I identified with a lot of the Brick-Wall Parenting when it came to my teenagers, probably because I was being a Jellyfish until I became the Brick-Wall. I do think, however, that most of us probably fall across the categories depending on what the situation is.

What I loved the most about this book was that Coloroso would give a parenting scenario or challenge. And invite you to consider how you would react. Then she would write what each of the type of parents would do. This style of writing means that you already considered what your reaction would be before you read how wrong you were.

In Chapter 4, “Children can not thrive on bribes, threats, rewards, and punishments. If you need to get rid of these tools in your parenting toolbox, you will need something to take their place.” This spoke to me. I don’t use bribes, threats, or rewards (or at least I didn’t think I did. Turns out they are a lot more nuanced than I believed) but I have nothing that takes their place.

“Some parents nag with finesse every morning, (‘Hurry up you are going to be late, don’t forget your gym sneakers. Do you have your library books? Where’s your coat? Can’t you remember anything?’). Kid goes off to school in great shape and parent is bordering on a coronary. Was Coloroso looking in my window when she wrote this? Because this sounds an awful lot like me. She offers really good suggestions on how to turn the conversation around and stop being the nag that you don’t want to be by offering instead a comment that provides basic instruction. In the previous case something along the lines of, “Check your list so you are sure you have everything before you leave the house.”

Punishment is an external force holding children accountable for their actions. Discipline “is a process that gives life to learning; it is restorative; it invites reconciliation.” Discipline involves real world consequences. These consequences are learned without nagging, reminding, or warning from the parent. Coloroso says, “If the natural consequences are not life-threatening, morally threatening, or unhealthy, it is good to let the child experience them, without warnings or reminders.” This is the one area that I am okay in. I have never even used the word punish with my children. My daughter loves to wear shorts, year round. Granted we live in Texas and it is fairly warm all year, but definitely not shorts weather when it is 40 degrees. I refuse to argue about things like this though. Usually I will say that she should check the weather before she gets dressed, but she will usually still chose shorts. She says she isn’t cold, so why does it matter? A mother of one of my daughter’s friends asked me why she was wearing shorts all the time. When I explained that it was my daughter’s choice what to wear and that she was happy wearing shorts, the woman said she would never allow her daughter to do that, because what would everyone else think? That was a pretty telling statement about how this family believes children should be treated. It also caused me to reflect on some of my own parenting choices and whether they were motivated by other people and not what was in my heart.

Throughout the book, Coloroso has quotes from other authors, philosophers, parenting experts, and religious leaders. In the beginning I found them a distraction, but as the book went on many of them summed up perfectly the message she was trying to convey:

Building a conscience is what discipline is all about. The goal is for a youngster to end up believing in decency, and acting-whether anyone is watching or not-in helpful and kind and generous and thoughtful ways. -James L. Hymes, Jr.

The chapter on the Alternatives to No was one of my favorites out of the entire book. Instead of saying No, Coloroso suggests three things:

She says the No should be saved for the really big and important things. I use number two frequently, but number one had never occurred to me. That simply changing the way that you say something has an impact.

She then outlines other areas that trip us up as parents, where we think we are being supportive or helpful, but are not:

– The mini-lecture! (Hi, I do this!)
– Asking questions that get us nowhere fast. (Hello, I do this, too!)
– Empty threats (I am queen of this with my younger children and they all know it.)
– Ultimatums (sometimes, yes, I do this, though I did not recognize it as such until I read the book.)
– Put-downs (Phew, thankfully something I don’t do!)
– Be Careful! (I do this all the time. I thought I was being loving and caring. Whoops!)

In the introduction of Kids Are Worth It!, Barbara Coloroso admits that she is not a perfect parent with perfect children. Something I found refreshing. She says her own children would ask her why she didn’t handle certain situations the way she was instructing other people to do. She writes, “The following pages are things I do, have done, would have done, wished I had done, and plan to do the next time.” And it was in that spirit that I read this book. What can I, as a parent, strive to do the next time? The past is the past. I can, however, move on and use the new tools in my toolbox instead of reaching for the old trusty ones that didn’t work so well.

You did what you did then, now you know better, you do better. -Maya Angelou

Final Thoughts on Kids Are Worth It!

There is just so much in this book that I could go on and on. Mine is filled with sticky tabs highlighting things that caused me to pause and consider my parenting. It will be one of the books that I refer to over and over again when I am facing an issue with my children.

1. What did you think of this book?
2. Did you find it as enlightening as I did?
3. Did you feel overwhelmed by all the things you thought you were doing right, but really are not?