Twitter Facebook Pin It Email Article
Prev Bug Repellents for Kids: What Should I Be Thinking About? Next “Why Do You Only Have One Child?” 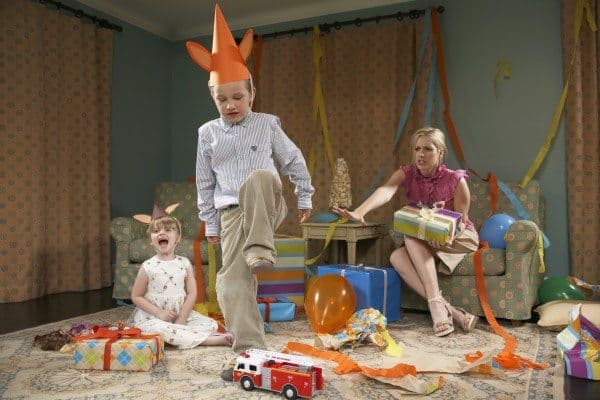 I have been a parent a long time, almost half my life at this point. (When did I get so old!?) I hear people talk about the phenomenon of self-entitled young adults and they all seem to scratch their heads and wonder out loud just what happened. I know how it has happened. Self-entitled young adults didn’t spring up one day on the own.  They didn’t grow up in vacuum. They are this way because they were taught to be this way.

Here is a list on how to raise your very own spoiled brat who will grow up to be one of those self-entitled young adults that we hear so much about.

1.  Don’t say no. When your child is young and misbehaving on the playground, for example he is throwing sand at another child. Don’t tell him No. Instead give him a very long explanation of why it isn’t nice. When he does it again, because he will, count to three. Punctuate each number with, “Do you hear me?” “I mean it!” And finally, “Don’t make me say three!” Then offer up no consequences, except a long sigh. Even better, get angry at the people who won’t move their children away from your sand-throwing child. Repeat this scenario as often as possible for the next 14 years. So your child can know who really is in charge.

2. If you do make the mistake of saying No, fix that as soon as your child whines or complains. This may make a lot of things difficult for you in the early years, such as when grocery shopping, but remember it isn’t about you. Often giving her what she wants will make her be quiet and stop whining for a few minutes. Until of course she wants the next thing. And make sure you give her that thing, too.

3. Give your child every thing he wants, without him ever having to wait for it or, heaven forbid, work for it. Even better, get him things that you don’t have because you can’t afford them. But that’s what you signed up for when you became a parent. It doesn’t matter what you want. You should only be happy when he is happy!

4. Make sure your child knows how much you sacrifice for her. This will further the belief system that she is in fact the most important person in the world. Your child is so important that you have been wearing the same clothes for years and talking on a flip phone. Point this out to her as often as possible.

6. If your child doesn’t do well at something, make sure you blame the other people. He didn’t get an “A” because his teacher hates him. His team lost because everyone else on the team is horrible. He didn’t win the election because all his peers are jealous of him. It is never his fault, remember to reinforce this.

7. Bad mouth everyone in authority. The coaches, the teachers, and the police officers. None of them deserve respect. You have already shown your child that he has more authority than you, now just extend that to the community. Your child is the most important. 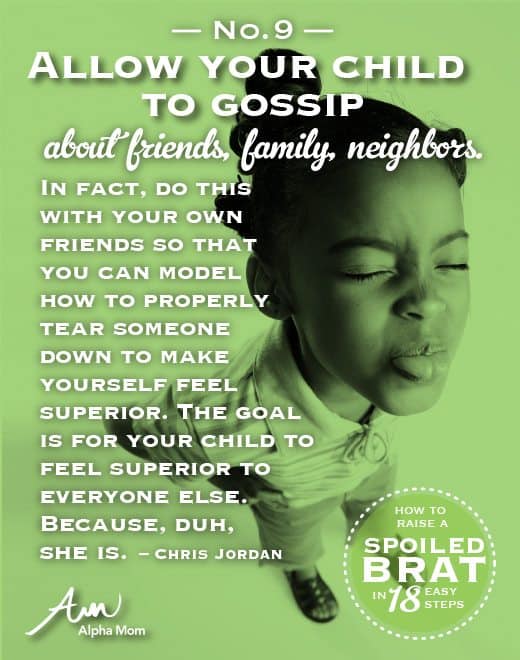 9. Allow your child to gossip about friends, family, neighbors. In fact, do this with your own friends so that you can model how to properly tear someone down to make yourself feel superior. Remember the goal is for your child to feel to superior to everyone else. Because, duh, she is.

10.  If your child breaks something, replace it. Hopefully with something better so he is able to forget that slight moment of sadness and regret he felt when the item broke. Everything is replaceable..

11. If your child makes a mess, both literally and figuratively, clean it up for him. He is probably tired from all his shopping, texting, taking selfies in the mirror.

12. In fact, don’t make your child do chores. It takes more effort to get her to do chores than it does to do the chores. So just do it yourself! Seriously, why waste your time arguing with your child. You know how to work the washing machine, you can pick dirty clothes up off the floor, you can unload the dishwasher. Set the precedent early: the world is here to serve your child!

13. It’s never your child’s fault. I know I have said this one already. But it is a big one. Lack of personal responsibility is the cornerstone of raising a self-entitled adult.

14. Never let your child be bored. If she has tons of toys already and can’t find anything to play with, buy her more toys or video games. You obviously have been buying the wrong ones. It is your fault, never hers! Plan and schedule every moment for her so that when she’s an adult she can expect the world to entertain her.

15. Never let your child be unhappy. If you don’t know why your child is unhappy, just buy him things until he forgets.

16. Make rash threats and unenforceable consequences that both of you know will never happen, because you don’t want to make your child sad or mad at you.

17. Let your child quit anything and everything, whenever she feels like it, regardless of the impact on everyone else involved. Because no one else matters as much as she does.

18. If someone tells you about something your child did wrong, blame the other kids who are involved. Blame the other parents. Be angry at the person who is telling you. Your child is perfect. And therefore, by default, so are you.

If you’re just pregnant now, do all these things and you too will have your very own self-entitled adult in 18 years or so.

Disclaimer:
I have done some of these things. Some I have done more often than others. Haven’t we all? Because we are human and flawed and sometimes want to take the easy way out of a situation. Or, because we really don’t want to make our children upset. Or because we are just weary. Or maybe because your child has been diagnosed with  behavioral and/or emotional issues and you are trying to pick your battles. I raise my hand here and still wonder if I fought the right battles.  It isn’t easy to pick up your child and leave the playground when you, too, want to sit outside and enjoy the sunshine on your face. It isn’t easy to have a child throw a tantrum in the check-out line while people stare at you. It is time-consuming to insist with your preteen to redo a  chore because s/he didn’t do it as well as you know s/he could the first time. And then lather, rinse and repeat. It isn’t easy to admit that sometimes your child is the one who is acting like a little brat.

It is doing all the steps above consistently that will get you a spoiled brat. If that’s what you want, carry on! If not, it is never too late to change your ways.

YES!!! All of these things, yes! I know there will be a day that I’m tired and he’s whiny and I’ll give into him. However, it is my mission in life to raise a respectful child who knows what a good day of hard work and earning something will get you.

AMEN AMEN AMEN! Thank you! Can you publish this and send it home with every new (and repeat) mother when they leave the hospital after childbirth? Too many parents fear the outbursts, tantrums, sad faces, whiny voices, etc and are willing to constantly put a band aid on the situation rather than actually try and remedy it, THANK YOU. Love this.

OMG, yes!!! The only thing I would change is # 8. I would make it a lack of respect for basic rules, laws, and MANNERS. To me manners count as basic rules, but it obviously doesn’t mean the same thing to everyone. I was just in line recently at Subway behind a man and his two children. The son, who was probably about 10, started saying loudly to his Dad “Yuck! Is that your sandwich! That’s DISGUSTING! Barf! I’m going to throw up, that’s so disgusting!!” and making barfing sounds. I couldn’t believe the father didn’t say anything! And the… Read more »

I’m glad it’s never too late. I think I do a pretty good job patenting my boys, but I am absolutely guilty of more than a few of these. My main issue? I hate making them sad. I will start to follow through with a punishment and then I can’t do it… don’t want them sad. Sigh! (I also suck at saying no to buying things they want. Although I am definitely getting much better at this.) I am proud that so far, they seem to be very good children who know how much I love them.

Excellent post! My daughter asked me something today about an adult. If I remember correctly, it was something that she had observed about them. She asked why I didn’t tell her. It gave me the chance to explain that I don’t tell my kids negative things about adults because it causes them to think badly about those adults. We should model respect for other adults, especially adults in authority over our children such as teachers, pastors, grandparents, etc.

I have a 1 year old. At the grocery, she didn’t want to sit in the cart. I literally stood there holding her while she stood in the seat yelling for a few minutes while calmly saying “I hear you. I understand you don’t want to, but we need groceries and we all have to do things we don’t want to sometimes.” She may not have understood exactly but she eventually sat down and behaved the rest of the time. Sometimes it is our job to help them navigate their feelings and express them appropriately. This is a skil some… Read more »

Who are the 10 kinds of guys that you will get in contact with during high school days? | whoguys

Um YES! Thank you.
I need a literal translation of this to send to a select few family members.
If I sent them this version, it would go straight over their heads. They’d probably interpret it as what to actually do with your kids.

Hilarious and so true.