Twitter Facebook Pin It Email Article
Prev The Daytime Caretaker vs. Nighttime Potty Training Next 17 Ways to Be a Happier Parent 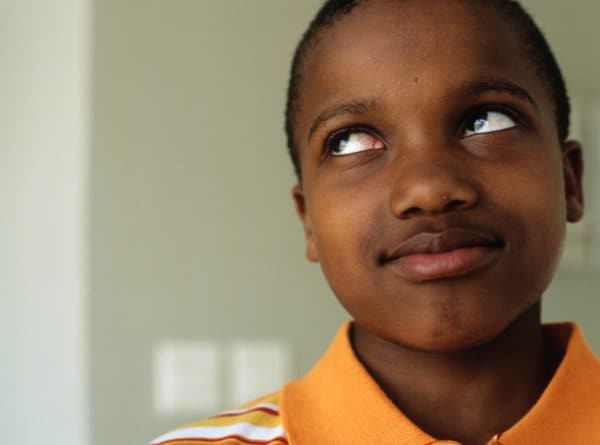 How To Have The Puberty Talk

If you’re anything like me, puberty wasn’t a lot fun. There were pimples, training bras, and constant fights with the parents. But guess what might be even worse than that long-ago horror show? Watching your kid go through it.

If you have a son in the 9-12 year old age range (approximately), chances are you won’t actually see the first sign that he’s starting puberty. Rather, you’ll smell it. Or at least that’s how we knew our 11-year-old’s body was starting to change and that we needed to buy him Baby’s First Deodorant before the entire family passed out from his new ripe aroma. Whew.

If you have a girl of this age, you’ve probably noticed other changes besides armpit odor that signal the start of puberty, most likely breast development (aka “breast buds”) or increased emotions (aka “door slams”). Some girls may have already started menstruation at this age, so maybe you’ve even had the mother/daughter period talk. (Or you’ve quietly slid the free Kotex pamphlet under her bedroom door before running off to ceramics class like my mother did to me back in the enlightened 1980’s.) (And don’t even get me started on the day she taught me how to use a tampon—via my panicked phone call from Camp Kormoranta.)

This new phase of development may seem fairly natural and normal to you, but it’s probably the exact opposite to your child. Puberty can be embarrassing, awkward and scary. Just ask any girl who’s out bra shopping with her mom when a cute guy walks by. Or any boy who suddenly has an erection in school and doesn’t know what the heck’s going on. (And yes, that’s going to happen.)

For that reason, any puberty advice or information you give your child now is only going to help their comfort level during this transitional time. I mean, I know I could have used some insight when I was a confused 11-year-old reading the highlighted parts of my friend Kristi’s copy of Judy Blume’s “Forever.” (“How can you use a diaphragm for birth control!? Isn’t that your ribcage?! That makes no sense!”)

Here are our tips on how to have an honest and frank puberty discussion with your child.

Before we start, tell me, what exactly is puberty?

By definition puberty is “the period during which adolescents reach sexual maturity and become capable of reproduction.” Basically, it’s the process of physical changes that give them an adult body. That said, it’s also a word that’s kind of fun to say—puuuuuberty. Only don’t say it around a kid who’s actually experiencing puberty or they’ll probably, like, die from total mortification.

Four to five years. Boys average three years and girls average four years. Of course, some kids are faster and some are slower.  Per the book From Diapers to Dating, it can be “as quick as 18 months and as long as eight years.” Uh-huh. Let’s all hope it’s not eight years.

Should I wait until I notice changes with my kid before I start The Puberty Talk?

It’s definitely a personal decision, however letting your kid know what body changes to expect in advance will make him/her less fearful when he/she starts to experience growing pains in her chest or begins to sprout hair where it’s never sprouted before.

And while it may feel awkward explaining to your son what a “nocturnal emission” is, getting that knowledge before he actually has one will help him not freak out. (And yes, he’s going to have one. It’s no coincidence that boys are encouraged to start doing their own laundry around this age.)

The same thought applies to girls and their periods. Even if you think your daughter is years away from getting hers, you still need to prepare her because it’s always a surprise. (And it’s always when you’re wearing white pants. Why is that?) Plus, girls are starting menstruation earlier than they did a generation ago. There are many, many books and resources that can help you explain it all. (And they’re all much better than my free Kotex pamphlet, thank you very much.)

What other exciting physical changes are coming?

Per Everything You Never Wanted Your Kids to Know About Sex (But Were Afraid They’d Ask), a girl’s growth spurt will start shortly after her breasts begin to bud, then her hips will widen and she’ll gain more fat. (It might be a good idea to tell her that this weight gain is because of biology, not because she’s eating too many chips.) By the time she begins to menstruate, she’ll be approaching her adult height. This can make girls feel weird, but let them know the boys are on their way to catching up.

Because, as you may remember, boys start their growth spurt about two years later than girls. It begins with their feet and continues upwards, including the growth of their scrotum and then their penis. (And yes, even at this age, they’re concerned about penis size, so be ready for that question.) Also note that boys’ muscles and bones don’t always grow at the same rate, which explains the famous adolescent clumsiness.

Is it true that puberty turns kids into nasty, emotional trainwrecks?

Hmmmm….why don’t you go to the mall and ask a mother helping her daughter try on dresses that question? She’ll be happy to tell you right after she stops cowering in the corner.

The fact is that due to hormones and an increased need for independence during puberty, most kids aren’t their usual sweet selves to their parents at this age. Or maybe they are one day and not the next. Or one hour and not the next. Or they’re nice to their friends and not to their family. We recently had a taste of this unpredictability at our house when our upset 11-year-old ran into his room and slammed the door. Ten minutes later, he was snuggled up to me on the couch like nothing had happened. I’m still not sure what to make of it.

But while it can be very hard to deal with your child during this time, it’s still important to to inform them that you know these emotions are all part of their growing up. Wait for a calm moment to tell them that you’ll try your best to understand their moods and you won’t take them personally. They will then roll their eyes at you and say “Moooooom!” but hopefully a bit of your message will get through and they’ll have some comfort and reassurance.

This seems like a rather huge topic, so let’s cut to the chase: What’s the most important thing I can tell my kid about puberty?

That he or she is normal. There are a lot of changes happening to their bodies, minds and emotions right now and that can make them feel very vulnerable and strange. Let your child know that they can talk to you about anything that’s happening to them, whether it’s physical or friend-related. Or (Eek!) boyfriend or girlfriend-related.

Basically, keep communication open. Offer to buy them puberty-related books (which they probably won’t want, but will read when nobody’s looking). Ask your pediatrician if there are any concerns. And if you’re a single mother and uncomfortable with some of the boy subjects, see if an uncle or other male relative can be of assistance. Talking about penis size with your tween isn’t as fun as you’d think.

Remember, puberty is just another stage. Sure, it’s not the cutest stage a child will go through—just look at any of my family vacation photos from the Grand Canyon in the early 80’s that show me scowling and my mom ready to push me off the cliff—but a stage nonetheless. Which means it’ll pass. Your child is transitioning into an adult and with a lot of honesty and communication, you’ll both be in a good place when he or she finally gets there. Deodorant and all.

So, if you’ve already talked to your kid(s) about puberty and their changing bodies what have you learned? We want to know.

Ready for “How to Have The Sex Talk with Your Kid,” I guess? Also, stay tuned for: a review of books on puberty and sex education.