Twitter Facebook Pin It Email Article
Prev Your Baby is Teething! Here’s What Will Help. Next The Politics of Birthday Parties 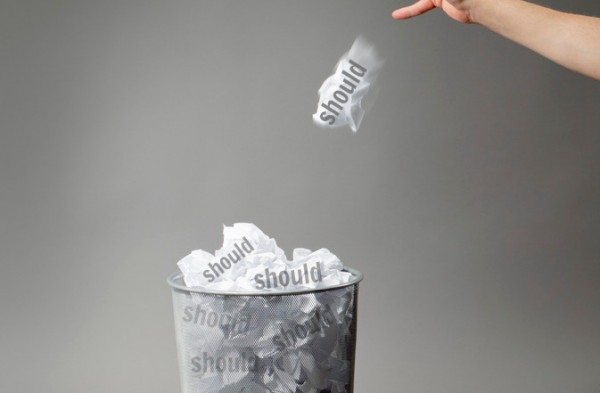 Getting Rid of the Shoulds

I have decided to strike the word should from my vocabulary.

When my daughter was in Girl Scouts, she would earn badges that had to be ironed and/or sewn on to her vest. I was always way behind on getting them onto her vest. In fact, I just came across a few stray badges in the kitchen junk drawer that I haven’t gotten around to attaching to the vest. My daughter quit Girl Scouts three years ago. One of the troop leaders would send out emails reminding us to attach the badges. I always felt like they were directed at me. I should get around to putting those badges on in a timely manner. Surely every other kid there had a mom who knew how to work her iron and probably owned a sewing kit.

I dropped my daughter off one day for her Girl Scout meeting and a little girl ran up to us. I looked down and noticed that her badges had been stapled on. Stapled. On.

I wanted to meet that mother. I felt like we we’re kindred spirits, doing our part to make the other mothers feel good. Somebody has to do it, you know.

I used to feel bad that I wasn’t one of those crafty, always-volunteering-at-the-school-carnival, having-playdates, and sleepovers-every-weekend-type mothers. I would beat myself up often with the Shoulds. I should make my kids an adorable Pinterest-worthy after school snack. I should pack them Bento Box lunches that would be the envy of…. I’m not sure. Certainly not the other kids. I should remember the tooth fairy in a timely manner so my 8 year old doesn’t hand me three teeth and say, “How about you just give me the cash and we can all stop pretending?” I should let my daughter have sleepovers every weekend and not care that no one actually sleeps. Even though I am pretty sure it is my weekend, too. I shouldn’t be so selfish!

The problem with Shoulding is that it implies whatever other choice you are making isn’t the right one. I have been trying hard to not just stop saying should to myself, but to my kids. Instead of saying, “You should do your homework now.” I have been saying “Have you thought about doing your homework?” “You should go to bed earlier” becomes “What do you think you could do so that the mornings are easier for you?” “You should wear a jacket” becomes “I saw it was only going to be 70 here today.” Yes, that is jacket weather in Texas.

The problem with the shoulds is that they cloud your head. Shoulds make you feel weak, like a failure. Shoulds sit on your shoulders and weigh you down with their perceived enormity.  Shoulds get in the way of you appreciating what you actually do–the things that matter to you and to your family.

Getting rid of the Shoulds is empowering. It means that the other choices we make are valid. I could do X, but I chose to do Y. I may not have sewn those badges on in a timely manner, but I certainly wasn’t doing nothing with my time. There is only a set number of hours in the day, and try as we might, we cannot get more. And have you ever had someone tell you “what you should do?” It’s no surprise it doesn’t work when we say it to our kids, because hearing someone say it to you instantly makes you want to do the opposite. What does it do inside our heads when we say it to ourselves?

This year I am taking the photos for my son’s football team. I volunteered to make the memory books for each kid and I am in charge of making the weekly game programs. I love this stuff. To me this isn’t drudgery. It’s fun. Last week a mother of one of the players came up to me and commented that I was doing a lot. She said it in a way that led me to believe she was feeling bad for not volunteering to do more. I told her, “I am making up for all those years when I didn’t volunteer at the class parties and field days.” She laughed. “I did do all of those things. And I loved every minute of it!”

I would have rather stabbed myself in the neck with one of those cafeteria sporks. And yet, I always felt like I should have been there.

The feeling I had after the conversation with this woman was maybe we not only need be kinder to ourselves, but also to each other.

This week there was Pajama Day at my children’s elementary school. My kids don’t have pajamas. Or at least none that are acceptable for wearing to school. And they don’t want pajamas. They prefer to sleep in shorts and t-shirts. And yes, sometimes, some of them will wear these to school the next day. I’m looking at my 8-year old son here.

For a moment I thought, I really should get them some pajamas.