Twitter Facebook Pin It Email Article
Prev How To Have a Successful Outing With Your Kids Next I Have Teenagers, Therefore I Cook 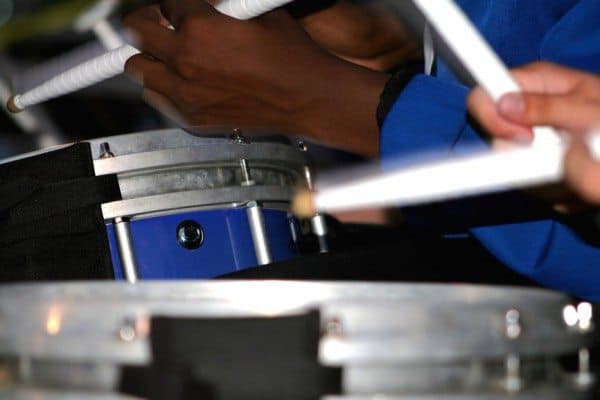 Are you sick of listening to me go on and on about high school marching band? Too bad! We got a great reader question the other day on my original post, so I want to share it here and answer, as I’m sure Maria isn’t the only one wondering. She writes:

Maybe you or your readers can help…how do you evaluate if a school has a good band program? I have a 7th grade trumpeter. We are thinking of moving to another state. She loves band, and I want to make sure she continues to have a great band experience. Any insight? Here in Texas we have UIL and I know other states have similar programs. Should I look to see the schools that win the most of those contests? I don’t know if this is the best indicator. Any insight you can give would be most appreciated.

I don’t claim to be an expert, Maria, but I do think there are several pertinent areas to examine when trying to determine whether or not a band program is a good one.

When I praised band directors in my original post, I did get multiple bitter comments from folks who insisted that not all band directors are selfless and wonderful, and of course… they’re right. I still think most band directors are in for the love of kids and music, but there are exceptions. How do you know if a band director is a good one? I can tell you that our director gives the same speech every year at the first meeting and it always starts with, “I am here to help you raise your children into productive members of society. I will use music as a tool in that endeavor, but my main goal is to produce good citizens.” Not everyone is going to say that—and not everyone is going to see it that way, either—but it told us right off the bat that we would have no worries about dealing with a tyrant who only wanted trophies. To me, that attitude tells me my kids are in good hands. From a logistical standpoint, find out how long the director has been at the school, and ask about any changes during his tenure there (good or bad). Find out what the rules are (a good director of any school activity has a set of “good stewardship” rules for the kids even outside of said activity, and sets an expectation of excellent behavior in and out of his purview). You’re looking for someone who loves teaching, loves kids, strives for excellence, and wants the band experience to be fun. Which leads us to…

The same director who talks about raising good citizens tells the kids they’re a family, over and over. In fact, this year he declared their “theme” to be relationships, and the kids have been encouraged to view socializing together as important as rehearsal time together. This is the sort of thing you have to both talk to people about directly and just sort of suss out around the edges. Are the band kids generally good students? Is the group pretty cohesive? Are there “stars” and “favorites” or is everyone important? Do they look out for each other? Do they respect the director and are they proud to be part of the group?

Did I mention that marching band should be fun? It should be fun. Doing the same thing over and over isn’t as much fun as doing new things. Again, ask around for some history—is the show similar every year? Do they experiment with different genres and different formations? As much as most teens love marching arrangements of pop music, seeing your kid learn to appreciate jazz or Latin music or anything outside of their comfort zone, really, is amazing. Variety keeps them learning and keeps them engaged. I would also say that competitions have their place in the marching band experience, but less for the trophies and more for the “let’s go show off our hard work” aspect of it. Do you want them to be competing every weekend? I’d say no. But one to three competitions during the season? Yeah, that’s probably going to be great motivation and some fun experiences. Winning is nice, of course, but it’s not necessary.

For as often as we talk about work-life balance for busy adults, I’m astonished at how often some people seem to neglect this consideration for our teenagers (who are, after all, still children). A good marching band will require dedication; it’s a very time-intensive endeavor before and during football season, what with rehearsals, games, and weekend competitions. Finding a balance between enough rehearsal time but allowing kids sufficient time to have lives can be tricky. To determine how you feel about this one, you’ll need to talk to the director, other parents, maybe some band kids, and—here’s the important thing—listen to your gut. My kids do an intensive band camp (that’s pretty common) before school starts, and during the season they have two full-band rehearsals a week (and occasionally an additional section rehearsal) plus a game. We do just two competitions each year and usually a parade at the end of the season. It’s a lot of hours, but does leave the kids ample time for homework, family time, and just general teenager time. In contrast, my son’s best friend attends a school where they have full-band rehearsal three times each week, for nearly twice as long as our rehearsals, plus a game and a full-day Saturday rehearsal if they’re not at competition. In my opinion that’s overkill, and my son’s friend is not having a good experience. (Lest anyone jump in here to point out that this is how excellence is achieved, I disagree. Both bands attended the same competition, and our band did much better than the practice-all-the-time-band, which seems to be composed of exhausted and unhappy kids.)

What are the numbers of freshmen, sophomores, juniors, and seniors in the band? A “top-heavy” band—with many more upperclassmen than younger students—may have experienced some changes which have resulted in poor recruitment or desire of incoming students to join, and could indicate a problem. Similarly, a “bottom-heavy” band—with tons of younger students but poor retention—can indicate problems, as well. Typically a solid band will have some drop-off in the upper grades—due to jobs, college prep, changing interests—but will still be fairly evenly distributed throughout the grades.

If all else fails (or if you still have questions)… go to a football game and watch the band. Are they having fun in the stands? Are they having a good time on the field? You’ll be able to tell. Talk to some of the parents, too. I’ve found parents are very quick to praise the good directors and share their misgivings about the not-so-good ones.

Good luck, Maria, and I hope you’re able to find a great program for your daughter! Marching band rocks!