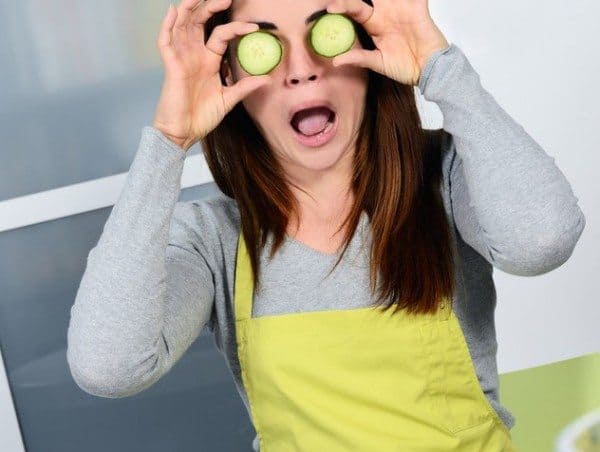 Feeding A Vegetarian Kid When You’re A Carnivore

I don’t know how it happened. Actually, that’s not true. I do know how it happened, it’s just that it still confuses me. Our family is most definitely composed of omnivores, with a heavy carnivore bent when it comes to cheeseburgers. Sure, I served the kids salads… with their chicken. We eat everything. But meat always figured prominently. And then one day, my daughter looked at some crocodile print boots I was ogling online and—concerned—asked, “Those aren’t really made of crocodiles, are they?”

I laughed, and answered, “No, of course not. They’re made of cows.”

She was horrified. Horrified. Somehow she’d made it nigh unto middle school without realizing that leather came from animals. I foolishly tried to (in retrospect, I don’t even know what I was thinking) make it better (ha!) by pointing out that cheeseburgers came from cows, too! And that was it. Her horror grew, and she sputtered about how wrong it was to eat animals or kill them for their hides. She never ate meat again. (She does, occasionally, comment that something “smells so good” or “looks yummy,” but she never partakes.) You can find my daughter’s picture next to “conviction” in the dictionary.

It’s been four years, and I am still baffled to have this vegetarian living in a household full of people who would cheerfully stab each other with a fork to get at the last slice of bacon. On the other hand, I admire her stance, and I figured it was my parental duty to both support her and look at how the rest of us could maybe make some healthy changes as well. If you’ve got a kiddo who’s decided to give up meat (or make some other dietary change), your smartest first move should be to have a discussion with your child and her doctor to go over any potential medical concerns. (For example, my daughter was slightly anemic before she gave up meat. She now takes a daily iron supplement and we actively seek out iron-rich foods for her.) Assuming there’s no issues, you can survive your kid’s decision.

Here’s how we make it work:

Oh, in the olden days you probably would’ve had to visit a nutritionist, but thanks to Dr. Google, most of the information you could possibly want or need about how to make sure you get adequate protein as a vegetarian is just a few clicks away. Meat is “easy protein,” but if you eschew it, it takes a little more planning to get what you need. Find yourself a good reference guide and then talk with your child about what she’s willing to eat. You don’t need to be charting intake, or anything, but at least in the beginning you do need to pay some attention to protein while you figure out these new eating habits.

Start planning meals, even if you didn’t used to.

Before my daughter went vegetarian, I was much more likely to do a fly-by-the-seat-of-my-pants approach to family dinners. That’s fine for plunking a roast in the crock pot in the morning or tossing some chicken breasts on the grill at night, but cooking things like dried beans actually takes some planning and lead time. It turns out that weekly menu planning cuts down on the grocery bill and weekday stress, so it’s a win all around.

Resist the urge to rely on fake meat.

A lot of vegetarians (especially kids) go for the old, familiar foods in processed, veggie-derived form. I’m not saying you can’t ever go for the preformed veggie burger or fake chicken nuggets, but they’re not good diet staples. For one thing, they tend to be just as (or even more) unhealthy as their fast-food, meat-derived counterparts. For another, they’re expensive. Finally, they tend to be loaded with soy, which contains phytoestrogens, and is therefore something growing bodies should consume only in moderation. You’ll probably find that continuing to prepare meat-centric meals and then popping out a frozen fauxburger as your vegetarian’s “main” is an easy short-term solution, but it’s kind of a crutch. (Confession: we tend to keep an “emergency box” of faux-something in the freezer.)

If your kid is old enough to assume agency over her food choices, she’s old enough to help you plan and cook meals. All of those frozen additive-filled convenience foods can be made from scratch, in a healthier way, in vegetarian form. Yeah, you’ll need to do some experimenting, and yes, it takes longer than cooking burgers or cutlets, but the result will be healthier options that most likely your whole family will enjoy. (P.S. Hello, sneaky quality time with the kid who’s usually too busy texting friends to bother with you….)

Build a new arsenal of family meal favorites that work for everyone.

Our family eats fewer meat-centric meals now than we used to; it’s just easier when everyone can have the same meal, together. (Did I mention that Mother Nature gifted me with a gluten intolerance to celebrate mid-life? She did. Coming up with family meals that are both vegetarian and gluten-free can be challenging, but we manage it.) It turns out that we all really like homemade falafel, and even the vegetarian’s picky little brother agrees that lentil tacos are just as good as ground beef. We do an eggplant casserole that’s sort of like parmigiana without the breading, and hey, quinoa is versatile and delicious. When I do make a roast or we have burgers or chicken or whatever, we have options; I make sure there are plenty of sides, plus leftovers from a veggie meal my daughter can have that night, or she can grab a frozen veggie patty and nuke that, instead. Every so often I’ll do a meal separated into components where everyone can fix what they like on their own plates, too. (There’s a spinach/garlic/lemon/shrimp pasta thing I do when I feel like dirtying every pot in the house, apparently: Regular pasta for them, gluten-free for me, and shrimp cooked separately so the vegetarian’s plate is never touched by anything with a face.) (I once tried to convince her that shrimp don’t really have faces so much as just… you know… front ends, but I lost that argument.)

For whatever it’s worth, plenty of people assured me that my child was “just going through a phase” when this first started. It’s the longest phase I’ve ever seen, if that’s true, but even if it had been, I feel like she’s helped our whole family to expand our palates and make healthier food choices. It’s been good for all of us.

I still eat meat… just, you know, not as often as I used to. (I’m pretty sure that means I deserve extra bacon. Just saying.)