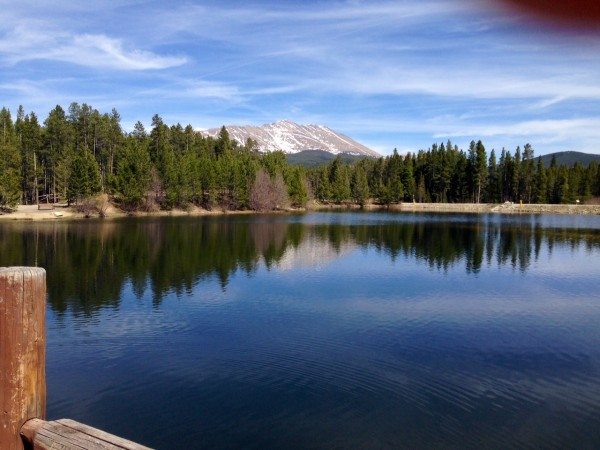 The Unexpected Views On Our Extended-Family Vacation

My father thought he was just asking for a special present for his 70th birthday, four years ago—all he really wanted, he said, was to gather up all the kids and grandkids in one place and take a vacation. So rather than allowing us to buy him something for this auspicious occasion, he took all of us on a cruise. It was awesome, for all kinds of reasons. In fact, it was so awesome, my dad decided that we needed to make this gathering-of-the-family-from-the-ends-of-the-earth thing a regular event, and so, two years later, he took us all to the Grand Canyon.

Here we are again, two years after the last trip, and this time we’re all in Breckenridge, Colorado. It’s beautiful here, and the fact that once again we get to spend some time with the whole family under one roof is great, of course, but I’m not sure if the people here know that up at 9,600 feet or whatever it is that there isn’t all that much oxygen. Silly me, I am used to my pedantic life at sea level, where breathing is simple and walking up a flight of stairs doesn’t make me feel like I have a hangover. I mean, the last two family trips were so incredible, I was prepared for a three-peat of instant cousin camaraderie and family fun and non-stop merriment.

There’s bad news, and there’s good news: The bad news is that my entire little immediate family suffered varying degrees of altitude sickness, which meant headaches, lethargy, and general malaise for the first few days. The good news is that my daughter and husband both had mild cases, and I woke up yesterday feeling fantastic (it’s amazing how good it feels to stop feeling awful), and my son was better by yesterday evening. So it was just a brief delay to the start of the usual fun.

The best news is that even though we only do this every two years, we seem to pick up right where we left off. There has been food and laughter and shrieking, giggling small children, and the fascinating exercise of watching my children through other people’s eyes. I know that my kids are growing up—heck, it has been mentioned more than once that if we continue on and do this in another two years, we will be doing it just before my oldest starts college—but to watch people I love but don’t see often comment on how tall they’ve gotten, how deep his voice is, how grown-up and patient she is with her little cousins… it’s different.

My daughter is never more her most kind and loving self than when she is with small children. As the oldest in a family where her “little” brother isn’t far behind her, she doesn’t typically spend a ton of time with little kids. Also, as a teen who often acts like a toddler but demands to be treated like an adult (to be fair, I just described most teens, right there), I wouldn’t say she’s… uhhh… known for her great patience and altruistic nature, most of the time. But the same kid who “just a sec”s us at home and “no, I don’t want to” “and “whatever”s us at every turn has never once responded to a “Will you come out and play with us?” here with anything but, “Of course!” She dotes on her cousins. And they adore her.

My son has been unwell for a lot of the trip, so far, but even still, he’s charmed his cousins and cracked a bunch of jokes (at appropriate times, even) and been helpful and polite, drawing comments from the family about how much he has clearly matured in the last couple of years. “He’s so different,” has been murmured to me several times. It’s hard to see when you’re right up close to it all the time, I guess. Seeing those changes through fresh eyes is incredible.

Last night we played Cards Against Humanity after the little kids and my youngest had gone to bed. Only, it took a little bit of time to convince my stepbrother that he really wanted to play with, as he said, “a child” present. (Note for the record that Cards Against Humanity’s tagline is “a party game for horrible people,” and also that they rate themselves as being for ages 17+. My daughter is 16. Also note that the deck in question is hers; she brought it along specifically because she knew we’d have a big group to play.)

My daughter blinked at him. “I know it’s in terrible taste,” she said, with a chuckle. Somewhere in the back of my mind, I remembered that the last time we did this trip, I’m not sure she actually talked to her uncle.

Seeing this wasn’t getting him off the hook, he turned to my husband. “Are you playing? You want to play this vulgar game with your daughter?”

My husband looked up from what he was doing. “What? No, I don’t.” (I don’t know if he was needling her or serious, but this resulted in some eye-rolling and possibly some whining.)

Eventually we assembled all the “kid” adults (that’s everyone but my folks, who chose to go to bed, instead) and my daughter and we played. It really is vulgar. And hilarious. And we played it with my kid right there, who is also hilarious (okay, sometimes she is also vulgar), keeping right up with us. And we all howled with laughter. It was a ridiculous amount of fun, and definitely not suitable for children.

I don’t know that I’m quite ready to listen to my kid read off some of those cards all the time, or in mixed company not related to us, but it was fine. Perfect, really. We were all together having some more adult fun, and she got to be a part of it, because she is, at this point, closer to being an adult than being a child. And in the safety of a vacation rental, surrounded by family, she got to have a (fairly harmless, to my mind) taste of that pending adulthood. I watched her relax and unfold and laugh over and over. If it takes a little bit of questionable humor to bring that out in her, I’m okay with that.

This morning she was back to coloring with her little cousins and playing chase. I’m okay with that, too.