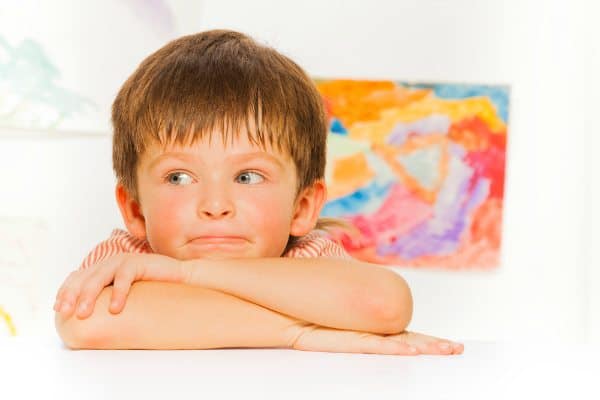 I’m hoping you can give me some advice. I have four kids, and my third is a 4 year-old boy. His birthday is in March, so I assumed he would be the easiest for me as far as entering school. I have two that are September birthdays and another who is a late summer kid. My four year old is great. He is so much different than my other ones. He’s funny and energetic, definitely the family clown. I know a lot can happen in a year, but I don’t know if he will be ready for kindergarten next year. He is pretty immature, has a hard time sitting still and concentrating, and basically just goofs off all the time. I’m sure that describes a lot of 4 year olds.

I just had two years in a row of having a kindergartner and spent a lot of time helping out in the classes. We only do all day around here, and it’s pretty serious business. This past year my daughter had a lot of kids in her class that just weren’t ready and it made me really sad. These kids have to sit and do a lot of work. They are expected to be pretty proficient readers by the end of the year. My little guy knows his alphabet and sounds, and most other things they are expected to know. He doesn’t like to write and can’t really color in the lines. Those aren’t my concerns as much as just the maturity.

What should I be looking for? I will talk to his preschool teachers, but I just don’t know if they will be the best judges. It’s a great school (really the only option since we live in a VERY rural small town). As long as they can do the kindergarten checklist the teachers are happy. I really am fine with holding him back a year, but he will be quite a bit older than some of the kids if we do this. I am a former high school math teacher and my husband in an engineer. We both love and value learning so much. I want him to start off well and for it to be a good experience for him. Any advice would be really appreciated.

This is a really tough, loaded call to make. Like you, I had two kids with early fall birthdays so the kindergarten question was not even up for debate: They missed the September 1st cutoff and I had no interest in pushing them for early admission. So they did another year of preschool despite turning 5 years old just weeks into the school year.

It was 100% the best thing for them. Both of them! My oldest has ADHD and is on the Spectrum (though we had neither of those diagnoses at the time; he was in special education for general developmental delays), and my middle son is “typical.” Which still means he is a high-energy, goofy, easily distracted, wiggly, crazypants of a little boy. They both entered kindergarten closer to their 6th birthdays and the transition was STILL pretty intense. Our kindergarten here is exactly like yours: all day with very high academic expectations. Lots of sitting and concentrating and reading and writing. My older son had the benefit of an IEP that pulled him into a smaller, self-contained classroom; my middle son did not, and probably had more behavior “issues” reported to us as a result.

By the end of the year, however, both underwent a pretty dramatic transformation. They both learned to read and write, developed close friendships and were able to operate within the rules of the classroom and came home with glowing report cards and awards for good behavior.

And now I’ve got my 4 year old, with a June birthday, who is a total unpredictable firecracker-slash-question-mark of a child. Uhhh. Crap.

My son’s preschool teacher says he’s doing just great and will make amazing strides next year, but the school has its own kindergarten program and I know if I ask, she’ll push for him doing the full three-year Montessori Primary program. (He did one year in Toddler and will do two years of Primary before he turns 5.)

My mom pushed my older sister ahead (August birthday) and regretted it.

My son’s kindergarten special education teacher told me, “Nope nope nope. Redshirt a June birthday. Redshirt ANY kid you’re not sure about! It’s just not worth it.”

My husband is pretty much, “Oh my God we’ve been paying for preschool for almost a decade now stop stop with the preschool we need a breather before college noooooooo.” (He was a late June birthday who wasn’t held back and did just fine, FWIW.)

The good news is that you have time to wait and see and avoid making any sort of commitment — you don’t need to notify either school about your intentions for the next fall for quite awhile. And the difference a year makes at this age is pretty mind-blowing. See what happens by the end of this year of preschool and make up your mind then.

That’s pretty much what I’m planning to do this year. Wait and see. It’s too early to be stressing about it and I don’t want to spend this year frantically and constantly “assessing” my youngest in terms of his academic/social skills. He really (REALLY) wants to go to kindergarten and to the same school as his brothers, so for now I admit that’s the plan, unless I spot too many developmental red flags as we near his birthday. I probably won’t commit to a school (preschool or public) until next summer, when I’ll go with my own personal gut feeling as to his readiness.

Anecdotally speaking, I met plenty of little boys with late winter/spring birthdays in my son’s kindergarten classes who did just great. Or who made incredible progress between September and June. (I also, like you, spotted the kids who Were Not Ready Not Even Close That’s A Damn Shame.)  But the reality is that not every family has the luxury of redshirting and paying for another year of preschool, and a good school can balance out an academically rigorous day with an understanding that these are very little children coming in at a wide variety of maturity/socialization levels.

That said, if YOU hold him back, understand that there’s NOTHING wrong with being one of the oldest kids in the class. I stressed about this with my oldest, who had the wonderful trifecta of a September birthday, special needs AND being tall for his age. I worried people would expect him to act older or more mature, when really he was more on par with his younger peers. He entered kindergarten as neither the oldest or tallest kid, thanks to other families making the call to hold their kids back. Your son will be 6 on the first day of school, but I’ll bet he’ll fit in maturity-wise, and probably be one of a few 6 year olds, or kids who turn 6 early in the year. (Plus, hey! In high school he’ll get his driver’s license before anyone else and SCORE MAJOR COOL POINTS.)

But really: You know your son better than anyone, and you have all the right instincts to make this decision. When it’s time to make this decision, that is, which is totally not right now. Give him another year of preschool and let the academic/social stuff fall where it falls by next summer. (Although if your preschool has a full-day option, consider upgrading him to that for at least one semester. We did that with our middle son and it helped a LOT.) And then hey, write me back next June and let me know what you decide, as I’m sure I’ll be less level-headed and more freaking out about our decision.