Twitter Facebook Pin It Email Article
Prev Forgiving Others Is Easy, What About Forgiving Yourself Next The Solid-Foods Jungle 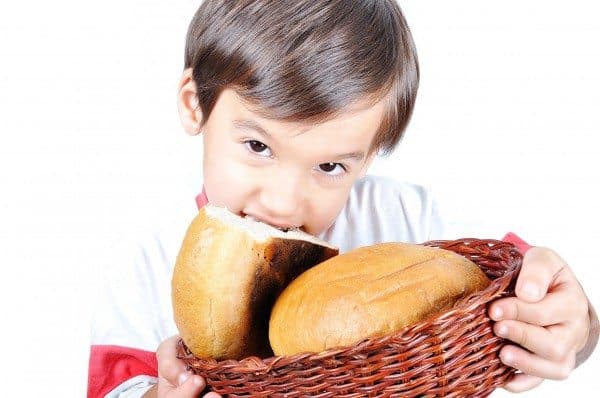 Dining Out With Toddlers

As I was sitting in Ruby Tuesday’s yesterday feeding my 25 month old son lunch from my plate, I figured I should ask you:

At what point does it become frowned upon to bring your child his own food to a restaurant (I usually bring his own milk, and a fruit cup or some applesauce, and some Cheerios)? And to give him pieces of food from your own plate instead of ordering his own?

I mean, I CAN order him some mac and cheese, but he won’t eat all of it, and I am perfectly happy to share whatever I have with him instead of paying four bucks for a box of Kraft Mac and Cheese.

But when do servers start getting salty about that kind of thing?

We eat out as a family quite a bit. And we’ve done it all — brought stuff from home, shared our plates, had the kids split a meal, had everybody order their own individual meal, and taken home plenty of doggy bags.

Personally, I no longer carry snacks and drinks with me to restaurants. (Other than a spare sippy cup for Ezra, just in case the restaurant doesn’t have cups with lids and straws for the kids.) It’d be one thing if I had a child on a special diet, which of course gets you a pass on EVERYTHING else I’ll say in the remainder of this column…but I personally don’t feel comfortable bringing things to restaurants that I know I can order there — like milk or juice, which EVERY restaurant has. We’ve probably made an effort to leave most kiddie/baby staples at home since around Ezra’s second birthday (later for Noah, but more on THAT in a bit).

This is my own weirdness — I’m sure plenty of restaurants and servers do not care in the slightest, but since we take up a table for four, I’m possibly a bit overly-sensitive to what it would look like if only Jason and I order food and then crack out a buffet from the diaper bag. Jason and I both waited tables, and while I don’t ever remember minding the occasional table full of kids, I do remember how much it can sting a server’s take when all their four-tops essentially rack up only two-top checks and then don’t tip any extra for for the fact that you still spent all that time fetching extra napkins and crayons and dipping sauces for the kids, and then the table takes extra-long to bus because of all the crumbs and wrappers and packaging from non-restaurant food gets left behind, thus further dinging your turnover.

At some point, I think we can all agree that it’s RUDE to bring your own food to a restaurant, or sit there and just eat from the bread basket without ordering anything…but no, there’s certainly no SET, universally-agreed-upon age when it goes from okay to not-okay in regards to very little kids. Maybe once they’re out of a high chair and taking up a real seat? Once they start showing signs of independence and decision-making? Once they read a menu? No idea. But I can tell you our current Restaurant Philosophy, which you are of course free to disagree with or decide it’s not applicable to your kid and family.

Noah is five-and-a-half, Ezra is 29 months. My children are old enough, I think, to start listening to their food options and making their own choices about what they’d like to eat at a restaurant. Ezra’s borderline for sure, and we still make the decision for him a lot if he isn’t cooperative, but he’s so independent and aware of what’s going on around him that not having his very own plate became absolutely unacceptable sometime right after his second birthday. At the least, he needs to split something with someone, but he’s such a voracious eater that we don’t do this much anymore. (We would end up ordering ANOTHER kids’ entree mid-meal because he wolfed it all and wanted more. SLOW DOWN, CHILD.)

Plus, Ezra is a very good eater, and I didn’t want to jeopardize that with a constant offering of Cheerios and cheese sticks at meal times, because even the best eater can become a very lazy eater, particularly in the two-year-old phase, and settle into a preferred-food rut. I did the always-have-acceptable-snacks-in-the-bag thing with Noah, who was INSANELY picky, and I regret it, because while it may have made that particular meal out a little easier, we handed over too many battles and lost the war, so to speak. Plus, packaged kiddie convenience food really isn’t THAT much cheaper, and I’m past the point where I’m comfortable bringing in tupperware containers of homemade options for them. (For all the neurotic etiquette reasons mentioned above.) Now, we go to restaurants and you find something you like on the menu. We promise, as parents, not to take the boys someplace where there’s absolutely NOTHING for them, but then it’s their job to choose something acceptable and go from there. (Basically taking the Ellyn Satter feeding philosophy on the road.)

And we’ve found that most places DO have something. For awhile I admit we became overly tied to places with your typical kiddie menu offerings, thanks to Noah’s pickiness, but once he improved at home (I mean, he’s still not great, but still SO MUCH better) we started challenging him a little while dining out and were surprised that hey, we don’t HAVE to go out for pizza for the millionth time. Check the a la carte sides for applesauce or mashed potatoes. Sushi restaurants are usually happy to send out a side of udon noodles. Noah loves the bread stuffed with dried fruit and nuts at Indian restaurants, or a mango lassi and the crunchy papadam crackers. Meanwhile, Ezra eats pretty much anything we put in front of him, and prefers more “adventurous” restaurant offerings over boring old grilled cheese. We still share from our plates, split orders, request the occasional substitution, but we all eat off the menu, with no cheating with the fruit-n-cereal bars I have secretly hidden in the bag for emergencies. (SHHH DON’T TELL THEM.)

Sure, it’s not always going to be the most nutritionally balanced meal of the week, and I HATE when restaurants send out processed options like Kraft or those horrible Smuckers Crustables instead of just whipping together their own mac-n-cheese or pb&j (and it’s usually the last time we’ll go to that particular place). But for us, it’s the experience of eating out as a family that we like. They eat plenty healthy at home. Some might even say obsessively so. One non-organic cup of milk or all-crunchy-carb meal isn’t going to hurt them, though we’re pretty fortunate to live where we do, because there are actually a ton of family-friendly options that are also devoted to organic, local food, and we patronize them whenever possible. The kids may add another $10-$15 onto our bill, but the pleasure we get out of seeing them enjoy their food and color on placemats and talk to us about their day (without us having to get up a million times to fetch a refill or turn off the stove or get another spoon)…and then rapturously behold the dessert menu makes it worth more than it.

Though…yeah. We still go to a LOT of pizza joints. Not gonna pretend otherwise on that one.