Twitter Facebook Pin It Email Article
Prev Ending the Witching Hour(s) Next Baby Monitors: Which One is Right for You and Your Baby? 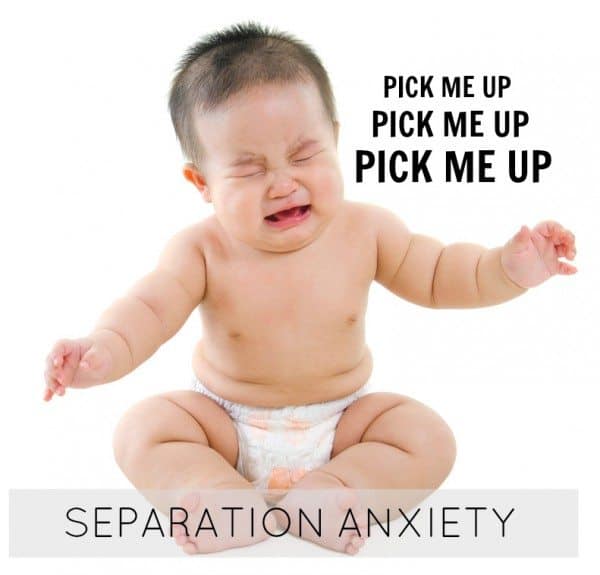 My 8 month old son Isaac has recently started having some pretty serious separation anxiety. Totally normal, just a phase. I’m not worried about him. But yet, I still don’t know what to do, you know?

I first started seeing signs of it when he was a little over six-months old. I went from being home full-time, to nannying two other boys a few days a week at their house. I bring Isaac along, which is such an awesome situation. He gets socialization with other kids and fun new toys to play with. Most days he loves it. But sometimes, especially when he’s tired or doesn’t feel well, he cries for me and wants me to hold him constantly. He might be fine if I’m sitting next to him playing, but if he gets the slightest inkling that I’m getting up, he starts wailing. And he doesn’t stop until I pick him up. I’m dealing with this ok, but I’m wondering if it’s causing more anxiety in other settings.

Just recently he’s doing this same kind of thing whenever anyone else is with us. My mom stayed over for a night last week. If I was holding him and she was a few feet away, he would smile and giggle at her. Come closer or God forbid try to hold him and you would have thought she stuck him with a hot poker! He’s a little better with my husband. Daddy can hold him for a few minutes before the crying starts and he reaches out his arms to me.

When it’s just the two of us he’s fine and content to play by himself as long as he can see me. He also seems to be ok with other people if I’m not there. My husband can take him to the park or to run errands and they have a grand old time. My mom watched him so we could go out to dinner and he calmed down shortly after we left and was mostly in a good mood for the hour or so before she put him to bed. We had a hilarious episode in the grocery store while she was visiting. He started crying when his grandma went to push the cart. So she would take him up and down different aisles and I would sneak up behind the cart and put items in. I was like a grocery store ninja! He was content unless he caught sight of me or heard my voice. Then the tears would start again.

I know this is bothering my husband a lot – it’s one thing to cry for a grandmother you see once a month, but he’s been there every day. And until this started, he was the go-to person to make the baby laugh (he even had him laughing right after getting shots at the doctor!) I hear that this is normal, but how do I respond? Am I spoiling him if I always take him when he cries for me? Or am I teaching him that I’m there for him and he can trust me? Is the nannying maybe causing this to be worse than it otherwise would be? I want him to bond with other people too (with a minimum of hysterical crying!) I’m just not sure the best way to help him get there.

This one almost feels like cheating, because your very first paragraph basically says everything there is to say about separation anxiety at this age. But whatever, my 8-year-old is home sick for the SECOND time this week with his SECOND stomach-related ailment and we’re out of coffee and I’m losing my mind and in no shape to tackle anything super challenging.

So yes. This is a very, very normal phase. And yes, it’s likely that you’re going to be dealing with his anxiety and clinginess for a few more months, at least. Eight to 10 months old is usually prime separation anxiety time, though for babies with severe cases it can last well past their first birthdays.

The thing is to NOT. PUSH. HIM. His fear is very, very real to him. Respect that fear and do whatever it takes to reassure him that you are not going to up and disappear on him or abandon him with someone else. You cannot — I repeat! From the mountaintops! Everybody repeat after me! — CANNOT “spoil” a baby under a year. You can, however, make separation anxiety worse or last longer by trying to force or push the issue.

From a developmental standpoint, your little guy has only just figured out that you, Mama, are a separate person. You, Mama, the person he’s come to depend on above all others for food, warmth, safety and survival. Dada makes him laugh, sure. Grandma is nice, yes. But they are not you, the one he relies on at a very primitive, evolutionary level. And that’s a terrifying realization for someone who can’t walk or talk or do much of anything for himself. It sucks to realize you’re the less-preferable parent or caretaker and it’s ALSO exhausting to be the preferred parent. But this is not anyone’s “fault.” This is not a problem to “fix.” A deeper level of bonding is absolutely in store for your son and his father and grandmother, but it’s not going to happen by you handing him over to someone and then fleeing the room, or “hiding” from him the minute he’s not looking. All that’s telling him is that HOLY CRAP I WAS RIGHT ALL MY FEARS ARE COMING TRUUUUEEEE.

And then you come back and instead of his baby-brain making the connection that “Oh. I get it. She leaves and then comes BACK,” it’s more likely that he’ll be more afraid, and thus more determined not to let you out of his sight. Or let anyone else hold him and potentially take him away from you. (And that can then lead to the super-fun-times known as “nighttime separation anxiety,” where your baby refuses to sleep unless you’re there in the room, and wakes himself up periodically to “check.” UGH.)

It’s GREAT that he is okay going places with other people, or being babysat by Grandma. SO GREAT. Some babies with severe separation anxiety can’t handle that, and will scream and cry the ENTIRE time instead of calming down shortly after you leave. My kids have all occasionally put on a big wailing/clinging show at the door when I’m about to go anywhere and leave them with Dad/Grandma/babysitter, but then it all stops shortly after I leave and they can be distracted by something else. I think this is a very healthy level of separation anxiety — enough to show their bond to you, but not so much to be a huge PITA and essentially render you their prisoner.

I wouldn’t point some big blame-y finger on your nannying gig, by the way, but I would recommend that you be very mindful that his routine isn’t being disrupted too badly there, or that you aren’t constantly triggering the anxiety by leaving him behind in rooms or anything. Does he bring any special transitional objects from home with him? Some favorite toy or lovey? (It’s okay if he doesn’t. Some kids have things like that, others don’t. So don’t feel like you need to try to force him to have one, but it might not hurt to make sure you’re bring a few familiar things with you each day.)

Do you have a good baby carrier you could keep him in when you’re trying to move around the house? I’d say get yourself an Ergo or mei tai STAT and basically wear him around whenever possible. (Perfect for the grocery store, too, by the way!) Learn to master both the front and back-carry positions and it will make this phase so much easier on you, while giving him the security and closeness he’s craving.

Carrying him on your back is especially awesome, by the way: It’s super-comfortable, gives you full use of your arms and hands, AND it will help your son get used to the idea of being with you, against you, all warm and safe…while not needing to directly see your face. Pretty soon, I bet, he’ll be happy riding on Daddy’s back as well, and not necessarily be whipping his head around to make sure Mama is in his line of sight. He’s safe, he feels good, and he’s getting a very soothing ride and interesting look at the world.

Keep reminding Dad and Grandma to not take any of this personally, because it’s not personal. This phase has absolutely no bearing on your son’s ability to bond with other people. He’s just…afraid right now. You aren’t going to make anything better by attempting to teach an 8-month-old that his fear is irrational and he just needs to man up and get over it, you know? The babysitting and Daddy/Son outings are all excellent, so keep doing those as long as he’s calming down and being generally okay with them. As long as they aren’t stressing him out, they will probably help a lot.

But don’t feel bad telling someone your son doesn’t know that you’re sorry, he’s just very shy and going through some separation anxiety, so it’s best if you keep him in your arms while they get to know each other, okay? People can be so pushy about wanting to hold babies and then get all bent out of shape and blame-y when the baby is all, HELL NO. That’s their problem. Not yours, and most definitely NOT your (totally developmentally appropriate) baby’s problem.