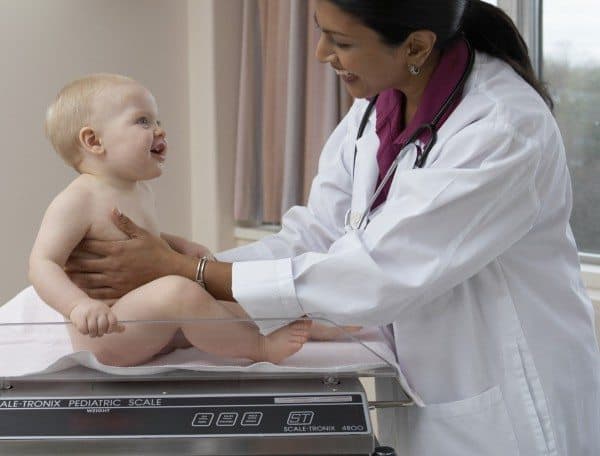 Is My Baby Eating Enough?

My beautiful, almost too perfect baby boy has always been long and thin. The problem is that at his nine month check-up we found out that his weight has dropped off, and he has only gained a pound and a half within three months (going from the 25% to 5% for his age group). There hasn’t been a difference in eating or general behavior in him, aside from his last feeding of the day where he is distracted (wants to switch positions, constantly stops nursing to look around, etc) and eats for less time than normal. He is exclusively breastfed (four times a day), and is perfectly happy about solid foods, eating about an ounce or two of fruits/veggies/cereal with some table food at mealtimes. The pediatrician suggested giving my baby 4 oz. of juice every day, and he said that it would fix the weight issues. I think this is too much juice for him. Whenever he has juice (watered down or pure) he is noticeably “wired” and I just don’t feel comfortable with his advice.

Already, I’m going to switch pediatricians because of this and other issues that I have with his philosophies. But aside from this, I’m not sure what to do to determine 1) why baby’s weight dropped off in the first place? and 2) how to bring it up to where it needs to be? Since his main source of nutrition is my breastmilk, could it be a breastfeeding issue? Should we see a lactation consult to ensure that he is eating enough (or will she just think I’m crazy because OMG he is nine months and I should have all of this figured out already!)? Or is this just a matter of stuffing as many calories as possible into my little munchkin I’m still relatively new at this, and I just want to make sure that my little guy grows up as healthy as possible.

Step One: Find a new pediatrician.

Step Two: Take your son and his growth chart to new pediatrician.

I am SO not qualified to answer this question, because a baby can drop off the weight percentiles for a wide variety of reasons. Some are perfectly innocent: increased physical activity (like learning to crawl or walk) or growth spurts. Some are…not so much, but only a doctor can make a real educated guess or decision about the cause.

That said, I completely agree with your assessment of your doctor’s recommendation of juice. That’s a really weird suggestion, because juice is more or less empty calories with a lot of sugar. Adding few ounces of formula would make more sense to me, for a goal of weight gain. So yeah. Time for a new doctor and a second opinion.

In the meantime, let’s examine your baby’s diet. There really really really isn’t a set “standard” for the “how much solid food should my baby eat?” at every age. You want your baby to eat how much his body tells him he needs to eat. You DON’T want to push “just one more bite” on him, ever. Some babies will eat multiple jars of food at one meal while other babies can barely seem to finish one or two ice-cube-sized portions. Always let your baby set the pace.

But if you’re worried about whether he’s getting enough nutrition, I’d say look at his solid-food intake before the breastmilk portion. Especially since he’s going through that pesky “super distracted” phase of nursing. A LOT of babies go through this, and many of them outgrow it. For others [like my Ezra] it CAN be a precursor to self-weaning [sob]. I’m sure your milk is just fine. The distraction — and this includes not wanting to take breaks from exploring to sit in a high chair — is a normal developmental stage where he’s figuring out that there are things in the world even more interesting than boobs.

(Oh! And that’s another thing. So your baby is low on the weight percentiles. Is he more or less meeting most of his developmental milestones? As in, can you look at a milestone chart for a 9-month-old and not be gripped with bone-shaking panic because he’s not doing any of that stuff? Did his height and head size remain more or less where they’ve always been? If so, I’d say he’s probably just fine. He’s just skinny.)

You didn’t give a ton of specifics about his solid food diet, other than “about an ounce or two of fruits/veggies/cereal with some table food at mealtimes.” While there is no “right” or “set” amount a nine-month-old should eat, I will admit that’s a bit on the low end. Have you thickened the consistency of his foods yet? Tried some basic baby soups or stews with a little protein in them? Offered any meats yet? Will he eat yogurt? If not, you can definitely start expanding his food horizons at nine months beyond pureed peas, pears and oatmeal. Here’s a sample menu for 8-12 month old babies (scroll to the bottom) that I used for my boys (who were both skinny babies). Noah rarely finished everything I offered; Ezra usually would, but the quantity really isn’t the point. The variety is.

At this point, aim for three “meals” a day and one or two small snacks (after naptimes). Nurse him first, then offer a grain, a fruit/vegetable and either a dairy or meat/meat-alternative protein. If your baby will only sit in the high chair for a limited amount of time, mix as many of these elements together as possible. Yogurt mixed with cereal, tofu and avocado, etc. Noah loved chicken pureed with pears; Ezra adored lamb stew with mashed lentils. Pasta pulsed once or twice in the blender with veggies is AWESOME. That way you’re packing maximum punch into each spoonful. And don’t forget the finger food! It sounds like your son is still mostly spoon-feeding (I think?), which is fine, but always offer some self-feeding options. They might not serve the weight-gain purpose right now (and might all end up on his lap or the floor), but they are so very important down the road when he might not be so willing to let you feed him. Diced veggies, bites of cheese, teensy bits of chicken, different pasta shapes — give him a wide variety of textures to touch and taste. Again: don’t force or cajole him to eat after he’s indicated he’s done.

Babies won’t let themselves starve. They won’t go hungry without letting you know about it. Provided there isn’t an underlying medical reason why your son’s weight has dropped (and again, if height/head circumference are fine, as are most of his developmental milestones, there probably isn’t), he’s FINE. He’s probably just going through that active, distracted phase that will last from now until college.

(And if it makes you feel any better — Noah, the child who ate nothing and still eats nothing, has skewed anywhere from 30th to 50th percentiles for weight. Ezra the Life Is One Big All You Can Eat Vegas Buffet child, fell into the SEVENTH PERCENTILE at his 18-month visit.)