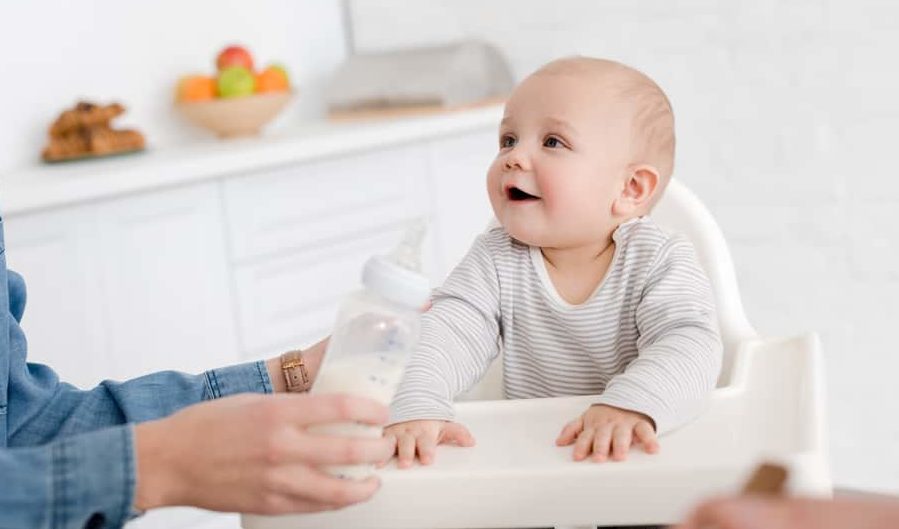 Wow, I have no idea what I am doing. I was so excited to do Baby-Led Weaning with my baby; she was so excited to try food! Then we gave her her first taste of banana at 6 months and lo, the world BETRAYED HER. So we did purees for a while, because that’s what she would eat, along with lots of chances to experiment and try other solids. Lately it seems like we have turned a corner and she is really enjoying the foods we are eating and giving her–she’s actually interacting with the foods and eating them with gusto. She even enjoys banana now; I’m taking a French approach of, “she doesn’t like it YET” and keep giving her things.

She’s drinking less from her bottles at daycare, and I’ve gone from sending three 5 oz bottles (breastmilk) to three 3 oz bottles because that’s what she’s eating. My supply has also TANKED and I can’t ever pump more than 2 oz (I’ve tried everything in that regard, seriously).

She’s always nursed before bed (I know, I know, but she went down super fast and she would sleep through the night).

Lately, she has been rejecting the pre-bedtime nursing session, and I’ve been rocking her to sleep. But now she’s waking at 2am to eat, which I do not love. She’s a VERY inconsistent and stubborn nap-refuser, so some days it really is exhaustion. Bedtime is 7, and she would love to sleep until 7 or 8 am, but I work and need her up around 6.

Overall, I just feel like I don’t know what her feeding schedule should be and how to work solids into the new normal! Is it bad that she’s refusing nursing sessions because she’s full from solids? She’s not one yet, so I think she should still be getting most of her nutrients from milk?

A, who doesn’t know how to feed her baby.

Solid Foods and Feeding Advice for Under One-Year-Olds

Okay, let’s start with the solid foods. You are doing fine! Purees are fine! A slow approach to finger foods is fine! Some food rejection is fine, and downright inevitable! Keep introducing and re-introducing, rinse and repeat.

What you DON’T want to do with solids, at least before her first birthday, is offer them BEFORE or in place of breastmilk or formula. Because your last sentence is correct: Before 12 months, those should be a baby’s primary source of nutrition. So whatever solid-food schedule she’s on — be it breakfast/lunch/dinner or more free-grazing/snack-oriented — make sure to always offer her the breast or a bottle first. Once she’s had that, she’s free to pack in all the solids she cares to eat.

(And BTW, while purees are often thought of as “outside” the baby-led weaning regimen, the same underlying principles can and do apply! Don’t force her to finish a full serving or an entire package of baby food if she’s showing signs of disinterest or being full. Once she turns her face away from the spoon, follow her cue and let the meal end! If you’re still eating or need her to stay in her highchair longer for any reason, this is a good time to hand her the spoon to play and practice with. If she quickly throws it on the ground, that’s fine, just put it away and don’t return it lest you inadvertently teach her how to play the SUPER FUN THROWING THINGS AND WATCHING MAMA RETRIEVE THEM TWO DOZEN TIMES game. Same with finger foods — if she throws them, they are gone vs. you perpetually re-stocking her tray with a magical endless supply of flingy things.)

Milk Consumption for Under 12 Months

Now, let’s get to the milk issue. On the one hand, it’s really, really common to see a big supply drop around this age, as their intake of solids increases. I’m not surprised and I 100% feel you on the doing everything under the sun to increase your pumping output to no avail. (Oh lord, do I feel you.) On the other hand, a 10-month-old baby should still be drinking somewhere in the range of 16 to 24 ounces of breastmilk or formula per day. (“Typically” spread out across three to four feedings of seven to eight ounces each.) So the fact that she’s going almost all day on three teeny-tiny 3oz bottles while also rejecting a bedtime feed is a little…hmmmmmm-inducing.

But! If she’s still getting a really robust nursing session in the morning and again right after getting home from daycare, then those would likely get her from that 9oz to something closer to the 16oz range. (Remember that your baby will ALWAYS get more milk directly from your breast than your pump will!) If that’s the case, you’re doing just fine, really.

But if she’s not nursing beyond bedtime and only getting additional 9oz of breastmilk during the day, I would personally consider supplementing with a little formula. It’s likely that she has to work harder to get breastmilk now that your supply has dipped and is just too tired to bother at bedtime! If you had more pumped milk to spare, I’d suggest doing a bottle experiment with a high-flow nipple and see how much she drinks. (And see if a more complete feed at bedtime will eliminate that annoying 2 a.m. waking, as it theoretically should.) But if you don’t, maybe try some formula in the 5-6 oz range and see how she does with that. Then another supplemental bottle in the morning, before any breakfast-type solid food. (Unless there’s a productive morning nursing session! You didn’t mention one, but I won’t assume that there isn’t one.)

Ask for Feeding Guidance from your Pediatrician

But talk to your pediatrician! Some doctors will recommend switching right to cow’s milk around this age, which is admittedly MUCH easier and cheaper. Others prefer to hold off until the magical one-year mark. And others make the call based on how varied and reliable a baby’s solid-food intake is. (My three children saw doctors from all three schools of thought, so we had one drinking milk at 10 months, and two who waited until 12 months. Everybody lived and everything was fine.) (And all three were breastfed with as-needed formula supplementing thanks to supply or pumping issues on my part.)

Either way, your pediatrician should be an excellent source of commonsense food/meal-scheduling/nutrition-intake advice. So if after 10 months you still genuinely feel like you’re flailing with no idea what to do or without non-judgey, knowledgeable guidance from your pediatrician or nursing staff, you might want to think about looking for a new practice that helps new parents out with the practical life stuff vs. only medical concerns.