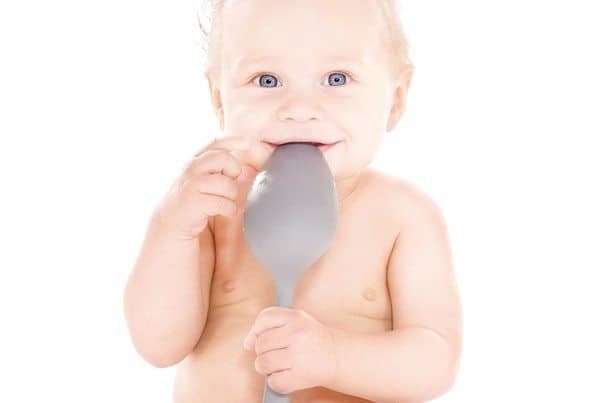 How to Deal With Unsolicited Advice About Your “Big” Baby

Help! As a fellow large-baby-birther, I need a bit of perspective.

I’m a first time mom to what I have to say is quite possibly the world’s most adorable 10 week old baby girl. At birth, she came in at a hefty 9lb 10oz, 21.5in long. My husband took a picture of her right after they plopped her into the little baby scale in the hospital room and she just takes up the whole thing. At her 1 month appointment she was up to 12lbs and 25.5in. Now, by 10 weeks, she’s easily 14-15lbs and wearing 6mo footed pjs that aren’t even big on her, just a little roomy.

Obviously, I think she’s perfect. The rest of the world, however, seems to think I’m overfeeding her, setting her up for lifelong obesity. I legit had someone tell me that large infants lead to obese children. She can’t even crawl yet! How can you have an “obese” 10 week old? Another suggested adding cereal to her bottles so she’s eating less often. She had this whole theory of adding 2 months if they’re over a certain weight (so essentially, treat her like a 4month old). She was just a cute little old lady, but still! I’ve brushed it off as long as possible, but now I need some reassurance that doesn’t come from the depths of Google – can you really overfeed an infant?

Since I’ve started work again and she’s in daycare, she gets about 75/25 breastmilk to formula, depending on the day. The first feed of the day is a little up in the air depending on when she wakes up for the previous feed (she might eat at home or she might skip it altogether), but otherwise she gets 4 bottles at daycare, eats twice more in the evening and then once again in the middle of the night. For a bottle, she’ll easily toss back 5-6oz. When I pump at work, I get 5-5.5oz, so that seems pretty on par with the bottle. I would think if she were truly overfed, she’d have the good sense to puke it back up, but maybe I’m wrong.

I realize I’m being a little irrational (again, babies? obese? what?) but I guess when enough people say it, it starts to stick in your head. I kind of remember you saying that Noah was a larger baby – did you get this same kind of “advice”? The whole top of the percentile chart thing should all even out as she gets a little older, right? Lastly, why can’t people just be nice to new moms and their babies?? Sheesh!

Thanks for the help!!

I’m sitting here making a Minion-from-Despicable-Me face and noise — WHAAAAAAT?  But then, when I think about it, yeeeeeahhh I do have some similar memories from after Noah was born (at a whopping 9 pounds, 15 ounces), of getting weird comments and (BAD AND WRONG) assvice from both well-meaning clueless people and straight-up concern trolls. So let’s just cut through the crap, because it’s Friday and we all have better things to do with our time than give this assvice any more headspace than it deserves. (Which is none.)

No. Your daughter is not “obese.” No, high birth weights are not a harbinger of doom for obesity later in life.

No, you cannot overfeed an infant. Infants aren’t like us entire-bag-o-chips eating adults  — they are born with the instinct to self-regulate their intake. Yes, your daughter’s feeding schedule and intake is perfectly appropriate. And no, NO, you should absolutely NOT be considering giving a 10-week-old baby cereal to make her “eat less.”

(Yes, we’ve all seen the viral outliers of BIGGEST TODDLER ON EARTH stories, but if you read the details you will see that none of those children got there naturally via breastmilk or formula, but either underlying health issues, or from parents who sadly, had absolutely no clue how to feed their children and fed them diets of highly processed junk food and sugary drinks from a ridiculously young age.)

You know this, I think. You just need to realize you know this. It’s really part of the first-time mom experience — you slowly work on growing a thicker skin made entirely out of self-confidence cells.

Nice little old ladies in the grocery store, by the way, should be universally treated with a polite smile and a nod, and nothing more. Believe me, if it wasn’t your daughter’s adorable chub they were commenting on, it would be something else. I got scolded by complete strangers for having my babies outside of the house at all, for not having them wear hats at all times, for wearing them in a sling where they “couldn’t breathe.” Whatever, people. Deal with it.

My own mother once made an offhand comment to me about my Giant Baby re: worries that people would mistake him for an older child and “expect more from him” as he got older. For some reason that wedged itself into my brain, which: GREAT, considering my Giant Baby ended up having developmental delays that did put his speech and behavior below his typical peers. So I totally understand how these comments can get to you, even as I spout advice, from almost nine years later to, simply Shake It Off.

But really. SHE’S PERFECT. Some babies are big! Some are small! Some are skinny and some are chubby and some go back and forth several times, in between growth spurts and gross motor milestones.

My 9lb, 15oz baby is now an almost-9-year-old who is lean and muscular and just a bit taller than the kids in his class — but then again, his late September birthday means he’s older than most of them. He’s actually pretty darn average these days. My 7lb, 7oz baby is now an almost-6-year-old who, despite being crazy chubby as an infant, leaned out to be my tiny/skinny one. But then had a COLOSSAL growth spurt last year and entered kindergarten this year positively TOWERING over the other kids his age. And my smallest baby — 7lb, 2oz  — is currently on track to be my biggest, tallest, strongest kid yet. (PULL UPS. MY TODDLER DOES PULL UPS.)

You seriously have no idea what their bodies will do — but as long as you try to nourish and love and accept those bodies to the very best of your ability, and you’ll both be just fine.