Twitter Facebook Pin It Email Article
Prev Baby Bathtubs: The Yay to the Nay Next How Often Do Kids Need a Bath? 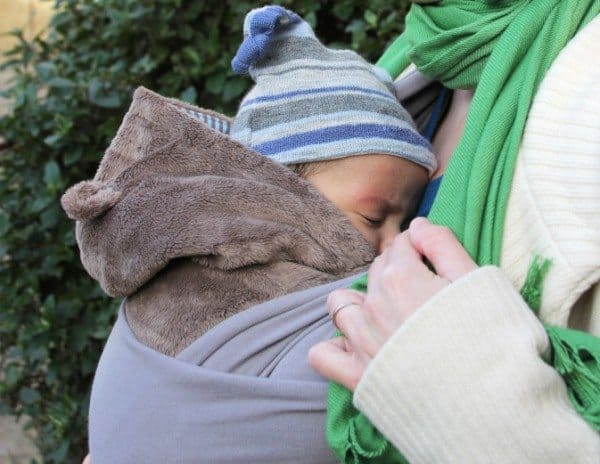 So I read your posts about happy spitters. And I have one. Oh boy do I have one. He’s 2 months old now and we’re on about 5 costume changes a day. And that’s with me being kind of negligent about amounts of barf on shirts (s’fine, right?). I would love love love to use my baby carrier instead of having to haul my stupid stroller up my apartment steps every time I want to get more milk but HE BARFS ON THE INSIDE OF MY SHIRT!!! Every. Single. Time. Someone gave me a Boba wrap at my baby shower and I’m hesitant to buy anything else until I get this barf thing figured out. But seriously? Let’s picture me struggling out of a Boba wrap with barf all over me and him and it. Yeah, fun times.

What did you do? Did you try and carry your happy spitter (I’d look up which one of your guys it was but I’m hella tired right now) or did you just not bother? Or did you have some magic solution?

Greetings, fellow barf-crusted mama! For the record, your hair smells fine. It’s totally not noticeable. Much.

Yes, I DID carry my happy spitter in a variety of carriers — I experimented with some specifically because I was hoping maybe the barf would stop if I found some magical position for him. Lying down! Fetal! Upright! On my chest, on my back! On a train, in the rain!

Yeah, whatever. Ike would casually yak all over me no matter what position I had him in.

However! I still actually preferred using baby carriers, since I always found strollers more trouble than they were worth (at least when your baby is the size and heft of a family-size meatloaf) and using a carrier instead of simply carrying Ike freeform helped me…ah…predict the inevitable spew’s direction and plan accordingly. Although my “plan” wasn’t elaborate or anything earth-shattering:

3) Machine-washable carriers only, with an extra one in the car. With your extra shirts.

Soooooo many burp cloths, you guys. Good, utilitarian (read: not cute and decorative) burp cloths. Dundee, Gerber, the cheap white prefold diapers that you would probably NEVER want to actually use as prefold diapers, etc. I would put one of them flat against my chest and then put Ike in his mei-tai carrier. Obviously you want to be very mindful of the cloth possibly being loose or shifting, but you ALWAYS want to be mindful of your baby while wearing him. Babywearing is not set-it-and-forget-it, like tossing food in the Crock Pot. Check his head position often and make sure his nose and mouth aren’t being blocked by ANYTHING, be it your shirt or carrier fabric or bib, etc. (Though remember that babies’ faces are ingeniously designed to breathe while smushed up against your boob anyway, so don’t like, be panicking and poking his nostrils every 30 seconds. Happy medium!)

(For the record, no, I don’t like the face-out baby carriers. I used pouch slings and face-in mei-tais. [A classic fabric/tie version and then later the Ergo, once Ike was a bit more substantial in size.] Having your baby facing out is not great for his hip joints, and the curled-up-against-your-chest is a more natural/comfortable position for tiny ones. So I was the crazy person who chose vomit down my cleavage over vomit down the outside of a Bjorn. Which would probably still find a way to land on your shoes, so whatever.)

If you like your Boba Wrap, I’d suggest investing in a second one, or perhaps some other (MACHINE WASHABLE) baby carrier to have as a back-up. Keep it in the car, along with an extra shirt for yourself. (My pediatrician — who also had a happy spitter — told me she used to wake up and immediately put on at least two or three shirts right from the start. Then she’d strip them off as needed.) I used to keep a bottle of Febreze around as well to use on any burp cloths or clothing that got soiled while we were out, just to keep the car and my diaper bag from smelling like sour milk all the time. A wetbag is a good call too, even if you aren’t cloth diapering, just to seal up the grossness. If you use a baby carrier with any kind of shoulder strap, buy some removable “sucking pads” for it. Your baby probably won’t use them for a few more months, but they are SUPER great at protecting the straps from those times your baby turns his head to the side and yaks.

Finally, at home, start trying to time the barfing and see if there’s any sort of pattern. Use the stopwatch function on your phone, if it has one. Feed the baby and set it. Ike would yak a little with his burps, but the “worst” of it usually came about 10-15 minutes later. Right when I started to put my guard (and my extra burp cloth) down. Try to NOT be wearing your baby during this critical digestive period. Otherwise (I would nurse while babywearing a lot, so it was hard to avoid), try to make sure you’ve got burp cloths ready and IN PLACE over your chest.

And remember, you just had a baby. They barf. On you. We’ve all been there, out in public with vomit in our cleavage or white milky streaks running down the back of our shirts. We’re not judging. And if anyone does judge, just hand them your freshly-fed baby after a vigorous tummy tickle. WHOMP WHOMP.