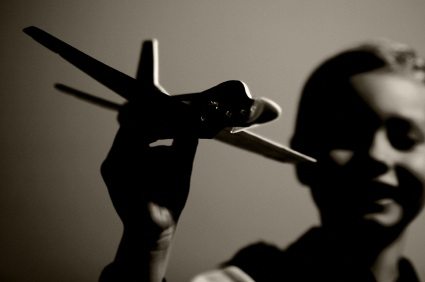 A Survivor’s Guide to Air Travel With Multiple Young Children 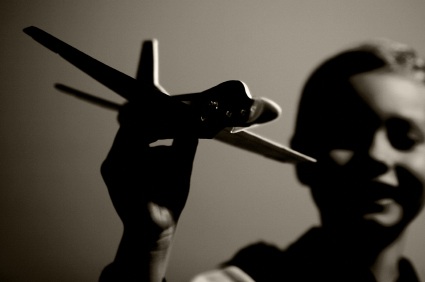 I stepped off a plane less than 12 hours ago. I stepped off of that plane with two small children in tow, successfully resisting the temptation to abandon their tushies somewhere along the way. There was that nice family in the terminal in Atlanta. Or that comfy pile of unclaimed luggage in customs.

Needless to say, I am EXHAUSTED. And in no shape for confronting your Major Life Problems or Assorted Hair-Related Crises.

So instead, I present a list of the stuff that came in super-handy during our little jaunt across international waters.

1. The Traveling Toddler Car Seat Travel Accessory
We looked at dozens of uber-clever “solutions” for traveling with our car seat. Stroller frames, zippered covers, backpack carriers, etc. We had two basic needs: a) We were not bringing a separate stroller, and wanted to use the car seat as airport transport. And most importantly, b) We were bringing a LOT OF STUFF ALREADY, and wanted something lightweight and easy to assemble and disassemble at security lines and gates. In the end, we went with the most basic-looking option: a strong, adjustable strap that attaches any LATCH-compatible car seat to any small rolling carry-on suitcase. Put the kid in the seat and roll them merrily along. Done.

I was nervous about our choice (I mean, come on, $14.99? You’ll pay more than that for an airport sandwich). But oh, this thing worked brilliantly. We adjusted it at home, on a trial run (which I highly recommend), then simply snapped it all together curbside at the airport in a matter of minutes. Our intrepid Samsonite wheelie bag (in which we’d packed our spare “massive climate-change” wardrobe) became a stroller. When we were able to score a seat for Ezra (he was an “infant in arms” but on two out of four planes we got a seat for him), we simply wheeled him down the plane aisles, miraculously clearing the seats even in his massive Britax. He slept in the seat through BOTH of those flights. When he had to sit on our lap, we gate-checked the seat and went on with just the suitcase, and the Travel Accessory stayed hooked onto the seat.

Multiple times we were approached by highly jealous parents who had checked their car seats, only to be confronted with a half-empty flight and no suitable child restraint, or who were carrying seats backpack-style in addition to wrangling a toddler. One pregnant woman got on her iPhone to add it to her baby registry right then and there. Multiple thumbs up!

2) Ergo Carrier
This was my lifesaver on my last trip — solo, with just the baby — and lo and behold, it came in just as handy this time. Once we arrived in Jamaica, gate-checked items were not returned to until we cleared customs and got everything else at baggage claim. This meant parents had to navigate the maze of an airport and a MASSIVE line at Immigration without their strollers or car seats or restraints or aaaaeeeeiiiii. Totally not a situation we planned for…but I’d tossed the Ergo into a carry-on at the last minute, unsure of whether I’d need it or not, but OHTHANKGOD is all I can say.

3) Sony Children’s Headphones
Noah was EASY to please on the flight. My laptop and a DVD kept him happy. Throw in a bag of mini-pretzels and a cup of apple juice and he thought air travel was pretty much the greatest thing since the school bus. We’ve had problems, though, with headphones in the past. Ear buds don’t stay in and regular adult-sized ones slide off. These headphones say they are sized for 8 years and up but they fit Noah (4 years) perfectly. His head does trend toward the upper end of the percentile chart, so if you’ve got yourself a 95th percentile noggin, you could likely use these well before age 8 as well. (We ONLY use them for travel…regular use of headphones for little kids is not a good thing, obviously.)

4) NotToys
Ezra, on the other hand… OY VEY, HE WAS A CHALLENGE. I deeply regretted our decision to save money and not buy him a dedicated seat. (We paid a percentage of our tickets because it was international travel, and kind of misunderstood the ticketing agent, who made it sound like it was simply a discounted seat, but still a seat. IT WAS NOT A SEAT.) When he was in a seat, strapped into the Britax, he was a dream. He ate a snack, drank some juice, charmed passerbys in the aisle, fell asleep. When he was on our laps, he was a nightmare. A squirmy, whiny, shrieky nightmare who wanted to climb and kick and throw Cheerios at the people in front of us. (If you’re traveling coach with a toddler on your lap, here’s a tip: REQUEST BULKHEAD SEATING. It sucks having to stow your stuff overhead, but it is waaaaaay better to only have a wall in front of you for your child to torture.) We’d brought a zillion and one toys — nice toys, cheap toys, new toys, old toys. Noah didn’t need them, and Ezra didn’t want them. Unless he could throw them. Things he did like: plastic cups, beverage stirrers, airsickness bags, laminated emergency instructions, tearing pages out of the SkyMall catalog.

In summary: Buy a seat, ask the flight attendants for any free crap they can spare, use the space for toys in your carry-on for headache and anti-anxiety medication instead.

5) Chewy snacks
The ear thing. Oh, the ear thing! We had sippy cups ready to go for take-off, hoping to get the boys drinking and swallowing at the right time…only we misjudged the timing EVERY. TIME. and the cups were empty by the time the actual ear-popping started. Ezra would suck his thumb if given his lovey, but on our flights out they both complained of earaches at various points. On the way back we inadvertently solved the problem with a big bag of juicy, chewy raisins. Easy to dole out as needed, encouraged lots of chewing and frequent swallowing, healthier than candy or gum, AND nothing you’ll need to arrange after the security folks make you dump out your sippy cup contents. (This only happened in the States. I’ve been allowed to bring milk and formula along, but was told to dump their water this time. Jamaica had no problem allowing children to bring their juice along.)

6) Overpriced alcohol.
Yeah. You know what? When that beverage cart comes along and you’ve successfully gotten both children through security and elevators and trams and interminable waits and onto a plane and somewhat happy and quiet and maybe even asleep and contented? Spring for the $5 beer or $7 cocktail. YOU’VE EARNED IT.