Twitter Facebook Pin It Email Article
Prev School Locker Decoration Mania Trend Next Bouncers For Your Baby: What Should You Buy? 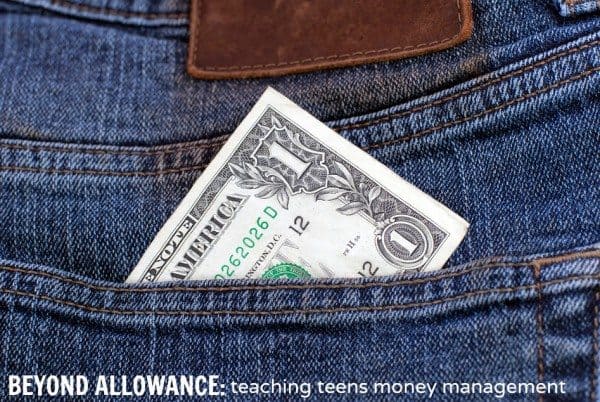 I happen to believe in giving kids an allowance. Not everyone does, I know—and I’m certainly not saying my way of thinking is the only right way—but to my mind, allowance done right functions as the training wheels of money management. The goal is for our children to grow up and become productive adults with jobs, right? I think there’s inherent value in starting them from a very early age with basic money concepts and a steady (if small) stream of income on which to practice. If you do this from a young age, by the time the kids are teenagers, you can seamlessly help them grow their relationship with financial matters as they prepare to (*gulp*) leave the nest.

Of course, everyone is different and some people are natural savers and some are natural spenders. If parenting (and parenting teens, in particular) has taught me anything, it’s that there is no foolproof way to “get it right” when it comes to kids. You do what you can and hope it works. (Clearly I missed my calling as a motivational speaker.) And if you haven’t started yet, it’s never too late. I promise your kid(s) will be excited if you start offering them money. Let’s break it down:

Pick Your Payday And Allowance Rate

In our house, allowance is paid on Sundays, at a rate of $.50/year of age. Half of you are now thinking that this is not nearly enough money, and the other half think it’s way too much money. It works for us, and the key here is that it removes any angling, either in terms of amount or day. On your birthday, you get a raise. Hooray! The rate is otherwise non-negotiable. On Sunday you get the next week’s allowance, but the Bank of Mom doesn’t offer loans. We’ve been doing it this way forever, which means my kids know better than to ask for an advance or argue about how much they get. Also, in our house, allowance is not tied to chores. You do chores because you’re part of the family, not because you’re getting paid.

You’re trying to foster your child’s developing relationship with money, and that means achieving a balance between rules and freedom. I could give my kids less money and tell them they’re free to do whatever they want with all of it, but part of what I want them to be doing is thinking about where there money goes and how. This is why, in our family, a set percentage of allowance is set aside for charity, another percentage is set aside for the savings account, and the remaining money the kids can blow on whatever they want and I’m not allowed to say a word. (It should go without saying, here, that these guidelines need to match up with your own observable money-handling if you don’t want an argument.) And remember how I said I don’t pay for chores? Actually, I do pay for exceptional chores. So on the rare occasion when a child bemoans their lack of funding, perhaps a project-for-pay will be offered. (The flip side is that I may also charge you a quarter for leaving the lights on. Consider yourself warned.)

When my kids were little, we used 3-compartment plastic containers and actual cash to deal with their allowance. It worked… sort of… but as they grew and the money increased and the percentages got more complicated (and, possibly, children may have been known to move money around in sections or take it out and lose it…), we abandoned actual cash. I, personally, use a credit card for everything possible (paying it off every month) and do all of my banking online, so the transition to online management made perfect sense for us. Now I share a Google spreadsheet with each teen where we can do their “banking:” every Sunday I put in the weekly payment, and a formula automatically removes the charity and savings amounts and keeps a running total of everything. When the savings total exceeds $10 or so, I transfer those funds to their bank accounts. And when the kids choose to donate their charity money someplace that speaks to me, I match their donation. We can track all of that in the spreadsheet, as well as mark withdrawals as needed.

Adjust Allowance Handling As They Get Older

My son very rarely wants cash; he’s not often in situations where he’d need it, and like his mom, he prefers to research and make most of his purchases online. He also likes to come grocery shopping with me and pick out a pack of gum. (1950 called, and they want my child back.) My daughter, on the other hand, is much more likely to want to have money for the vending machines at school or to go out with friends for pizza and such. We discuss what parents cover and what we don’t (if we go for ice cream as a family, sure, we pay for that; go with friends, and that’s your money), and I’ll grant cash withdrawals and mark them on the spreadsheet. (But if that money gets lost, oh well.) I used to provide birthday presents for their friends, for example, but at this age, they purchase those items themselves. My daughter pays a portion of her cell phone bill, too.

Talk About Your Money

I grew up in a household where money was, for the most part, not discussed. This doesn’t do kids any favors. My teens know how mortgages work, and they know because the last time we refinanced, it ended up being that night’s dinner conversation. Another night was devoted to tax brackets and the difference between my husband’s paychecks having the tax money already removed and my freelance paychecks where I have to figure it out and pay the government their cut quarterly. They know that my husband prefers to pay in cash and that I prefer using my credit card, but they also know that we never, ever carry a credit card balance. We talk about saving up for larger purchases and the difference between “needs” and “wants” and how much we typically spend on groceries. As one of the kids remarked one day, “Geez, stuff is expensive.” Yes, it is. Better to find out now, before you have to pay your own rent!

Talk About Their Money

Be careful here; letting the kids make their own spending decisions means you may disagree with their choices, but get heavy-handed with disapproval and they’ll stop listening. Let decisions go without comment in the moment, if possible. After the fact, an off-handed question about whether they’re happy with their purchase decision might spark a conversation (or at least some reflection). It’s possible I’ve remarked when a child didn’t have enough money for something, to gently wonder if future spending should be more mindful. Ahem. Look, it’s good and healthy to want something and have to wait and save up to get it. Plus, a teenager with a a hankering for a pricy item means my kitchen floor is really clean for a while. (No, I don’t feel guilty about this.)

Still, for all my efforts, I can say I have one “saver” and one “spender,” so I don’t know how much influence I wield. Darn kids and their own unique personalities!