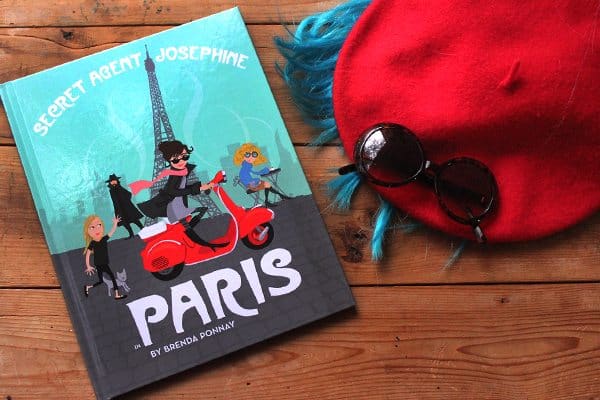 My fellow long-time Alpha Mom contributor Brenda Ponnay published a children’s book, you guys! You probably know her best for her adorable crafts and printables (not to mention saving y’all’s butts every Halloween with her super-easy DIY kids’ costumes), and she also created all the wonderful illustrations that accompany each week of my Zero to Forty pregnancy calendar. So when I was asked to write a little something extra here to celebrate the release of Secret Agent Josephine in Paris, I believe my (highly-professional) response was along the lines of “UH YEAH. DUUUUHHH.”

Our beautiful hardcover copy arrived a couple days later and was immediately a bona fide hit. It’s a spy caper set in Paris, and hits that illusive sweet spot of appealing to everyone with a strong female heroine (and her super-smart daughter), a devious art thief/bad guy and some hilarious craft-supplies-as-007-type-spy-gear visuals that made me snort. 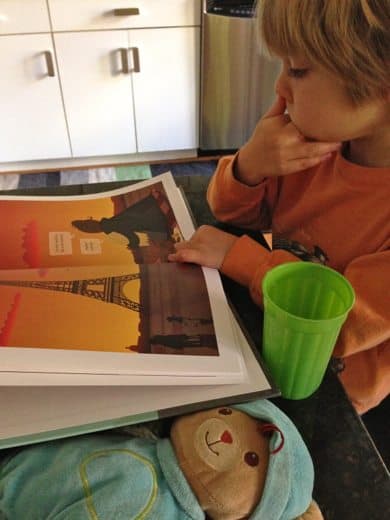 Ezra gives it two-sucking-fingers up.

My 8-year-old loves reading it aloud to his brothers, and only needs my help with the French phrases in a couple of dialogue bubbles. (Don’t worry, they’re basic enough for most grown-ups. I only had to consult Siri for translation help once! Yay me!) 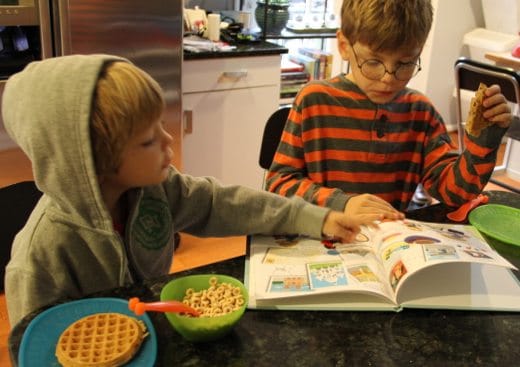 Brenda also sent me a wee package of French flags — just like the ones Secret Agent Josephine uses in the book — and Isabel set the mood further with a shipment of macarons from Dana’s Bakery in New York City. This was possibly their nice attempt at absolving me from having to undertake anything actually crafty in this post:

It was certainly enough for my boys, pictured below, right as my oldest attempted to take the entire plate hostage using a cork gun. 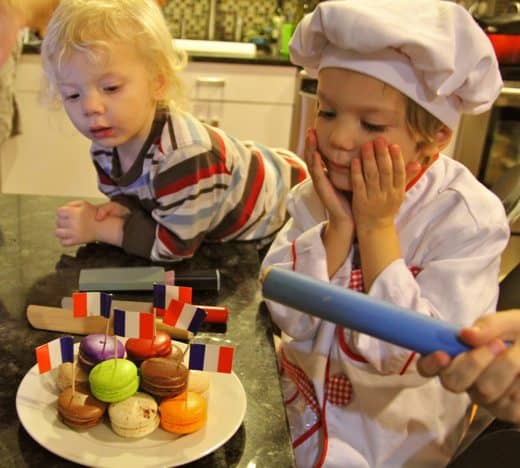 BUT NO. I CAN DO BETTER THAN THAT. I ALSO HAVE SUPER MOM POWERS OF NOT BEING USELESS.

In keeping with our merry Paris theme, I decided to bake some easy, almost-no-knead French baguettes. 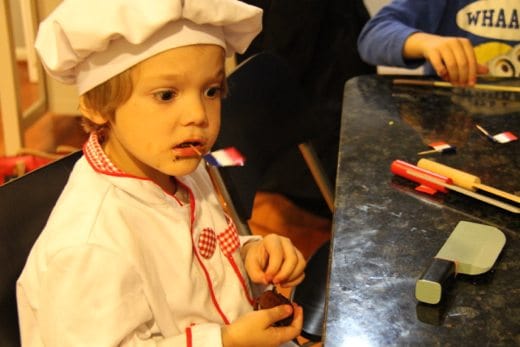 Chef Ezra: Vaguely alarmed by my ambition and/or the fact that we ate all the macarons already.

This recipe really is the simplest take on baguettes possible, and while it’s not going to produce artisinal bakery-level loaves or anything, they will be crunchy and soft and delicious and better than the average grocery-store baguette, mostly because you can scarf them down right out of the oven. Maybe pause to slap on some butter or tomato or soft cheese, if you want. (I ALWAYS WANT.)

You don’t need any special equipment, though a digital scale will come in super handy for portioning the dough. And I did skip the hand kneading in favor of my stand mixer. 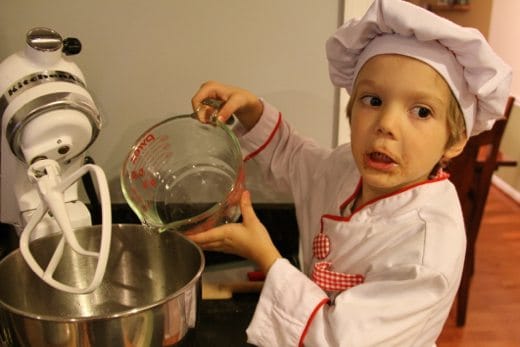 I also used a baguette pan but you don’t have to — in fact I might caution against it if your (or your 5-year-old’s) dough-shaping skills aren’t super great. We formed our loaves a little unevenly so they stuck together after the final rise and during baking. They broke apart just fine, but we lost some of that delicious crunchy exterior on each loaf. A parchment-lined baking sheet would have allowed us to space them farther apart and avoid that. 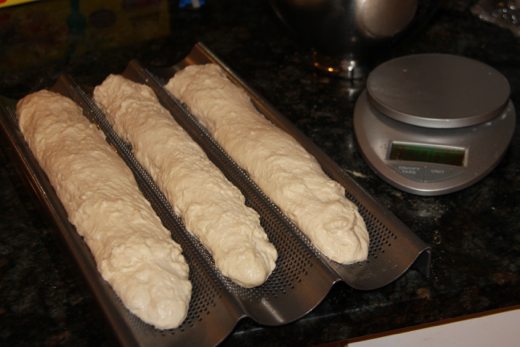 Oh, hang on. Ezra would like me to note that the time spent waiting for your dough to rise is an excellent opportunity for a costume change. 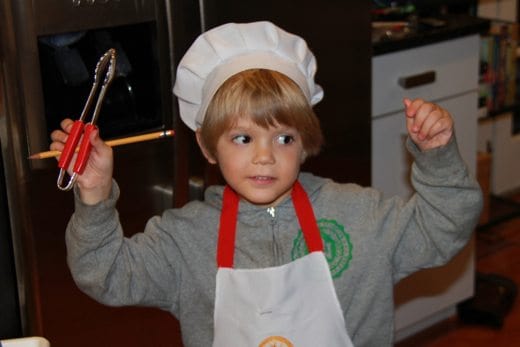 What, like you only own ONE chef  hat and jacket/apron? Pfft. Amateur.

Baguettes — even our abbreviated shortcut version — are a two-day process, with all the resting/refrigerating/rising, but the actual hands-on and active time is really minimal. The kids stayed excited and invested in the project when it counted, at least! We finally baked at 450 for 25 minutes, then let the loaves cool for 20. 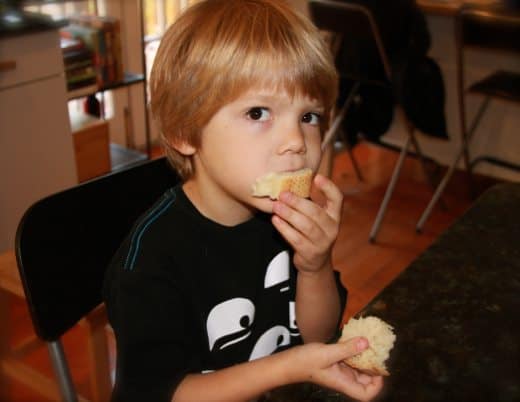 They were the longest 20 minutes of Ezra’s life, y’all. 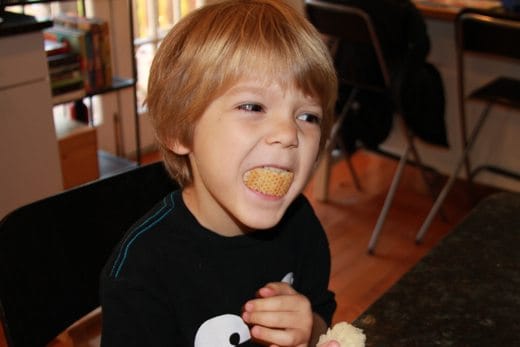 The bread is DELICIOUS… 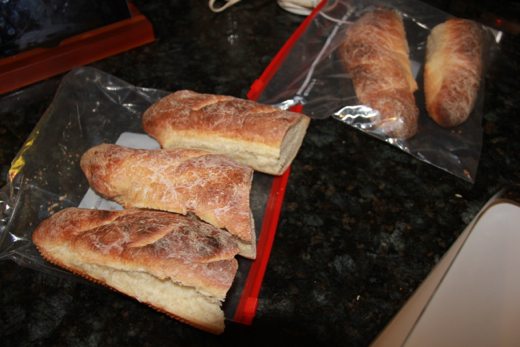 …though are admittedly some of the ugliest baguettes I’ve ever seen.

Wait a minute! I have an idea! What would Secret Agent Josephine do? She’d put some craft supplies to good use, is what she’d do. 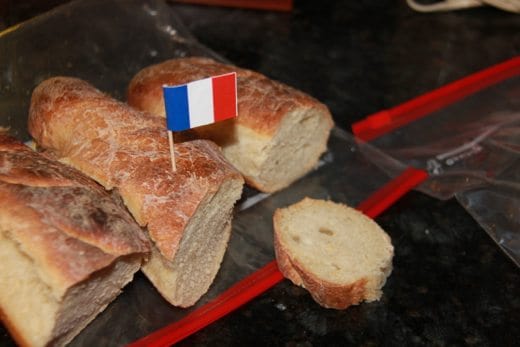 You can buy Brenda’s children’s book Secret Agent Josephine in Paris in hardcopy or for the Kindle. Congratulations, Brenda!