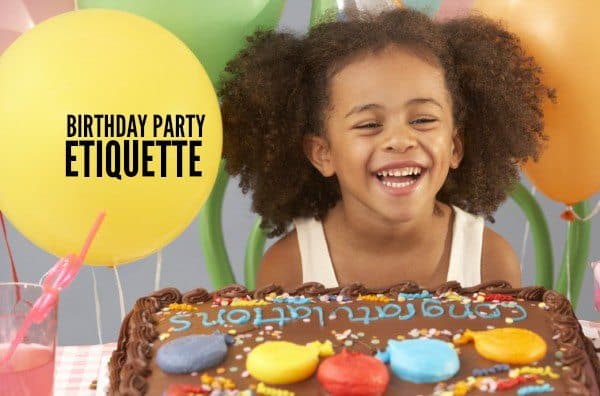 I have a birthday party etiquette question, and since you are my go-to etiquette expert (sending out procrastinated thank you cards six months post baby? Absolutely did that) I figured you’d be the perfect person to ask.

My daughter is nearing her first birthday and since hers, mine and my husband’s all fall in the same week we decided to have a super low key, open house style birthday party for the three of us. A drop by if/when you can type thing. On the invites I’m planning on noting that no gifts are necessary, but she’s the first grandchild on both sides so I have a feeling she might get a little spoiled anyway. (And I mean, if someone wants to throw something in there for mama too, I’m not going to say no.)

My question is, since there’s not going to be any sort of party structure, what do we do with the gifts we might receive? Do we open them right away or wait until after the party? I don’t want to offend someone who brought something by just putting it on the table untouched but I don’t want to make anyone who didn’t bring something (because we said they didn’t have to) feel bad either.

I think it would be both appropriate AND way less stressful for everyone involved to quietly set gifts aside until after the party. (After a gracious thank you, then whisked out of sight of any subsequent guests who arrive empty-handed.) Just like you have no obligation to open and serve a bottle of wine someone brings as a hostess gift, for example, I believe etiquette allows you to graciously acknowledge the receipt of a gift without immediately opening it, and to simply set it aside until a more convenient time.

A 1-year-old won’t really have any freaking clue what to do with the gifts in the first place, but will get quickly overwhelmed and possibly even distressed by being prodded to open and acknowledge a day-long ongoing drop-in parade of gifts. She’ll rather play with the wrapping paper, ignore/throw/cry at the gift itself, your house will quickly get cluttered with present and packaging detritus while you’re trying to entertain, and no matter when you choose to open them (as guests arrive or all at once during the party itself), you’ll run the risk of making the rule followers feel uncomfortable.

If, at the end of the party, there’s a lingering crowd of close friends and family members who brought gifts, you can go ahead and have your daughter open a few. (As long as she’s awake and semi-chill as opposed to exhausted and overstimulated.) Then space out the opening of everything else, take photos of your daughter with her gifts and send those along with a nice thank-you note.

I believe most people are accustomed to the modern-day kids’ birthday tradition of waiting to open presents in private, and anyone who chooses to ignore a no-gifts note on an invitation should be doubly understanding that the host can’t make a huge deal over a present when surrounded by guests who didn’t bring anything. Plus, you know, she’s a baby. She’s going to be way more excited by the box than the toys or cute outfits or whatever. Her first piece of cake will be a much better photo opportunity than a confused stare over yet another Elmo toy or toddler tiara or whatever.

If someone DOES insist that your daughter open their present immediately or asks when she’ll opening it that day, you can handle that on a case-by-case basis. If you’re really busy and there’s a string of people arriving, quietly explain that since you specified no gifts being necessary, you don’t want to be inconsiderate and plan to wait until a little later to open things. Or if there’s a lull in arrivals and there’s a quiet, empty corner of the house, pull your daughter and guest aside for a quick, discreet unwrapping.

If someone brings something for you or your husband, treat it more like a host/hostess gift than a birthday present and again go case-by-case. I typically set those gifts aside to open later as well, unless I’m greeting a single guest and can do a quick open right in the foyer out of sight of anyone who didn’t bring something.

(Tangent to party guests: Please don’t wrap hostess gifts, unless it’s something obvious like a wine bag or gift card holder. Or you know for a fact you’re the only invited guest. For bigger parties, it’s much easier for your hostess if she can simply accept and acknowledge the gift without having to take time on a big “reveal” — not to mention you’ll put her in the awkward position of opening something in front of guests who didn’t bring anything, while creating more trash/recycling for her to deal with. If you really want to bring something fully wrapped up, feel free to spoil the surprise a bit [“Just some pretty hand-towels I saw and immediately thought of you!”] so she thank you and then put the gift aside.)

And hey, if it becomes super clear that EVERYBODY ignored your “no-gifts” note and EVERYBODY is clamoring for a public opening of baby gifts, go for it. Watch your daughter’s mood and don’t feel obligated to make her open EVERYTHING, however — there’s nothing worse than watching a young toddler open a gift, be prompted to “do something” with it or acknowledge the giver (who might very well be a stranger), and then have said gift immediately yanked out of his/her hands and replaced with another package. (Which is why I still vote for opening things in phases post-party. But ultimately it’s your party, your call.)