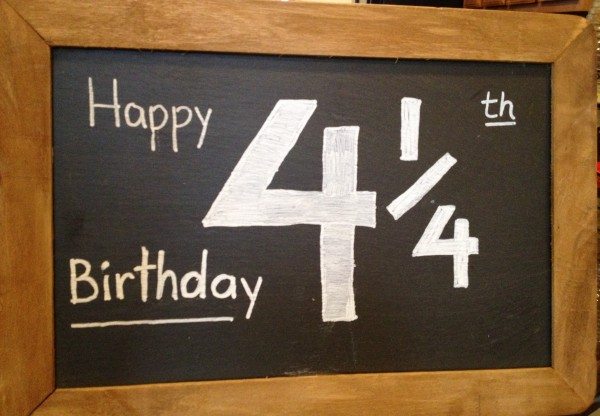 This post is sponsored by GLAD®. Small changes can make a big difference.

Having a child born on Leap Day makes celebrating his birthday interesting.

(The banner says Happy UN-Birthday. I made it myself with black construction paper, package string, and letters I typed in Word and printed. Is it perfect? No, nothing in life is, but it did impress by son who felt special because I spent that amount of time making something just for his birthday. Remember the Five Love Languages? This demonstrates his right here: Acts of Service.) 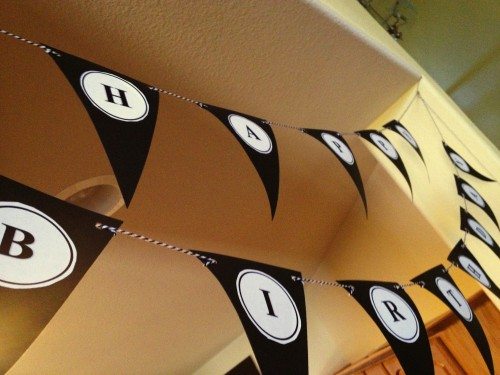 On the years he actually has a birthday we have a lot of fun and probably tend to go overboard. But it’s just so much fun! Last year, when he had his “fourth” birthday on February 29, I made him a t-shirt that said “I’m four!” I printed out a checklist, the sort your pediatrician gives you, that covered all the milestones your child should have met by their fourth birthday. My son, who has been alive for 17 years now, has a great sense of humor and enjoys gently poking fun at himself.

We have always been pretty low key about celebrating birthdays. The best thing about having a large family (remember, I have seven kids) is that you are your own party. Invite a couple friends over and BAM! instant big bash. Since we have many parties: birthdays and other celebrations, throughout the year, I am very conscious of the amount of waste that a party can generate. So, when I was approached to host a “One Bag Party” by GLAD®– where we only have one bag of waste at the end– I knew we could live up to it. This is how we always do parties at my house. 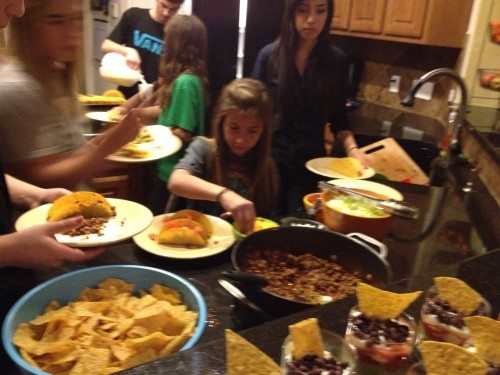 I like to set up stations, or areas, where everything you need it right there: taco station, s’mores station, hot chocolate station, drink station, dessert station.

Tacos are always the perfect food for any teenage get-together. I haven’t met a teenager who doesn’t like tacos and everyone can make their own. 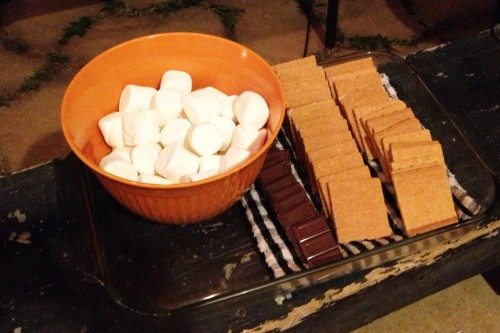 I never use paper plates or plastic cups. (Well, in the interest of honesty, I made an exception when I had my son’s entire Varsity football team over for dinner, because the thought of so many hungry, giant young men in my house was a little bit stressful. It turned out to be so much fun.) 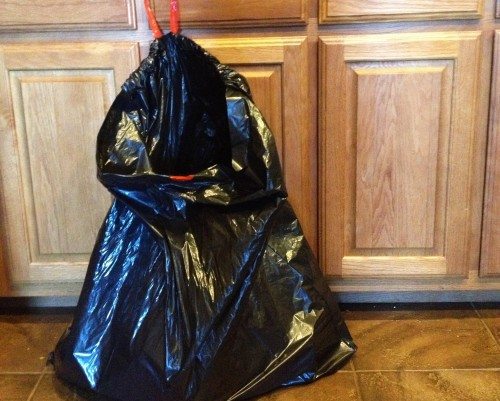 When having a party, hang your garbage bag in an easily accessible spot. You don’t want guests to have to go searching for the garbage can.

If you are having a large party and think buying paper products are cheaper than buying plates and glasses that are reusable, you aren’t shopping in the right places. 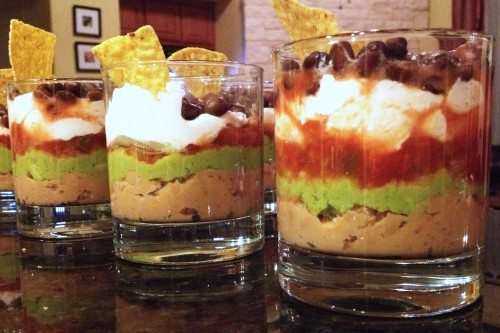 These glasses came in a box of 4 for $4. I bought 3 boxes of them to recreate a recipe I saw online. Most of the kids didn’t want them, but you know what I say? “More for me!” They held up in the fridge nicely over the weekend. I thought maybe the guacamole would turn brown, but it didn’t. The kids want me to use the glasses to make layered pudding next.

I also find it is easiest to stick with white plates. That way everything always matches each other no matter how far apart you purchase the items. Sometimes the parties are larger than the amount of reusable items that you can store in your home. However, it is still less expensive than renting the items. I have hit my local IKEA and dollar store for glasses, mugs, stemware and then after the party donated the items to a local charity that serves women and children. This benefits everyone: the people who receive the items, the environment, and you, since it can be counted as a charitable deduction.

One party that we had in the summer I bought glasses at the dollar store which were perfect for root beer floats we wanted to serve. I washed them out and sent the guest kids home with the glass they had used. Perfect and inexpensive item to add to party favors. 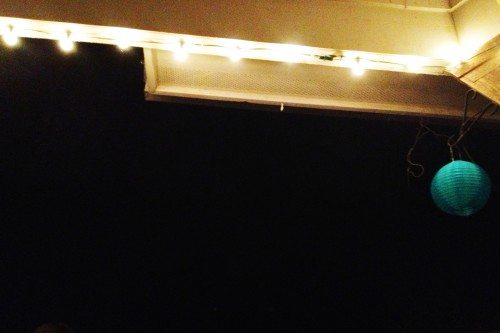 I try to buy timeless party decorations, things that I will reuse over and over again. Instead of buying streamers, I bought some outdoor lights to hang up on the patio. They are fun and festive and we will enjoy them all year long. Isn’t the turquoise solar lantern adorable? Shortly after the party, my daughter stole it off the patio to hang in her bedroom. I may have to get more for the patio, they would make every day a little more festive. 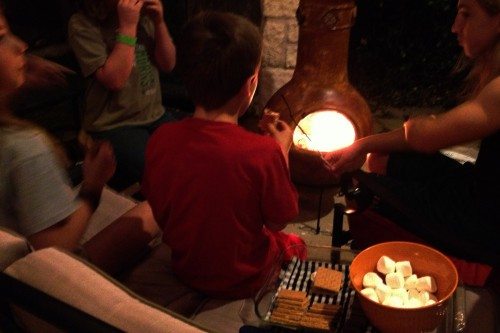 One of the things my kids have missed since we moved from Connecticut to Texas is bonfires in the backyard. Bonfires are just not practical here, unless we’d like to set the entire neighborhood on fire. It’s just too windy. 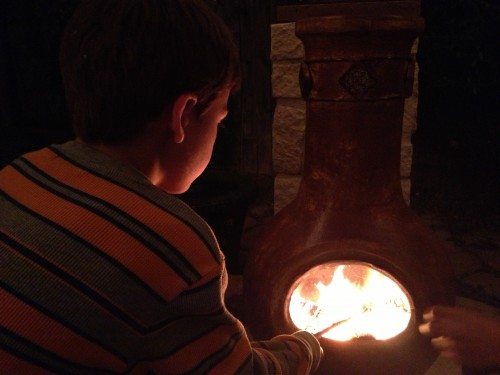 We recently bought a small outdoor fireplace, called a chiminea. We decided to utilize this as part of my son’s birthday party when he found out that his girlfriend had never roasted a marshmallow or made a s’more.

Everyone has to roast marshmallows and make s’mores before the reach adulthood. I think it’s a rule! 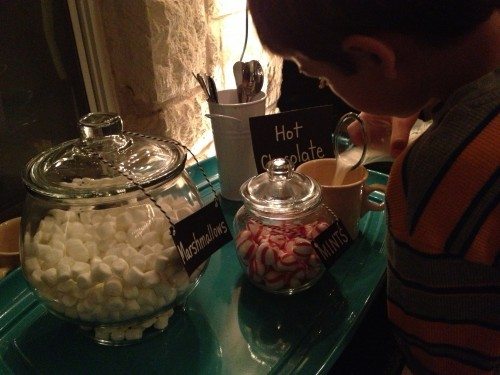 Since it was a chilly night we had a hot chocolate station on the patio, a giant coffee urn comes in handy. The mugs are from the dollar store. Should someone accidentally break one ::cough cough:: I wouldn’t be upset at all. 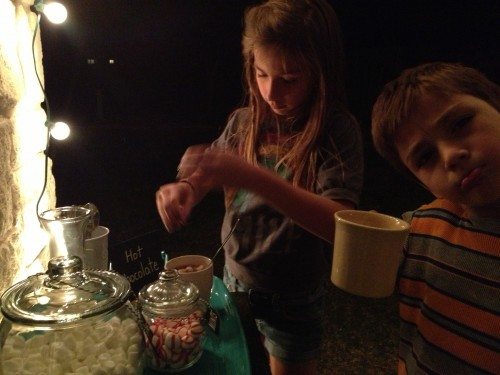 I made my son’s cake this year. Some years I order one, but funny enough my kids prefer the cakes that I bake. No one will ever look at a cake I decorated and ask, “Wow, did you really make that yourself?” I’m okay with that. I made the cake with love and my son knows it. And we both can laugh when someone suggests it would be perfect for the Cakewrecks website. 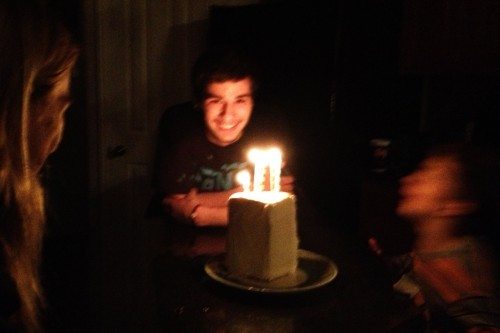 The low lighting is kind to the cake in this photo, hiding its many flaws. It is an eight layer carrot cake with cream cheese frosting, in the shape of a quarter of a cake. Because it is his quarter birthday celebration. And there are 4 and 1/4 candles on the top of the cake. Next year it will be half a cake, the following year three-quarters of a cake, then on his actual birthday he has a full sized cake.

And we sing our special “Happy Not-Your Birthday” song, which has had several different incarnations over the years. The most current one:

We only made this song up in the past few years when my son’s sense of humor matured. When he was much younger he would not have found this funny.

We rinsed the dishes and loaded the dishwasher was we went along during the party. We had very little food waste. I had several small items for the recycling bin. And our party for 13 people had close to zero garbage– mostly in the form of non-recyclable packaging, like chocolate wrappers. 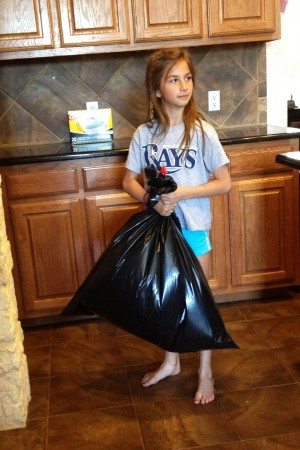 This is my daughter the morning after the party with the GLAD® garbage bag filled mostly of air. I ended up just putting it into our regular kitchen garbage can and days later it still isn’t full.

My motto is the less packaging I bring into the house, the less I have to worry about throwing away or recycling. It is possible to have a party for many guests and still not produce an extraordinary amount of garbage.

This post is sponsored by GLAD®. Thank you for supporting the sponsors that allow us to make this website possible.