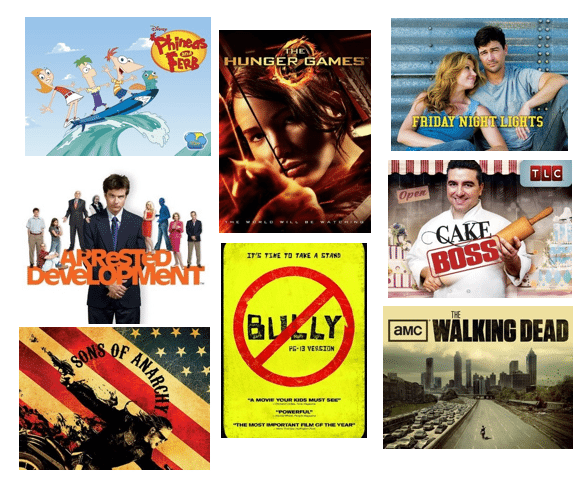 Summers are great and they can also be tough. There are just so many daylight hours. We’re loving them now, but soon, we’ll be counting how many more days before school starts again. (I would like you to write down the date that happens, and then send me an email, please). Last year, I bought my then-9 year old son a really complex Lego set from their architecture series. He was done building it in a day. There were 100 more days left of summer vacation. If I hypothetically bought a Lego set for every summer vacation day…. crazy talk.

Luckily, Netflix has become my internet best friend. And, for $7.99 per month Netflix will be your best friend, too (in fact, I’m giving away an annual subscription- details below). Granted, I’m kinda late to Netflix Streaming lovefest. Though being subscribers for over a year, my husband and I were bigger DVD and cable VOD watchers (we’re in our 40s and old habits are hard to break, yo). But I’m now a clear convert to the magic that is streaming internet TV and movies, especially since watching House of Cards. Have you seen my current Netflix queue? It’s ba-na-nas. More importantly, I have a Netflix queue at the ready for my son for this looooong summer.

But, if you’re looking for TV ideas for your kids to stay out of the sun during peak hours, Netflix Families has come-up with great lists of ideas organized in fantastic categories, like:

Also, Netflix will be rolling out individual profiles later this year and I’ve been able to try out. Looky-there:

So now when my son goes to his profile, which is set for children 12 and under, his recommended movie selections (based on his preferences and viewing habits) will be different from those offered in my profile. I also set up a separate Kallman Family profile that recommends movies that are PG-13/TV-14 and below. Our son is allowed to see some PG-13 movies, on a case-by-case basis, and this option allows us to review more options together and talk them through before selecting. These profiles will roll-out to Netflix members later in the year and from speaking to other families will be especially well-received.

One thing I was surprised by during my meetings at Netflix was how many parents don’t set the parental controls on their Netflix accounts. In fact, during our meetings with Netflix my friend Heather Armstrong was poking great fun at me about it. She posted a funny picture of me asking Netflix about it.

You find and set the parental controls quite easily by going to “Your Account” and then scrolling to “Preferences.”

Lastly, until I visited Netflix’s headquarters I wasn’t aware that Netflix streaming could be accessed through 1,100 internet-capable consumer devices and most families have 5 of those already in their home . I’m such a fan, I plan on gifting Netflix annual subscriptions to family members during the holiday season.