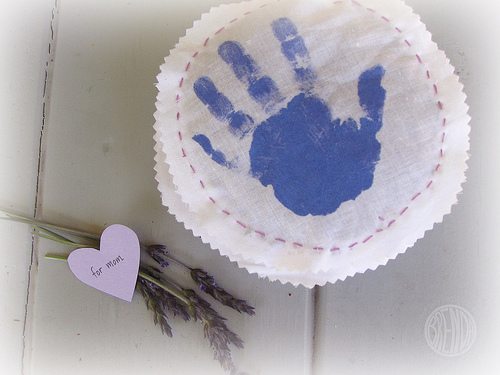 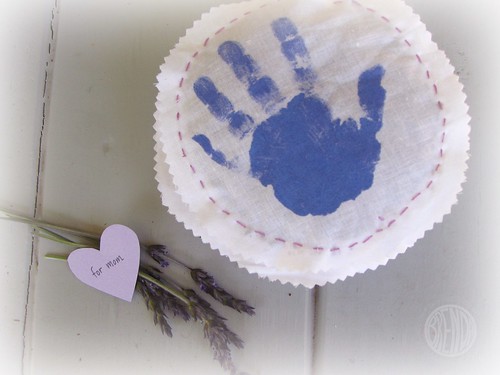 When I think of Mother’s Day I often think of sweet-smelling things like tea and cinnamon, flowers and perfume. I’m not really sure why. It must be something to do with the way smells evoke the strongest memories. I have many memories of getting up early with my brother and picking my mom flowers out of our neighbor’s garden for Mother’s Day. I can remember the smell of the dew on the sweet peas as if it were yesterday. Every once in a while I catch that smell again and it sends me right back. Just like the gum from my Grandma’s purse. It was Doublemint. I’ll never forget it.

I thought making a little lavender sachet would be the perfect gift for mothers and grandmothers on Mother’s Day. What better way to remind them that you love them than something that smells good every time they open their underwear drawer or closet or take out a towel from the linen cupboard?

To tie in with the memory aspect of it, I decided to stamp these sachets with handprints because I know from my own experience with my daughter that little hands grow so quickly. I just want to stop time and always remember what it was like when she was this little. 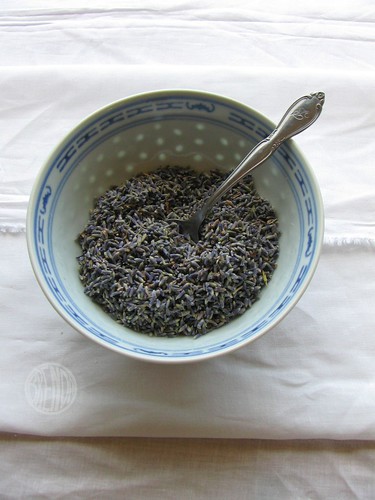 First I ordered some dried lavender from Etsy. I wanted to dry my own but that takes about two weeks and I didn’t have that kind of time. If you don’t have time for mail-order, I think you can find dried lavender at bulk food stores or you could just use potpourri which is usually available at craft stores. I thought about stealing some rosemary from my spice cabinet but that probably wouldn’t be very cost effective.

Next I bought some white muslin. I did try a batch with voile which looked splendidly sheer but ended up being rather a nightmare with the glue and paint so unless you are incredibly skilled at gluing or sewing, I’d say skip the super-sheer fabrics. A pillowcase, handkerchief or even a linen napkin would also work well. 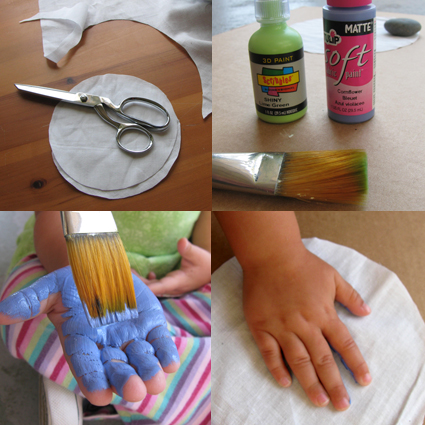 Once you have your fabric ready, cut it into circles that are big enough for hand stamping, leaving plenty of room around the sides. Make sure you cut two circles for each sachet that you want to make: one for the hand-printed side and one plain for the back. With some simple fabric paint, paint your child’s hand (or if they are older, let them paint their own) and stamp away! Be very careful with fabric paint though because it is permanent. (Even though we used fabric paint, water-based children’s paint is the safest.) 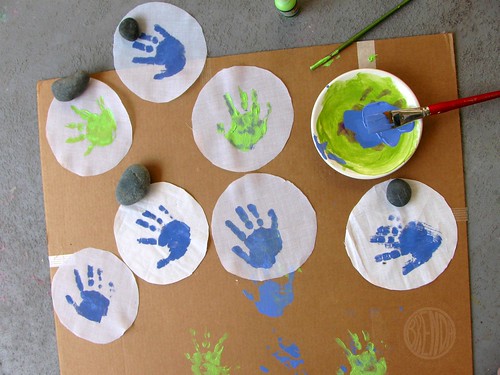 I once did a craft like this with some kids I babysit and for some reason we painted in their laundry room. To this day (five years later) there is a splotch of yellow paint on their dryer. If you don’t scrub it off right away, it’s pretty much going to be there until the end of time. But that doesn’t mean it isn’t good. Permanent paint has it’s purpose. It won’t ever ever come off on Grandma’s white linen hand towels either and that’s a good thing! 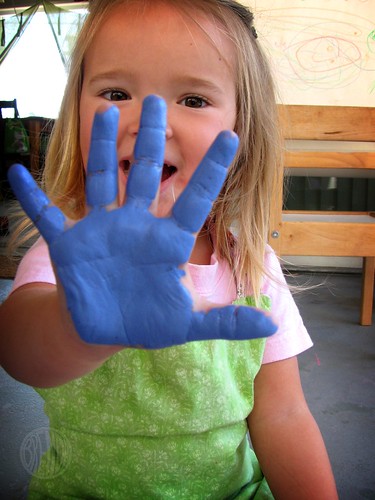 This next part is a bit tricky. I found, after several catastrophes with fabric glue, that a hot glue gun is the best way to adhere fabric quickly for these little pillows. If you want to wait around all day, you could try fabric glue but I don’t recommend it. 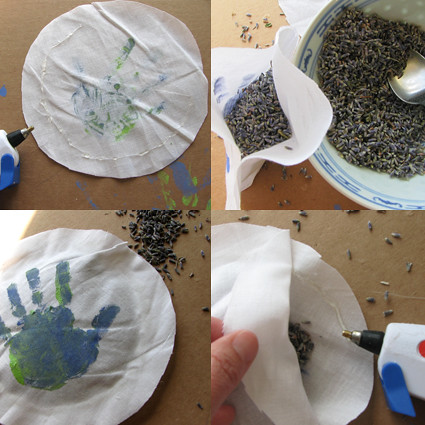 After the handprints are completely dry (usually four hours), turn them over and glue a fine beaded line around the handprint but do not close the circle. Leave a two-inch gap so you can spoon the dried lavender into the sachet through this gap later. After you have made a nice big letter “C”, stick your backside fabric onto the front side (making sure the handprint is facing outwards of course) and carefully pat it so the glue sticks. You will have to work quickly because hot glue dries fast but you’ll also want to be careful because when it’s hot it can seep through some fabrics and burn you. (Glue guns should only be handled by responsible adults.) A blotting cloth might be helpful if you’re not tough like me. I have asbestos hands.

Once the glue is completely hardened then comes the fun part: Spooning in the lavender! Pretty much anything works. Pouring it from the bag, spooning it, a big funnel–whatever works for you. Once you have filled your sachet loosely (don’t over-fill it) just grab the glue gun and seal up the hole. If you’ve glued it properly, the lavender should not stick to the sides and will stay put. If you have a leak here or there don’t worry. They can be patched up with a dot of glue. If the lavender sticks to the glue it’s not the end of the world. Mothers understand imperfections. 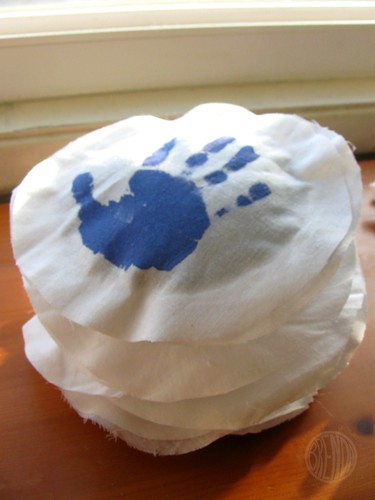 You could stop here. These pillows are perfectly useful. It’s not like they are going to get much wear and tear in the undies drawer. But if you’re like me, you probably want the edges to look a little more finished. So grab a needle and thread and some pinking shears and finish them up! 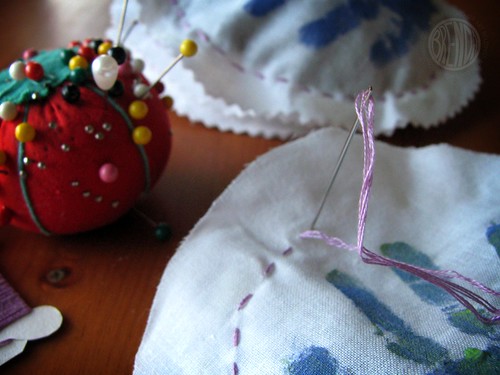 I know, you’re probably thinking, What?!! I have to sew? It’s not so bad. A little stitching is good for the soul. I finished these up during one bath time and one Disney movie the next day. And let me tell you, those minutes I spent sniffing all that lavender were divine. It really is true that lavender is calming. I might have to gift myself one of these little pillows on Mother’s Day and sleep with it. 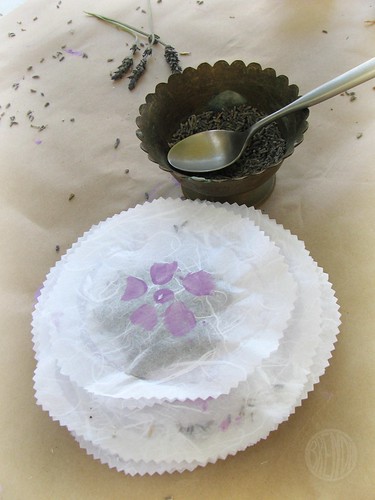 If you’re truly averse to sewing you can make these with paper. We made some with pretty rice paper, paper glue and acrylic paint (water-based children’s paint is the safest choice) and they turned out quite cute. They are a little more fragile and crunchy but they are still pretty to look at and smell! 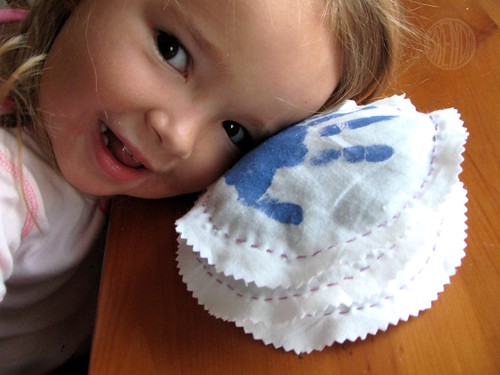 Whatever you end up doing, your finished product will be completely worth it.

These are fabulous. I love lavendar sachets and making them personal like this is such a fun idea.

Great Job! I love lavender, thanks for reminding me of it’s calming abilities, I could have used some yesterday!

What a great idea! Somehow grandmothers and smells are so closely tied. My grandma always smelled of Nivea and Rosemilk lotion. Always.

Such a cute idea! I’m known for always wearing lavender, so this is right up my alley. And it’s a pretty green project, love it!

This is a really nice – and do-able – project. To me, that means that I would start it and actually finish it! If you feel like going to the trouble, you could enter it in my Mothers Day contest and maybe win a 4 lb. candy pack. You could also get a link to your site from it!

What a lovely and personal idea for mom or grandma!
I just found a fun idea I sent to my Mom who is also a great grandma. Crate and Barrel has photo coasters where you can slide a picture of the kids behind glass and Moms can show off their loved ones to friends.

I think this is such a simple and cute idea. It is refreshing from the complicated long and expensive usual mother’s day gifts. thank you for sharing this wonderful idea. HMDAY 2 U!!!

Do you think you could premake the sachets and have the kids put their handprints on after?