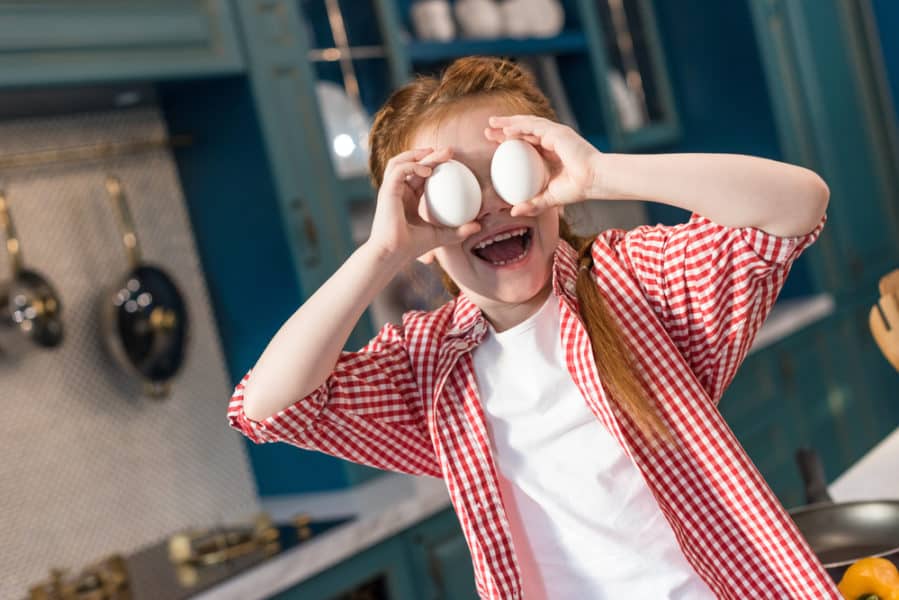 Setting Your Kid Loose in the Kitchen

My son (8 years old) is currently cooking and baking obsessed. He’s always liked to help out when I’m making dinner or baking cookies, but recently his passion has gone super next level.  Cooking shows and competitions are his favorite things on TV, he got a stack of kid-friendly cookbooks for Christmas, and he wants to make his own meals and snacks ALL BY HIMSELF whenever possible. We usually eat dinner as a family during the week, but his dad works late sometimes so I let him eat earlier, which also gives him a nice chance to experiment in the kitchen.

The not so nice part? I really mean EXPERIMENT. All those cookbooks? He looks at the photos and then just tries to copy them without, you know, reading or following the actual recipe. He makes a lot of really disgusting sandwiches. And he definitely doesn’t grasp the basics of cooking (and I mean basics, like waiting for the water to boil before adding the pasta). I think watching shows like Top Chef and Chopped where everybody just grabs ingredients and whips together a masterpiece make him think he can do the same. I always supervise but if I push him too hard to actually *follow the recipe* he loses interest and I end up doing most of the work!

So on the one hand, I really want to encourage his passion here, but on the other hand, he’s wasting a ton of food on inedible “creations.” He makes a huge mess of the kitchen. He’s not preparing decent or healthy meals for himself (when something doesn’t turn out as planned he just defaults to a PB&J for dinner). And I’m sort of worried he might set the house on fire if I’m not helicoptering in the kitchen every time he decides to make a snack. I also have a wild and crazy three year old and lately find myself out of patience about this.

I know you have a mini-chef of your own (who maybe is just…more naturally talented than my kid? harsh to say but possibly true), so any advice you have on helping a kid explore an interest in cooking while keeping your sanity would be appreciated.

Mom of a Mad Scientist Chef

Let me just assure you that no, my son is no more of a cooking/baking phenom than yours. He’s a wonderful helper in the kitchen when given a set task and REALLY loves to eat good food, but when the inspiration to just open the fridge and MAKE something hits…his track record gets a lot less delicious. He also tends to zone out and lose interest about halfway through when actually following a recipe, and he either makes some really obvious mistake (like forgetting to set a timer or mixing up tablespoons for teaspoons) or like you, I just end up taking over. And the whole “I saw a photo or saw this on TV and therefore know how to make it” misplaced confidence thing is real. And it can definitely be annoying.

Setting Ground Rules and Your Child Up for Success

So it’s okay to set some ground rules on what he’s allowed to use, both ingredient- and equipment-wise. You can make it a game! Pretend you’re Ted Allen on Chopped or Alton Brown on Cutthroat Kitchen — Here are the ingredients you are allowed to use tonight. Here are your kitchen tools and utensils. And finally, you are limited to the toaster and the microwave.

This is also a subtle way to set him up for success AND ensure that he gets actual food he will eat. I put out cheese, cherry tomatoes and some leftover chicken. I tell my kid he must serve everything kabob-style, with no plates or forks. He happily gets to work cutting and skewering his ingredients. At some point, I announce The Twist, which is that his kabob must include a dipping sauce. This satisfies that “dash to the fridge and see what I can create” urge while also limiting how much damage he can inflict. (He’ll most likely just grab yogurt and cucumber, or mix honey into ketchup or something. It might not be delicious, but at least it won’t ruin the entire meal or use up $40 worth of food.)

You’re handing him workable flavor profiles and letting him practice those cooking basics (like knife skills, boiling water, basic reheating, seasoning, etc.), while still allowing him feel the pride of making something “all by himself.” (And making something that’s PROBABLY EDIBLE.)

If you’re able to supervise a bit more closely, you can put out ingredients that require more technique (maybe an omelette or fancy grilled cheese sandwich or soup). Then, in your role as “host” of the competition, you can sort of…follow him around and ask leading questions about say, how hot the burner should be, or what he’ll use to oil the pan. This can curb the more obvious mistakes and keep him focused on what he’s doing.

Finally, if you can find kids’ cooking/baking classes or camps in your area (check out our friend Mommy Poppins for suggestions by region), they are a worthy splurge. They’ll cover the basics, hammer home the kitchen safety rules about knives, heat, metal in the microwave, etc, and send him home with some accessible, repeatable recipes. (And recipes without photos, so he’ll actually need to read the words to recreate them.)

More at Alpha Mom on Cooking with Kids:

Isn’t Ted Allen the host of Chopped? I think Tim Allen is the Tool Time guy.

I would also recommend try to find old episodes of Alton Brown’s Good Eats which takes things a little slower and includes the science behind cooking. There should be new episodes coming soon as well. He has a few recently re done episodes that might still be running on cooking channel before the full good eats reloaded starts so you might look for those as well.