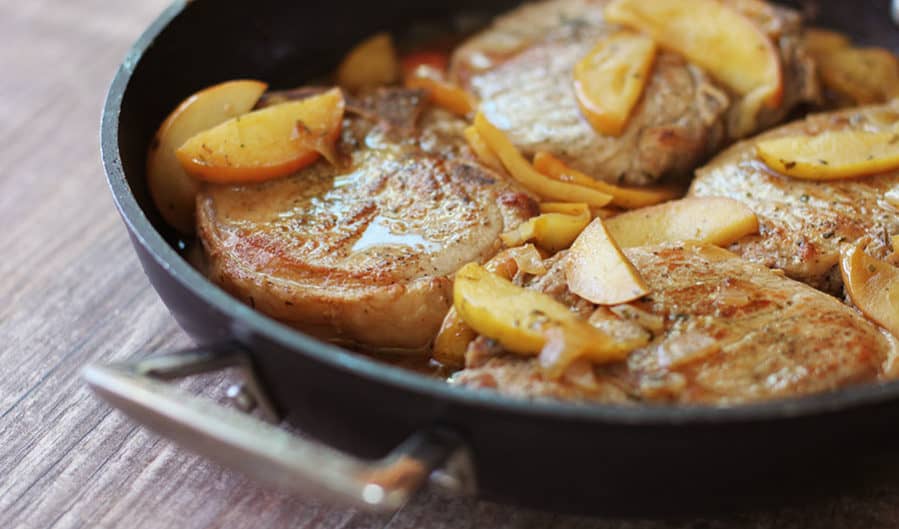 Knowing how to make pork chops is a great skill because this classic dish can be both impressive as well as cozy and homey. Cooking apples with the pork chops really take them to a delicious place, adding a lot of flavor to the sauce as well as a nice sweet contrast to the meat. Today we’re going to talk about how to make pork chops with apples so you can make them for your family and, one day, yourself! This is why we think it’s a meal that kids show know how to make before leaving home. 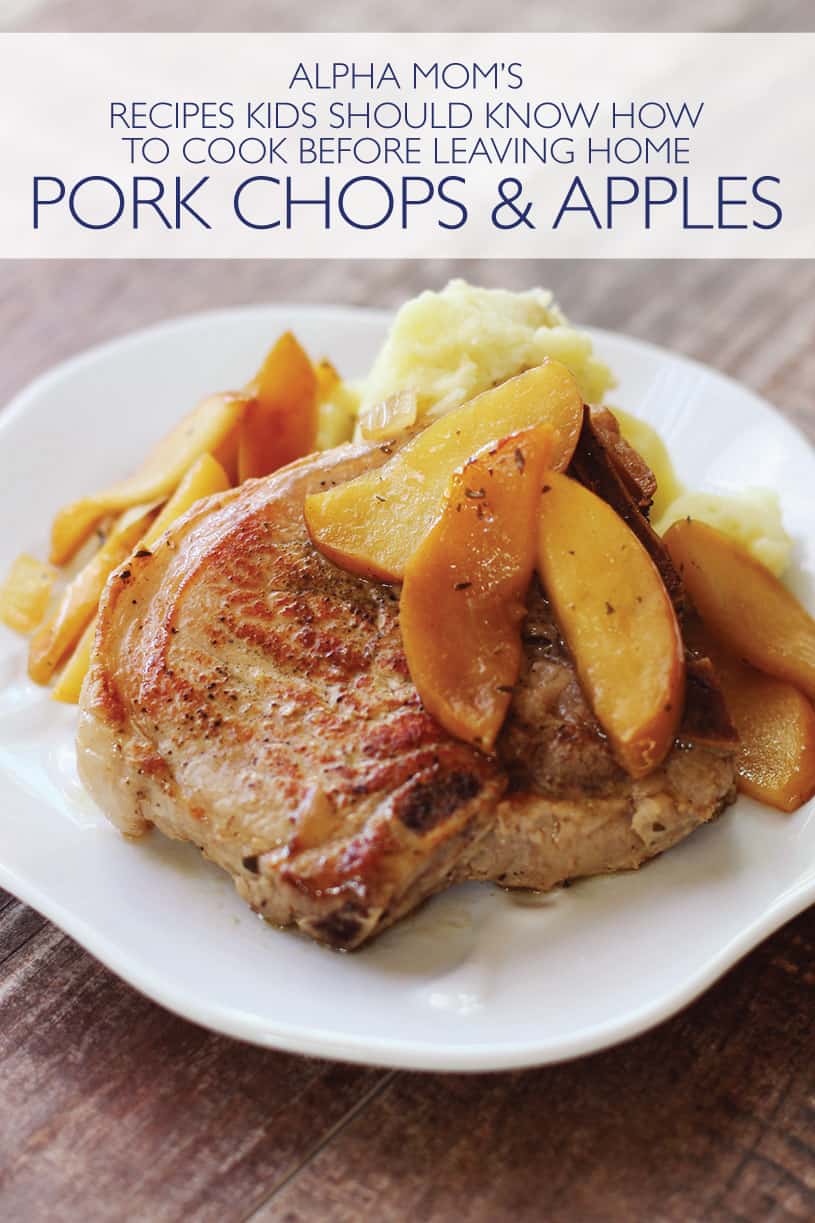 Cooking pork chops is not hard and the preparation is quite simple, however, it’s really easy to mess them up.

Want to know the secret? Don’t overcook them! Pork chops really should be cooked only to medium rare, which is what you get when the meat reaches an internal temperature of 145º F. Don’t worry, the pork is safe and this temperature is what experts recommend. Go beyond that and the meat just gets tougher and tougher, making it not such a great meal after all. Having an instant-read thermometer will really help you cook the pork chops just right. 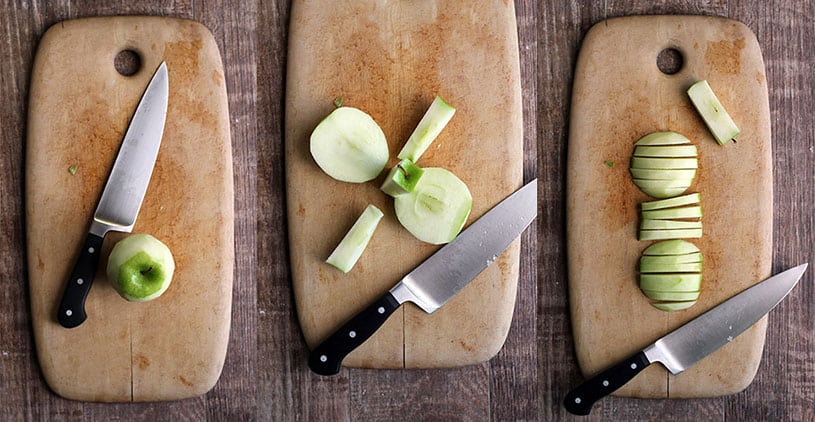 The apples really add a nice component to this recipe, and slicing them up is easy peasy! You don’t need to peel them, which is probably my favorite part of this recipe. If you look at the picture above, this is my go-to technique for slicing apples. First slice off opposite sides, cutting close to the core. Then slice off the now not-so-wide opposing sides. Place all the apple pieces flat side down and slice away! (The apples in the photo above are peeled already because I took these photos when making an apple pie, but seriously, you do not need to peel them for pork chops, promise!) 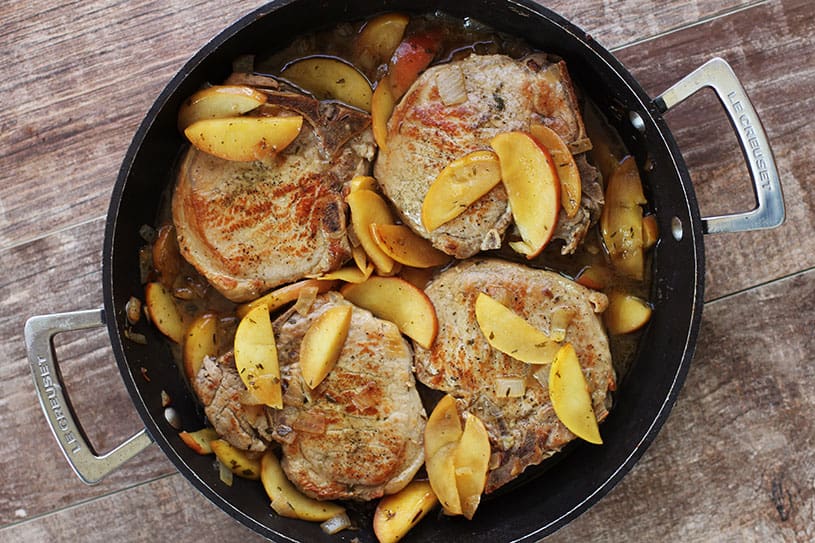 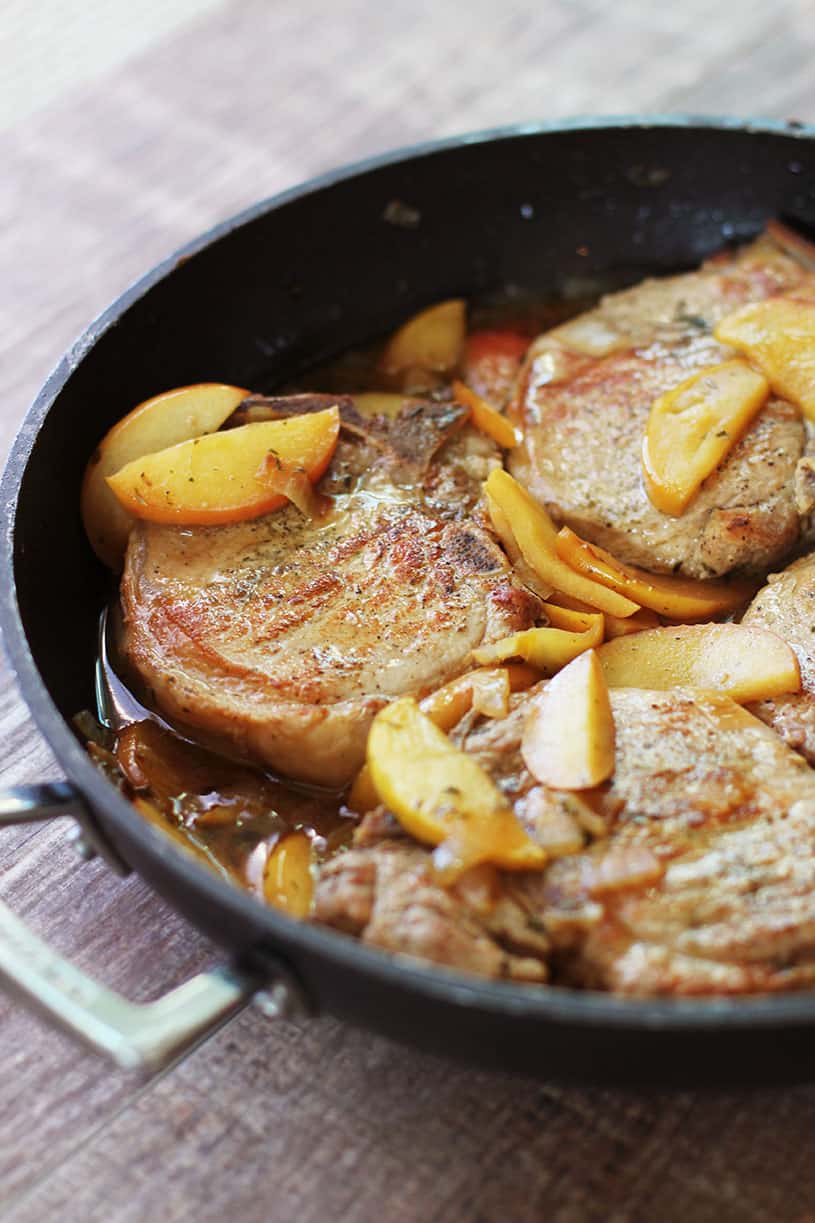 My favorite part of this particular recipe is the au jus, which is the thin gravy from the cooking juices left in the pan. It just tastes so darn good, and I like to drizzle it over everything on my plate! 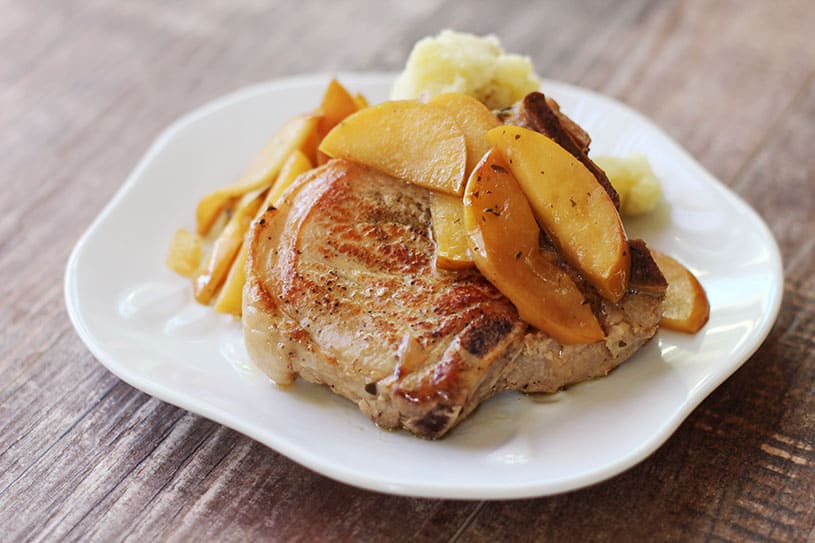 How to Make Pork Chops with Apples 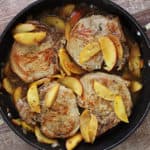 This recipe only uses one pan, making it a nice go-to meal for any day of the week.

4 pork chops (bone in or boneless both work, cooking times will probably be shorter with a boneless chop)

Chop the onions and slice the apples and set aside.

While the pan is heating up, sprinkle the pork chops evenly on both sides with ground sage, kosher salt and pepper. Add 2 tablespoons of the olive oil to the pan. Using tongs, carefully place each pork chop into the pan, pushing each chop around the pan a bit to spread the oil around.

Cook the pork chops in the pan about 5 minutes per side, until they are browned, with nice dark brown spots on the chops. Using the tongs, remove the pork chops from the pan and put on a plate and set aside.

Add the chicken stock, apple cider vinegar, 1/4 teaspoon sage, 1/4 teaspoon thyme and 1/2 teaspoon parsley to the skillet. Stir everything together and reduce the heat to medium-low (3 on a scale of 1-10).

Once you reach 145º F, turn off the stove and remove the skillet. Serve immediately. Delicious with mashed potatoes or rice, and I even like the pork chops served over a bed of greens. 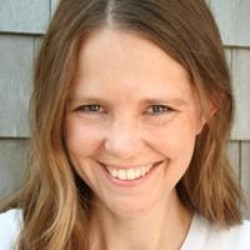 Jane Maynard is a mom, wife, graphic designer and blogger living in the San Diego area in sunny Southern California. Jane started her food blog This Week for Dinner 9 years ago and has be...

Jane Maynard is a mom, wife, graphic designer and blogger living in the San Diego area in sunny Southern California. Jane started her food blog This Week for Dinner 9 years ago and has been posting weekly meal plans ever since, in addition to recipes, travel, kitchen tips and more. Jane writes for the food sections of several websites and is always busy cooking up something new! Jane is pretty much obsessed with chocolate chip cookies and does not want to fix that about herself.