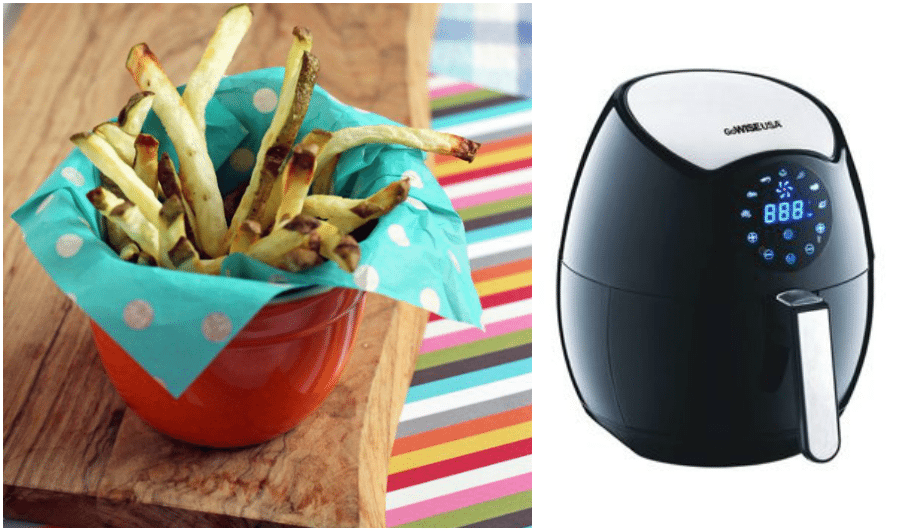 Why We Love The GoWise Air Fryer

I’ve heard about air fryers now and then over the past few years, but wasn’t quite sure if I should believe the claims. Could a countertop kitchen appliance really produce food that tastes fried without deep frying? When I had the chance to try the GoWise Programmable 7-in-1 Air Fryer I decided to put it to the test. 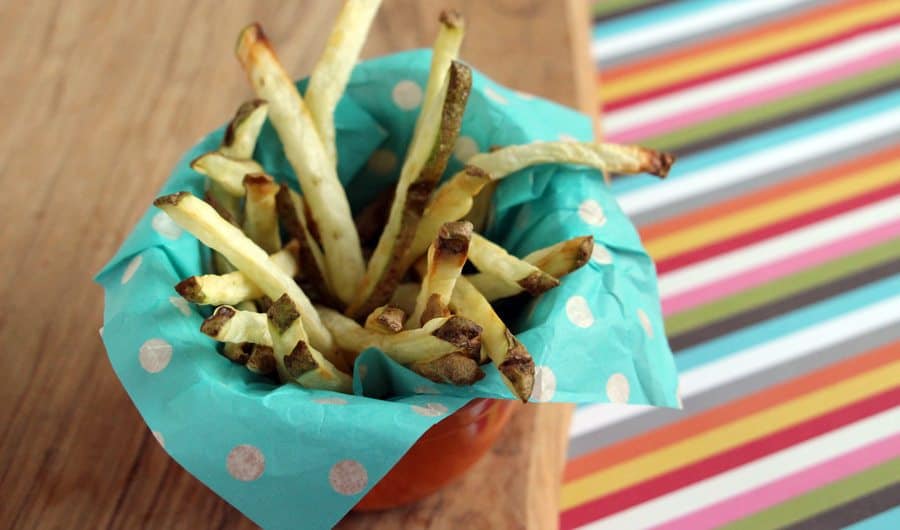 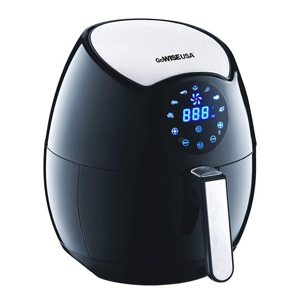 If you are unfamiliar with air fryers, they are basically small countertop convection ovens. You fill the basket with food and a speedy little fan inside the appliance whips hot air around to quickly cook whatever is in the basket. The GoWise Air Fryer has an electronic menu that lets you manually set time and temperature as well as seven pre-programmed settings for poultry, veggies, shrimp and other foods.

Contrary to what the name suggests, an air fryer requires very little oil. I’ve cooked over a dozen recipes in the air fryer and the most oil I’ve used in a recipe was a tablespoon. Most recipes  require no more than a quick squirt of oil spray (such as Pam) and I’ve found there are many dishes that cook successfully with no oil at all.

Based on what I’ve tried so far, you can cook pretty much anything you would cook in the oven in an air fryer. Roasted veggies, baked chicken, frozen pizzas – even cakes and muffins if you’ve got pans small enough to fit in the basket. 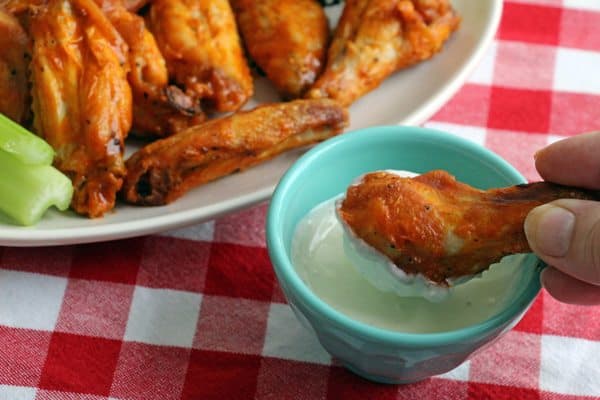 Can an air fryer cook healthier versions of your favorite deep fried foods?

But what the air fryer is very best at is faking out deep fried foods. As is the case with many families, my tween boys and I are in a constant tug-of-war over healthy food and junk food.  For the most part, I try to come down on the healthier side of the food spectrum when I’m shopping for groceries and preparing meals. My kids, on the other hand, would be happy eating junk food for breakfast, lunch and dinner. I’ve found that the air fryer is a good way to split the difference now and then. I can give them their favorites prepared in a much healthier way.

That’s why, of all the dishes I’ve made so far, my family’s very favorites are homemade French fries and Buffalo wings. These are dishes we order occasionally at restaurants but I never cook them at home because of the mess involved in deep frying and because greasy, deep-fried foods are obviously not particularly healthy choices. I feel a lot better about making both of these in the air fryer though. I can make a large batch of fries using just a few teaspoons of oil and they come out almost as well as restaurant fries. Wings require no added oil and I’ve found that cooking them in the air fryer causes as much as a quarter cup of fat to render from the skin. Net, that’s less fat! I can get behind that. 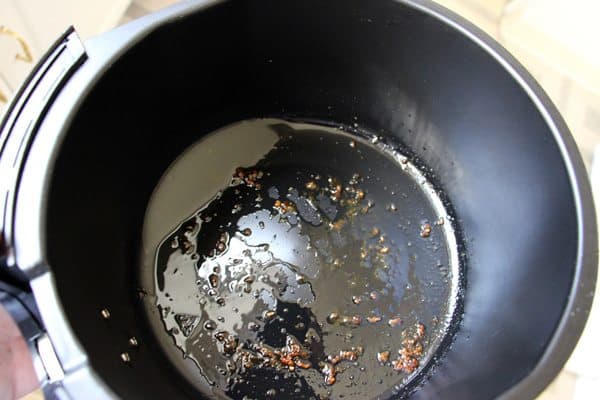 See all that fat? It used to be on our chicken wings!

Other favorites foods I’ve cooked: frozen tater tots and taquitos (so crispy!), homemade eggrolls, and canned biscuit “doughnuts.” I’ve also made some delicious roasted cauliflower and a disappointing batch of brussels sprouts that never quite got tender.

Does an air fryer really cut down the cooking times dramatically?

I’ve found that this air fryer generally cooks everything in about half the time suggested in a standard recipe or on the side of the box. It’s not as fast as a microwave, but it’s definitely a significant time-saver. And everything I’ve made is wonderfully crispy – much crispier than when I make the same foods in the oven.

The GoWise Air Fryer basket is large enough to cook a side dish for my family of four. When I cook a main dish, I’ve found I usually need to make two batches, but the quick cooking times don’t make that too much of an issue.  Though the pan and basket are hand-wash only, non-stick surfaces make clean-up easy. 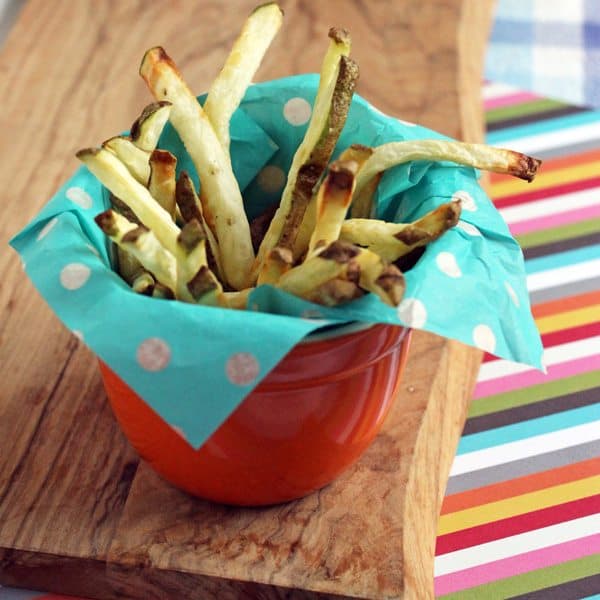 Any downsides to the air fryer?

So what are the downsides of the air fryer? The main issue I have is the amount of space it takes up. This air fryer is a fairly large kitchen appliance with about the same footprint as an Instant Pot or a stand mixer. If you have a small kitchen, like I do, it will be hard to find a spot for an air fryer in a cupboard or on crowded countertops. Also, as I said above, you can cook pretty much anything you’d cook in the air fryer in an oven. But from oven baking, the outsides won’t be quite as crisp and it might take a little longer, but you definitely don’t have to have an air fryer to get the job done.

Strengths: Cooks food with little or no added fat or oil, in much less time than an oven takes. Super crispy results. Easy clean-up.

Weaknesses: Doesn’t do much your oven doesn’t. Largish footprint can make it difficult to store.

Final Word on the GoWise Programmable 7-in-1 Air Fryer: If you have the space in your kitchen for this appliance, I would definitely recommend it as it saves time and the results for achieving crispy foods are superior to that of what would be achieved with an oven. 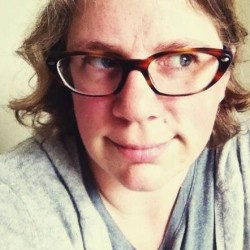