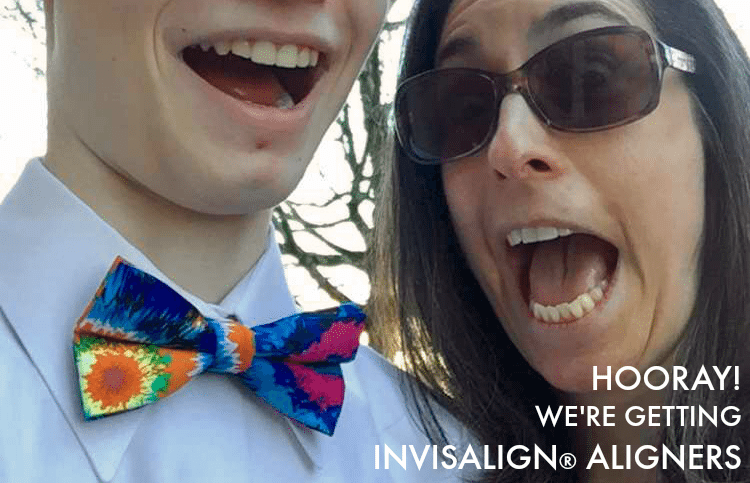 Disclosure: My son and I are receiving complementary Invisalign® treatment, but all opinions expressed are my own, honest assessment of our experiences.

This is going to be a multi-post series about my and my son’s experience with Invisalign clear aligners, but honestly, to understand it, I have to start with a different story. We need to start with the story of my love/hate relationship with teeth—my own teeth, of course, but also how it affected the decisions I made about caring for my kids’ teeth over the years.

Our teeth so far—mine and my kids’. (It’s important.)

Let’s start with me: I have good teeth. Great teeth, if my dentists are to be believed. I didn’t have my first cavity until I was nearly 40, and if I’m being honest, I still don’t really understand what’s involved in a root canal. I had orthodonture back in the early 1980s when there weren’t many (any?) options in braces and retainers; I wore bulky headgear to sleep for years to address my overbite, and when I accidentally threw away my retainers on my lunch tray as a freshman in high school, my parents decided I was done with treatment. My entire life since then, I’ve been told I have a great smile by everyone except my mother, who thinks I “show too much teeth” when I grin. Yeah, my teeth are big. Yeah, I grind them at night, but they’re healthy and straight(ened). All good.

Then I had kids. They—like me—have “good” teeth: strong and healthy, albeit crooked. I dutifully took them to the dentist and orthodontist. My daughter had some “phase 1” corrective orthodontia and then full braces in “phase 2.” When my son was eight years old, he ended up with a palate expander in his phase 1, followed by braces, and by the time that wrapped up at age ten, his teeth looked amazing! (Better than mine and my daughter’s, honestly. We probably both could’ve benefitted from palate expansion as well, as our family produces small mouths and large teeth.) We were told to bring my son back every 6 months so the progress of his permanent teeth could be watched, and we were told he would likely need another set of braces in phase 2. I’m not going to lie to you; that sounded an awful lot like “the orthodontist is considering a summer home,” to me. But I brought him to his appointments for years. And then… he had a check-up scheduled on a day when we ended up having a huge ice storm here in Georgia, and the city shut down. I called and left a message with the orthodontist, asking them to call us to reschedule. They never called, and I never called again. It wasn’t intentional, really. Life just got busy. And he looked fine. And because my son is on the autism spectrum and has numerous sensory sensitivities, braces had been literal torture for him and us—he broke wires constantly, refused to eat, complained of headaches, the works. Maybe I was subconsciously glad he was done with the orthodontist.

Fast-forward to now… and reality setting in.

As I’ve gotten older, people still compliment me on my smile, but I started to notice changes. My teeth—always a little crowded, even after treatment—were shifting. One of my top front teeth was no longer in alignment with its neighbors (had it moved back or the others moved forward…?), and one day I saw a picture of myself where I was hamming it up, mouth wide open, and to my horror I realized my bottom teeth were all crooked and overlapping. If I was smiling and you looked at me straight-on, maybe you wouldn’t notice these things, but suddenly it was all I could see. I started feeling self-conscious about my teeth. So I started looking into adult orthodontia, and Invisalign treatment was the obvious solution. For one thing, I wasn’t interested in sporting a mouthful of metal in middle age, anyway, but as I’ve recently returned to acting in community theater, having visible braces was a non-starter unless I wanted to give up my hobby for the duration of treatment. For another, my research suggested that the Invisalign system may be faster than treatment with conventional braces in some cases.

Of course, I was just about ready to proceed when I experienced a small pang of guilt. Here I was, considering non-essential Invisalign treatment for myself, when I’d neglected to properly finish out my kid’s orthodontic treatment. Oops! Hey, maybe we could do it together? My son was now nearly 18 years old, and starting college, and his experience with conventional braces hadn’t been pleasant—for all these reasons, I figured virtually-invisible aligners might make things more bearable. Besides, his teeth looked pretty good, so probably he didn’t need much, right?

Bring on the Invisalign assessment

The good news, of course, is that we were fortunate enough to have the opportunity to partner with the makers of the Invisalign system for complimentary treatment. While the costs involved with Invisalign clear aligners are comparable to those of conventional braces, and I know that in theory we can’t put a price on good dental health and a gorgeous smile, in reality I had already spent years and thousands of dollars paying for two family members in braces at the same time, and I don’t miss it. Writing a series about our experiences with Invisalign treatment is something I’m happy to do, but I first checked (and rechecked!) that I’d be allowed to share everything, not just the “good” stuff.

Off we went to a new orthodontist for a consultation. I explained that I was unhappy with how my smile was looking these days, and that my son had never done his “phase 2” braces but probably there wasn’t too much there to correct, after all, his smile looks great, etc. There were x-rays and a lot of picture taking, and then came The Reckoning.

Here is a picture of my smile pre-treatment. 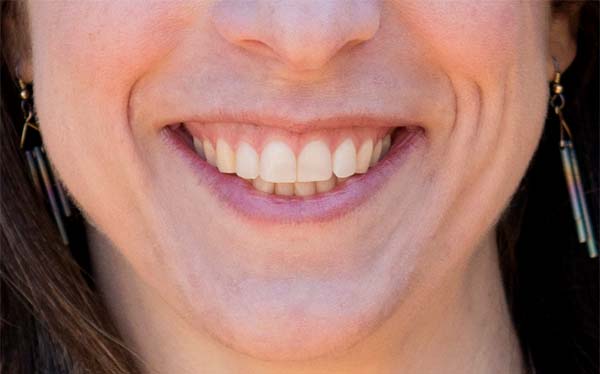 Looking at pictures of myself always make me cringe, but my smile looks pretty good from the front, right?

Now here are a couple of renderings they did from the 3D modeling of my teeth at the time of assessment. 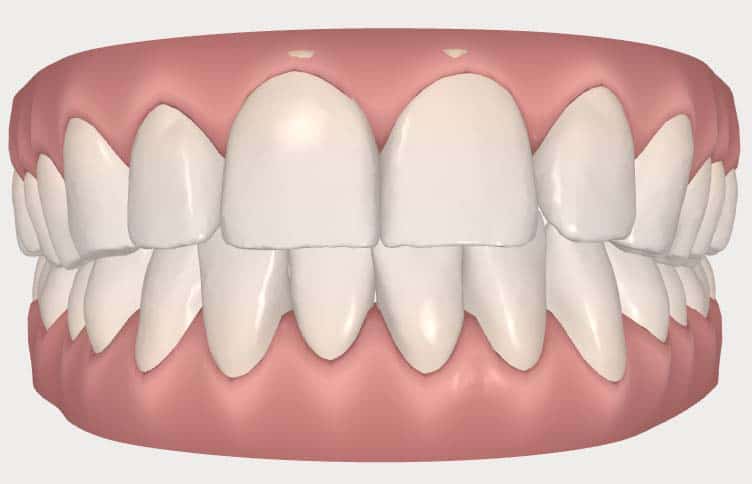 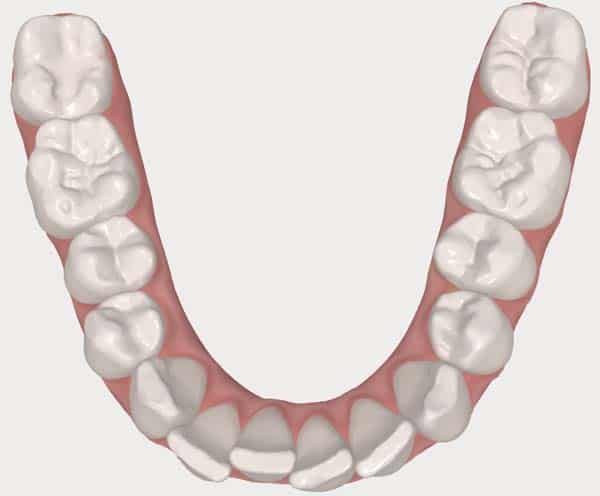 Even looking close-up of the front of my teeth isn’t too bad—you can see that the midline alignment (comparing the line between the top two teeth with the one between the bottom two teeth) is slightly off, but it’s not awful—and it’s not really until you get to the picture of what’s happening with my bottom teeth that you might understand why I was there. Okay; nothing unexpected in any of that (to me).

And then they took my son back for his pictures.

I mentioned his smile looked fine, right? I mean, look at this grin: 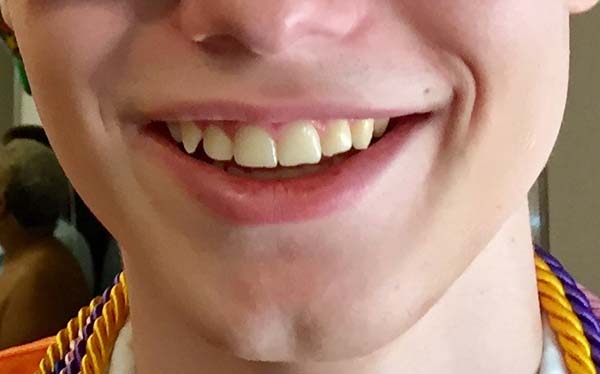 Buuuuuuut then we looked at both the pictures and the 3D modeling of his teeth. 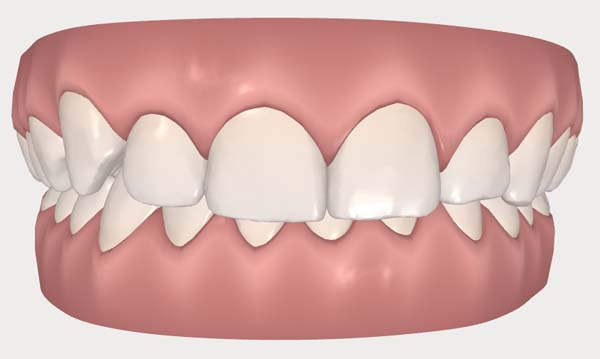 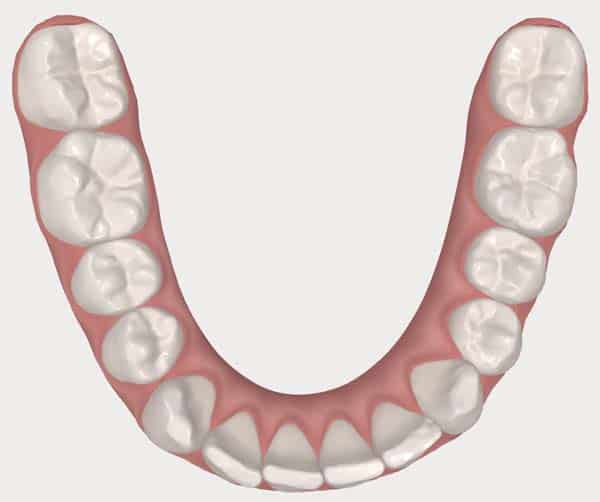 I nearly crawled right out of my skin when they started talking us through all of this. He has something called a “deep bite” which is not only aesthetically displeasing (it’s why you can barely see his bottom teeth in the rendering), it’s considered one of the most serious disorders of teeth/jaw health, and can present significant issues over time. At just 17, my son already had so much wear and chipping on his lower teeth from this condition that the orthodontist ended up filing and shaping his teeth some before we even began treatment (more on that, later). His lower teeth are almost all tipped inward toward his tongue, with crowding on one side and a significant gap on the other. And his midline alignment? Ummmm….

Needless to say, it was a good thing we were there.

After I picked myself up off the floor and finished apologizing profusely for apparently not noticing that my child’s mouth was all kinds of messed up, we started talking about plans. With the Invisalign system, the initial estimates were that my treatment would take 10-12 months, and my son’s would take 12-15 months. We were shown a sample set of aligners and a model set of teeth onto which they could be affixed. The orthodontist explained that while part of the allure of Invisalign treatment is its (relative) invisibility, conventional braces can both push and pull, while Invisalign aligners can only push (that’s the downside of not having wires), and even that pushing can sometimes be difficult when you’re dealing with smooth plastic and smooth teeth. To facilitate movement, sometimes they add “attachments”—small tooth-colored bumps of various shapes/sizes, made of dental bonding material, which are glued directly to the teeth—prior to treatment to give the aligners better purchase on teeth requiring movement. (I’ll be talking about attachments more in the next installment of this series.) In addition, my son would be getting “buttons” on the sides to allow him to wear rubber bands along with his aligners, given the greater severity of his misalignment.

Finally, I was asked if everything sounded good and if we wanted to proceed. I looked down at all the pictures of our teeth on the desk in front of me. “Let’s do it!”

Tune in next month to read about our fittings and the initial adjustment to treatment.