Twitter Facebook Pin It Email Article
Prev Back-To-School Countdown Poster Printable! Next An Open Letter To Milton Bradley Regarding The Game of Life 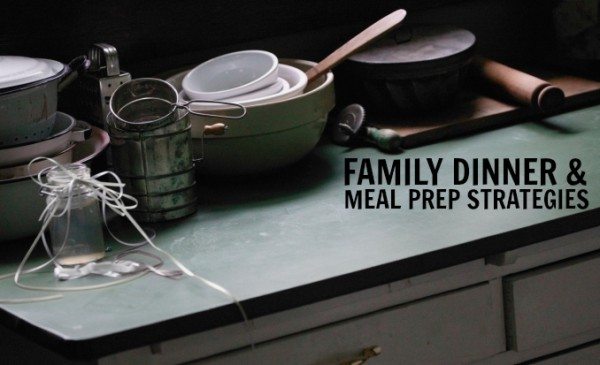 When Dinnertime Becomes a Dinnersaga

So this isn’t going to sound like a problem starting out, but my husband is an excellent cook. Seriously, probably the best cook I know. He’s also home with our 11 month old daughter full-time. The issue is that, now that he spends his days dealing with an exhausting baby, we both end up treating that first hour after I get home from work as well-deserved down time. So if he starts working on a masterpiece meal after that…we’re eating a lot of meals at 9:00 PM. I feel like it might be time to switch to a few more family-style recipes, and for me to start cooking dinner more than 3 times a year (I actually like to cook…but I inevitably end up leaving a single droplet of water on his perfectly seasoned cast iron pan, or MOVING THE SALT AN INCH TO THE RIGHT OF ITS PERFECT PLACE, so it’s easy to just let him do everything). It seems like your family eats pretty well despite being busy people…do you have any secrets? Any secrets that conveniently leave no trace that you ever even looked at anything in the kitchen?

Haaaaaa, yes. YES. I also married a man who is a wonderful cook, and who generally loves to cook, but who also maaaayyyybe occassssssionally tends to be a little too ambitious and gets a little carried away in the face of a delicious-sounding recipe that he just HAS to try. Right then! On a Tuesday. At 6 p.m. After completely neglecting to read it all the way through, thus skipping the step that involves like, two and a half hours of cooking time plus an hour in the fridge and whaaaaattt?

(We are also a couple that has “issues” when we cook “together,” as Jason is a clean-as-you-go cook and I’m the sort who lets everything pile up into a mountainous pile of ingredient-caked ruin to deal with when I’m done. Thus he gets an eyelid twitch from the mess I make, then he follows me around and cleans up things I’m still using. We drive each other INSANE.)

Honestly, you guys will eventually be FORCED into better cooking/meal planning habits as your daughter gets older. You’ll need to get dinner together and on the table at a more reasonable time for her sake, lest you be making HER a meal of nuggets at 5:30 while you guys get the duck a l’orange at 11:45. And if you do that, I will know, and I will find you, and I will…uh. GLARE AT YOU TIREDLY. Or something. And may lightly smack you in the head with that Ellyn Satter book.

But now is as good of a time as ever to start moving dinnertime up to something that your daughter could realistically join in — 11 months old is a GREAT age to start including her in family meals and modeling good table manners and eating habits. So here’s some things that work for us:

1) CROCK POT. Don’t let your husband get in a snobby snit over the Crock Pot. It’s God’s gift to busy families and it’s NOT just for watery overcooked stews anymore. There are some really, really great slow cooker cookbooks out there that will blow your mind with what’s possible to make (and make WELL). You do all the prep the night before. Some recipes cook overnight and then rest in the fridge, while others just need to be turned on at some point during the next day. Some you serve right from the cooker, others benefit from a nice sear on the cast iron or grill — either way, your dinnertime duty just got demoted down to whipping up a salad or side, rather than putting the whole meal together from scratch. Your husband can still stay up late making his masterpiece…but it will be ready at a more realistic time the next day. We really love the America’s Test Kitchen Slow Cooker Revolution series (here’s volume one and volume two is available for pre-order) — think barbecue ribs, jerk chicken, ragus, etc. (And it’ll also help you learn to modify other non-Crock-Pot recipes, since it’s very educational.) We also use this Indian Slow Cooker cookbook since we loooooove Indian food. If there’s any ethnic food that’s a favorite of yours, there’s probably a guide to slow cooker versions out there. (Oh, and Smitten Kitchen has great slow cooker recipes. Have I mentioned the brisket? I believe I have mentioned the brisket. OMG, the brisket.)

2) MEAL PLANNING. This was a hard one for me. I liked deciding what I felt “in the mood” to eat each night, rather than committing to “Okay We Will Make Turkey Meatballs On Wednesday.” But that’s what we have to do in order to get reasonably-priced meals on the table by a reasonable time each night. Before we go grocery shopping we each get a couple votes on what we feel like eating/making that week and we make sure we have all the ingredients. If the recipe on the docket for Monday requires extra prepping time, we can plan accordingly for it. (Make a marinade on Sunday, or I set a reminder on my phone to do X, Y or Z when I get a minute in the afternoon. Get meat defrosted, vegetables chopped, let something come up to room temperature, etc.) Having a meal plan for the week has the extra bonus of reducing our food waste — no bunches of rotting vegetables getting tossed because we never got around to using them. We only buy what we actually plan to make that week.

3) EXPERIMENT ON THE WEEKENDS. Jason loves trying new recipes, but whenever he does it on a weeknight, it ends in semi-disaster. It takes longer than he expected, the kids are whining and can’t wait any longer, we’re missing some key ingredient and have to find a weird substitution, etc. So now, before anything can get added to the weeknight rotation, we try it out on the weekend. Practice! Plus it gives us a chance to see if any aspect of the recipe can be done ahead of time or if there are any other shortcuts we could take.

4) PREP/STOCK UP ON THE WEEKENDS. Make your go-to meat marinades and sauces and freeze them. Stale bread + herbs + food processor + freezer = all the seasoned breadcrumbs you’ll ever need. Chop up your onions/carrots/celery and bag it up all portioned in the fridge. Make and freeze dough for pizza, rolls, etc. Even if your husband still wants to whip together an improvisational masterpiece on Tuesday, there are still probably some basic building blocks he uses regularly that you can prep ahead of time.

5) DO WHATEVER YOU GOTTA DO. Look, the first hour after you get home from work? Absolutely 100% deserved down time and I would never mess with that. But let’s say the hour BEFORE you get home, your daughter maybe watches some Blue’s Clues from her play yard while your husband at least gets the ball sort of generally rolling in the direction of dinner. That would…not be terrible. Or all that different from hundreds of thousands of homes across the country around the witching hour. If he could commit to at least THINKING about dinner by say, 4 pm, he could at least get meat defrosted, oven preheated, chicken in a bag of the marinade you made a couple nights before, etc.

While Jason and I aren’t awesome at cooking together, we do operate in shifts. I take the first prep shift because I’m home and can start getting stuff together, then he comes home and will take over. We hang in the kitchen together and talk, so it’s a hybrid of active cooking and downtime — maybe I’ll make us a cocktail while Jason sears the meat, he’ll roll out dough while I make pot pie fillings, we both sit down and relax while the chili (made with a spice blend we make in bulk and keep on hand) simmers unattended because ahhhh, easy meal. The kids might be in the backyard or watching TV or just beating the crap out of each other in the basement. Meh. They’re fine.

It’s great that your husband cooks and enjoys it, but he does need to start planning it out a bit…not better, but tighter. Dinner just can’t happen at nine or 10 p.m. anymore, so if he wants to be ambitious and make gourmet meals every night, that’s fine: Just find the shortcuts and do-aheads, much like he would in a restaurant kitchen. Agree that maybe on Friday nights, you’ll make some mac-and-cheese for your daughter and he can go nuts on a later meal just for you, but the other weeknight meals need to happen at a more realistic time, even if it means simpler recipes, a slow cooker or — GOD FORBID — you are allowed in the kitchen to help out even though you never put the salt back in the right place.