Beginner Board Games: The Yay to the Nay

Building on last week’s post about beginner card games, today I will review some beginner board and dice games. Also, having had an additional week to play the games with my daughter, it was interesting to see which ones she continued to gravitate towards and which games she greatly improved on.

I’ll be judging each game based on the quality of the game, the family enjoyment factor and on my toddler’s ability to play them. 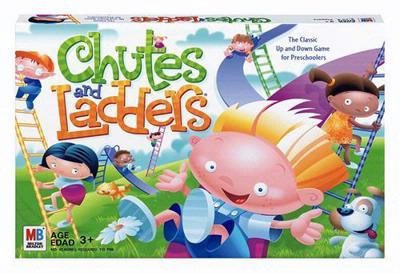 I don’t think I need to explain Chutes & Ladders since we’ve ll played it as a kid. I picked it over Candyland because I thought teaching Mazzy about good behavior (you wash the dishes, you climb the ladder, etc.) was an important lesson as opposed to encouraging her obsession with sweets.

However, I believe Candyland has a much easier path to follow for a child new to games, while Chutes & Ladders is structured in a numbered grid, making it harder for Mazzy to understand where she is supposed to move her piece. Even I got confused as to which direction I was supposed to go on the board. Plus some of the teachable behaviors are a little questionable— why exactly am I punishing my child for trying to clear the dishes but dropping them by accident?

Mazzy gets bored with this game fast— I think because she has no idea what is going on— and so, we have yet to complete a game. 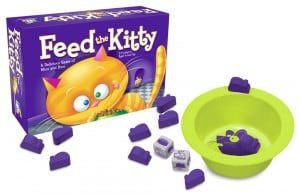 Feed The Kitty is a dice game in which the last player to hold onto their mice wins. Each turn, a player rolls the dice to determine if they have to take a mouse or give one up. The dice have pictures like a mouse (take a mouse), a cat bowl (put a mouse in the bowl), an arrow (give a mouse to the player on your left) and a sleeping cat (do nothing).

The game encourages counting skills but I don’t think much else. Also, you would be surprised how many times a roll of the dice results in doing nothing (two sleeping cats or one mouse/one bowl). It was also hard for her to understand that holding on to her mice (doing nothing) was a good thing because putting a mouse in the bowl is more fun.

I know this game is a little above her age level, but I don’t think it would be very exciting for older kids even if they understood how to play. It certainly wasn’t a lot of fun for me. It does teach winning and losing but, this might be a concept too advanced for my daughter. When I told her she won, she clapped her hands and yelled, “Can you win too?!”

Although I initially was not crazy about Feed the Kitty, after two weeks, Mazzy continues to ask to play this game and I am now impressed that she knows exactly what to do based on the dice roll. 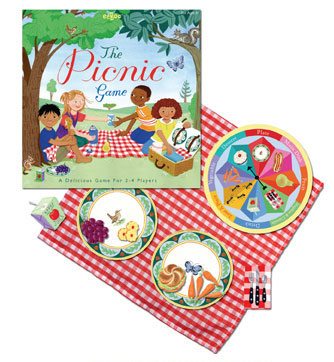 The Picnic Game by Eeboo involves laying out a tablecloth and spinning a wheel to fill your plate. There are vegetable options, fruits, main courses, desserts, drinks, napkins and plates. To win, you must have a napkin and plate with a food from each category. If your spin lands on ants, you must give a food up.

This game teaches taking turns as well as the importance of a full-balanced meal. It is supposed to be for 5+ but it is Mazzy’s favorite game by far. She likes selecting her different vegetables and fruits, loves spinning the wheel and fully understands having to give something up when she lands on the ants.

The only aspect of the game that I didn’t introduce was needing to land on a plate before you could start filling it. This seemed like an easy way to make it more age-appropriate.

After two weeks of playing The Picnic Game, this continues to be Mazzy’s favorite game of the bunch. She now likes to sort and separate each of the foods into its groups before we start to play, adding yet another level of learning.

The most important thing I learned during this process is that you really need to play a game a bunch of times before you write it off as something a child is not ready for. I’ve always loved games and find playing them to be a really exciting new way for me to interact with my daughter.

Now if I could only get her to understand Words With Friends….