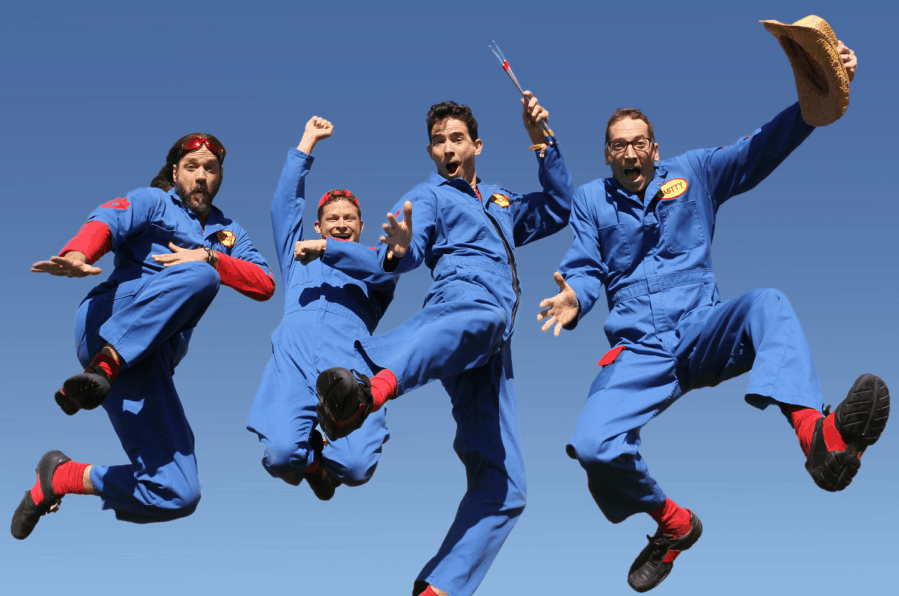 The Imagination Movers Are Back! (Watch them at Home)

This was not your typical music festival band. Then again, how many music festivals have a stage set aside for music just for kids? Grammy award-winning kids musicians like Tim Kubart have performed here. The Q Brothers are there every year, led by rapper and actor (most notably in “Drumline”) GQ. And Lisa Loeb graced this stage in 2019, as well.

The crowd at the Austin City Limits music festival was on its feet, dancing to the music, clapping along, and smiling. There was a whole lot of smiling in this crowd. I had my hands up in the air and I was singing along to the songs I had learned by watching this band on TV when my son was in preschool. 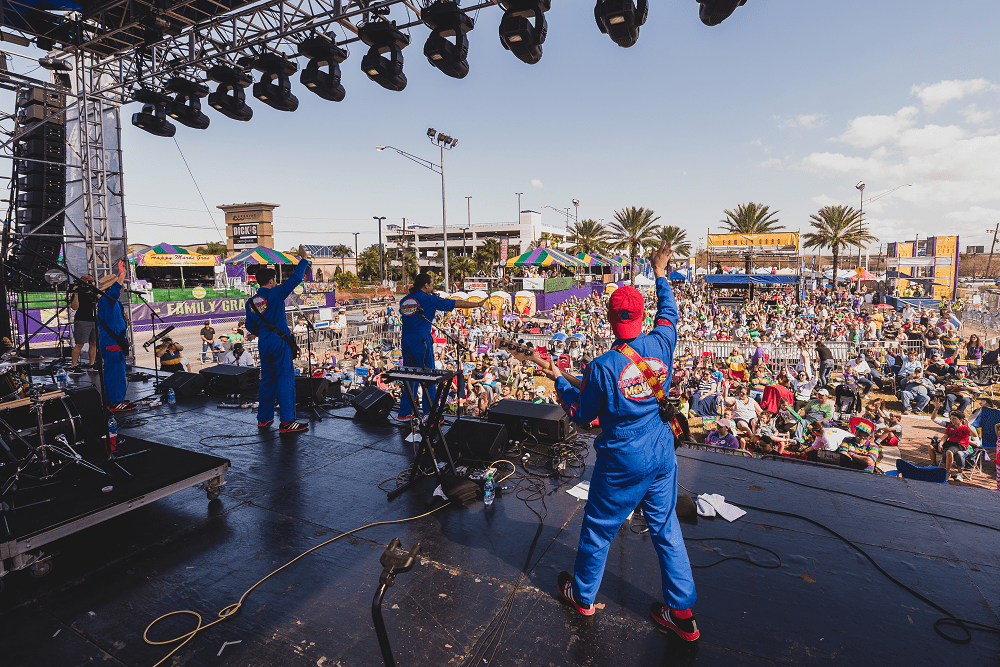 view of Imagination Movers from behind and seeing audience

The Movers– as they call themselves –are Emmy winners themselves, earning their awards for all three seasons of their musical show on the Disney channel. And now, they have come full circle with their show on the brand-new Disney Plus on-demand service  (which premiered last month on February 28). A new set of kid (and parent) viewers will see band members Rich Collins, Dave Poche, Scott “Smitty” Smith, and Durbin, as well as friends Nina, Warehouse Mouse, Uncle Knit Knots, and more.

It has been a long road for the Imagination Movers, who met as neighbors and friends in New Orleans before Durbin floated the idea for a live-action TV show to the rest of the guys in 2002. They were at Durbin’s son’s first birthday party (which, incidentally, was hosted in a Lawrence Welk show theme, complete with bubbles) when Durbin planted the seed. By the next year, at a birthday party for Collin’s daughter, the Imagination Movers had written several songs and played a few for their families.

In their courtship with Disney, the Imagination Movers said no twice to the media giant before signing. They originally wanted to go the PBS route and they wanted to own their own content. But then Hurricane Katrina blew in.

“After Katrina, we had to push back our grass-roots efforts,” Durbin says. “Three of the guys lost everything they had. My job, Dave’s job, gone. What we had on the table was a deal with Disney and the deal had gotten better with time.”

Their first Disney episode debuted in 2008, with what Durbin says is 80% of the original template they had pitched to PBS. To Disney’s credit, they allowed us to be what we had envisioned, he says. 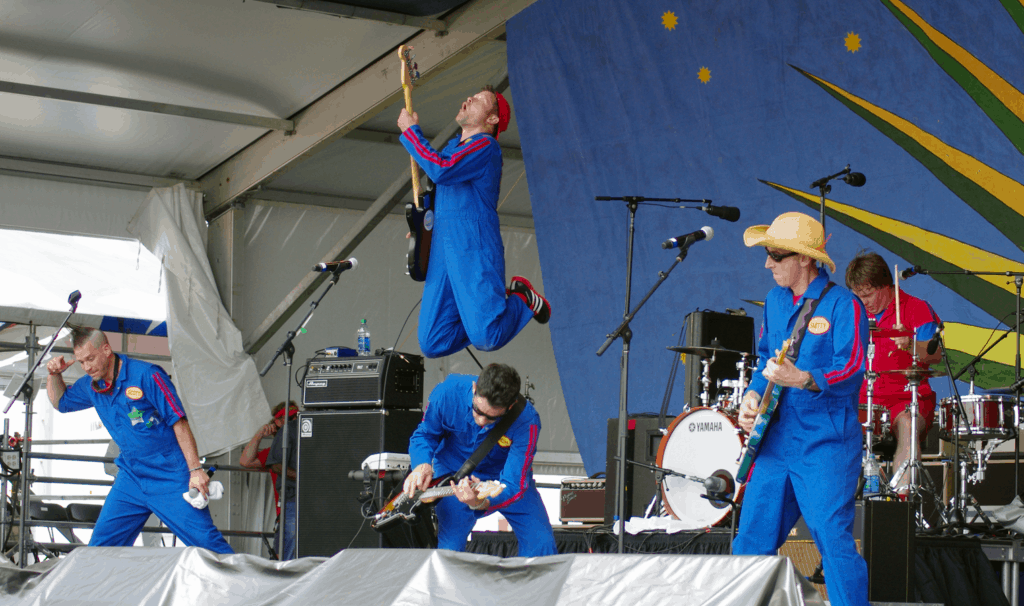 “I’m super proud of the legacy we left with that show. We were about challenging the audience instead of pacifying them,” Durbin says. “We had one show in which Warehouse Mouse had a toothache. We thought it was important to introduce the word ‘veterinarian’ and explaining what it was instead of reducing it down to ‘animal doctor.’ Kids will rise to the occasion.”

Now the father of two teenagers, Durbin knows it’s important to have authentic communication with his kids. Too often, he says, we shield them from reality and there are times when you do want to watch and evaluate to see if it’s going to challenge your kid or be what he calls “zombie food.” He points to Fred Rogers’ honesty and approachability with kids, tackling tough topics like racism and nuclear war in ways children could absorb on his show.

“For us, we were aware that there are teachable moments. Like gender fluidity and learning more about it rather than hiding it and pretending it doesn’t exist,” he says. “Ignorance is a foible we fall into rather than seek knowledge. Instead of making a huge issue out of it, we can be available to answer questions and be a reliable source. Young kids see the world and we need to help them process it; running away from it doesn’t help.”

The band focused on introducing brainstorming into the vernacular of a toddler at the beginning, along with the concept of problem solving. Each Mover represents different ways to problem solve. As the band’s kids grew up, so did the themes. And in 2018, Lisa Loeb collaborated with them to record a song from the point of view of the parent about kids growing up (“Butterfly Wings”).

“In today’s culture and media, it’s so hard for kids to be kids. It’s part of our passion: you’re only 8 once, so don’t be afraid to go play and not worry about being cool,” Durbin says.

After three full seasons of filming and touring, the guys were tired out, physically and mentally. Over those three seasons, the band filmed 75 episodes of their series. The show aired in more than 55 countries and they sold half a million CDs and DVDs. Over that whole time period, not one member of the band was ever late or missed a day due to illness.

“As soon as filming stopped, we were touring,” Durbin says. “We were exhausted and still trying to be good dads and husbands; we realized we needed more balance. We took our foot off the accelerator.”

The Imagination Movers are now “weekend warriors” and play over the weekend, which helps them find balance in their schedule. Plus, they tour about once or twice a month; they have an extended run in Canada currently,  they perform at Navy bases abroad, and they have done tours in Europe and in Asia.

The Movers support two organizations to pay it forward: The National Down Syndrome Society (NDSS), an American organization that offers support to people with Down syndrome, their families, friends, teachers, and coworkers, and educates the general public about Down syndrome. They also support St. Baldrick’s for kids with cancer.

“It’s really cool when you get a big hug from a kid who loves our music,” he says. “It’s great to hear the stories about kids who learned their first words from us. I don’t want to sound melancholy, but childhood is such a wonderful experience and time and I’m so proud we have had the opportunity to address all of the themes and subject matters that deal with that in a healthy and positive way.”