I like to talk about birthdays here at the Buzz Off about twice a year, usually in November and March because these are the birthday months of my kids. March slipped right past me but I have this folder full of great ideas to add to our vast birthday party collection. To refresh your memory: 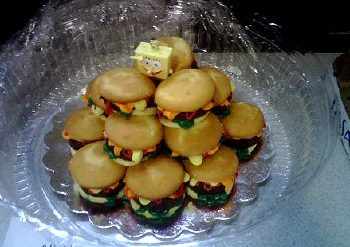 Last night my husband’s, er, my son’s Cub Scout pack held a cake auction. It was our first year so we didn’t know what to expect and arrived with two cakes to put up for auction that seemed quite nice at home and incredibly lame at the event when surrounded by very imaginative cakes. Including this Krabby Patty Cake, pardon the grainy photograph I didn’t have my good camera, my friend Jodi came up with, as she said, “All by herself.” She didn’t snag the idea from a book or magazine, it’s all out of her brain…and even better, it was really simple.

She made 12 cupcakes with nice rounded tops. She cut the tops off and used them as the top “bun” and the bottom piece as the base for each Patty. She also baked a layer of chocolate cake in a jelly roll pan and cut circles out of it to make the actual “patty” part of the burgers. To finish the look she used red, green and yellow decorator frosting to apply the condiments. (FYI: Her cake brought in $40 at the auction. Ours brought in $5. Nice!) 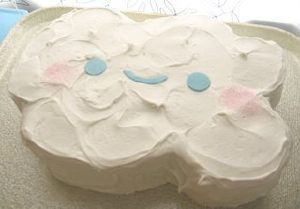 I came across this adorable cake yesterday via Sk*rt and think it would make a great first birthday cake. It would also work for any spring or garden themed party. There’s no tutorial here, but it looks to me like two sheet cakes stacked together and trimmed into the shape of a cloud. 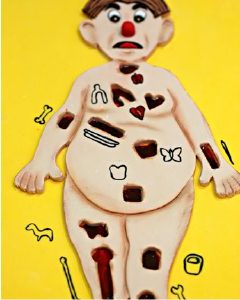 I’m pretty sure I’ve shared I Dream Of Cake before and made a little joke about how easy it would be to whip up one of their confections. (Snort.) Not really but it’s such a beautiful site I think you should have a look at their cake gallery. I’m pretty sure there’s a way to recreate the “Operation” cake without too much effort and take a look at the building block cake. 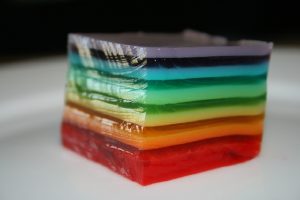 Instead of cake you could try this exciting rainbow jello concoction. The process is a bit time consuming, but not particularly difficult and on the plus side no dealing with frosting. Jello is one of those simple pleasures my kids can’t get enough of and made up to look as striking as this one, who needs cake? 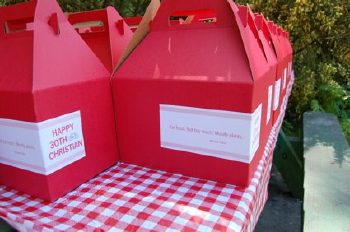 As far as inspiring (yet not overwhelming) birthday party themes I found a few new ones for this edition. At Oh Happy Day Jordan helped a friend create these clever boxes for a birthday picnic. This party was for an adult’s birthday, and the food inside makes that clear. Unless you have one of those kids who happily eats red pepper and goat cheese sandwiches, and if that’s the case good luck finding enough of your kid’s friends who will eat that. But the idea could be easily changed out for kid friendly food. Perfect for an outdoor party at the park or even at the swim club in the summer. 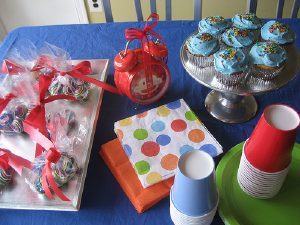 Design Mom shared her son’s fourth birthday party theme back in January. It was a Round and Round party where the decorations and food were all….round. I’d love to make every birthday party for my kids a circle theme, there’s something so festive about polka dots and honestly circle decorations are incredibly easy to make.

Finally I ran across this idea, which seems perfect today as it’s Earth Day, a greener birthday party for your kid. Cindy Fay offers up several great tips including cutting some of your child’s artwork into large triangles and repurposing it as a string of flags for decorations. Instead of using latex balloon, use Mylar and repurpose them as gift wrap later. This is some really good information.

Have you seen any inspiring birthday ideas recently? Leave them in the comments!