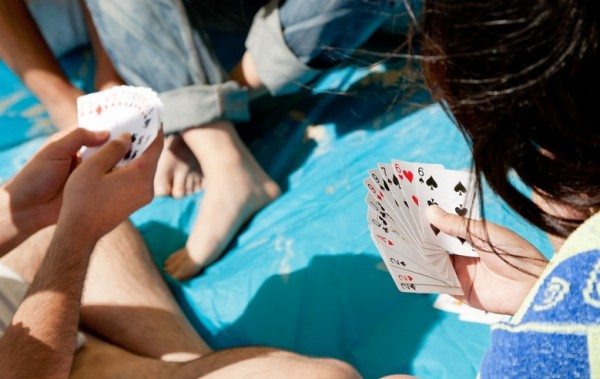 Card Sharks: Fun Games To Play With Your Kids

My boys came home from two weeks spent at summer camp and on the drive home, I asked them to tell me their favorite activity. I expected to hear them rave about the jet skis, the pool slides, the dances, or the awesome sport courts, but their answers came as a huge surprise. “Cards,” they both said. “We loved playing card games.”

“Well that would have been nice to know before I spent thousands of dollars on camp fees,” I thought to myself. “Next summer I’ll plop down $2 on a pack of playing cards and call it a day.”

I’m kidding, of course, because the truth is that I’m actually thrilled they found something to do with their cabin mates that didn’t require batteries or Wi-Fi. We also play cards as a family quite often, and it’s some of the most fun we have together. And, judging by the summer fun photos I see on Instagram, it’s something a lot of other families love to do, too. After all, you can take a pack of cards anywhere and instantly set up a game. Perfect for those times you’re stuck in an airport or in a cabin for a week of family fun.

So, with that in mind, here are just a few classic and not-so-classic card games to play with kids. Click on the name of the game for a link to a website that details the rules more than I ever could. (Note: These games are all played with a traditional 52-card deck; I’m not including specialized games like UNO or SET.)

Go Fish
This is probably the first card game every kid learns. I know it was for mine. In fact, I still remember little 3-year-old Jack yelling, “Go fwish, mommy!” Awww, now I’m sad. Anyway, this game is super easy and fun. Best for ages 3 and up.

Crazy 8’s
This is another game that younger children can easily figure out. Similar to UNO, players have to place cards from their hand that matches the one on the deck. And the 8’s, just like your kids after playing this for hours, are totally crazy.

Concentration
Another great one for smaller kids, this is basically a matching game. All cards are placed face down and the players turn two over at a time, hoping to get a match. Kids must use their powers of memory, or concentration, to remember where certain cards are in order to find them again. Maybe I should start playing this myself now to boost my memory since I’m in my 40’s and forget pretty much everything.

Spoons
My friend Ann Imig loves to play this easy, fast-paced game (also known as Pig or Tongue), with her boys. Spoons are placed in the middle of the table and once a player gets four matching cards, they silently (or not so silently) remove a spoon. Other players must then grab one, with one player being left spoonless. Sort of like Musical Chairs, but with cards.

Slapjack
This is a very, very easy game for young kids and gives them permission to actually slap something, which is always appealing to the preschool crowd. (Although, if you, like me, have a kid named “Jack,” your other kid will spend days yelling, “I’m playing Slapjack!” and smacking him. Good times.)

War
This is a fun, fast game that can be played with two players or more. Kids just need to be able to know which cards are higher in rank than others (personally, I think Queen should go above King, but that’s just me), and then they can go to “War.”

Euchre
This is a very, very popular game with many of my friends and their kids. I confess that I don’t quite get the rules yet, but I really want to learn it. After all, they play it for hours and hours and have a rollicking good time. (Yes, card games can be rollicking. At least here in Austin, Texas.)

Blackjack
Now we’re talking. Also known as “21”, my boys are crazy for this easy casino game and not just because their uncle is a Pit Boss in Lake Tahoe and passes on his wisdom. This can be played with just two players, a dealer and a, um, dealee? Anyway, my boys love this so much that I’m a little worried about our trips to Nevada to visit my parents.

Texas Hold ‘Em
This is another game that my boys played non-stop at camp. They even insisted we buy them casino chips so they can pretend they’re really playing at a high stakes table instead of our slightly stained coffee table. (And if there’s anything cuter than a 12-year-old boy saying, “I see your $1,000 and raise you $5,000, Mom,” I don’t know what it is.) There are many rules and variations on poker, of course, but Hold ‘Em seems to be one of the easiest to pick up.

Of course there are thousands of other card games out there. So many that Bicycle Cards even has a new searchable How to Play app with rules for over 75 games. There also some great books that have a lot of card game ideas, like:

1. The Book of Cards for Kids

2. Hoyle’s Modern Encyclopedia of Card Games: Rules of All the Basic Games and Popular Variations

So grab a deck of cards, find the kids and sit down for a few hours of fun with some of these games. You’ll have a great time no matter which one you play—well, just as long as it isn’t 52 Pick-Up.

Tell us what your favorite family card games are to play!